This summer, the UK’s favourite reality dating programme clothed its stars in second-hand threads from eBay to promote circular fashion. But following their exit from the villa, contestants have already secured record-breaking deals with fast-fashion companies.

Love Island season presents the opportunity to witness good-looking people argue, neck each other, and regurgitate lines like ‘you’re my type on paper’ on national television while wearing multiple outfits a day – all in the name of love.

Aside from occasional jaw-dropping moments, the islanders’ fashion choices play a significant role in ensuring the villa remains visually interesting, as very little changes in terms of scenery or setting over 8 weeks of daily broadcasting.

And while contestants of previous instalments were predominantly clad in fast-fashion brands like PrettyLittleThing, Missguided, and I Saw It First, this summer’s cast regularly donned pre-loved items from eBay thanks to a novel partnership between ITV and the resale platform.

Attempts to inject consumer consciousness into a show previously vilified for promoting fast fashion companies may have worked while on air, but the influence of eBay has proven to be far from long-lasting.

Just one month after the show has ended, numerous contestants have signed lucrative brand deals and partnerships with the aforementioned brands, signalling that the Love Islander to fast-fashion influencer pipeline won’t be slashed so easily. What is the environmental impact of bright clothing dyes?

The link between Love Island and fast fashion

Though an exact figure hasn’t been disclosed, it is common knowledge that Love Island contestants receive a clothing allowance before arriving to the villa and throughout their time on the show.

Because they’re required to wear unbranded items on screen, contestants – usually looking to get the most bang for their buck – don’t opt for logo embellished luxury items and have routinely leant on fast-fashion brands for their get ups.

This alone creates a massive marketing opportunity for brands looking for more exposure.

With an average 3 million viewers tuning into Love Island each night, the brand I Saw It First saw a 67 percent increase in sales after becoming a programme sponsor. When fifth season winner Molly-Mae stepped out in a dress from the retailer, it sold out in under ten minutes.

Searches for certain patterns and designs also skyrocket after being worn on the show, with entries for ‘marble dress’ and ‘hot pink co-ord’ rising an average of 120 percent after last year’s winner Millie Court wore them on screen.

Such figures illustrate the market power these once-regular people hold after featuring in the show and (in this economy) you better believe they’re exiting the villa with the prospect of being paid for that power.

The jump from Love Island contestant to brand-boosting influencer is now so expected that online articles predict which brand deals islanders’ will go for ‘based on their vibe’.

But why do ex-Islanders continue to sign on with brands known for having factories with poor working conditions, human rights abuses, and plastic-pollutant fabrics? I’m sure pay-outs in excess of six-figures don’t hurt.

Despite network attempts to promote sustainability, the winner of this year’s Love Island, Ekin-Su Cülcüloğlu, signed a record-breaking deal with fast-fashion brand Oh Polly. Her deal is said to be worth £1 million, the largest sum offered in the show’s history.

In the latest news, runner-up Gemma Owen has just signed a six-figure deal with PrettyLittleThing. It’s the first since Molly-Mae Hague – though one might argue money wasn’t a huge pull, being the daughter of a former footballer.

Finalist Tasha Ghouri is the only islander that has carried on with ITV’s pre-loved fashion mission by signing a brand deal with eBay. You’ve got to give Tasha credit for sticking to her pre-Love Island lifestyle, by saying she’s ‘always bought second-hand for her wardrobe’ and not falling into the easy trap set by fast-fashion giants. 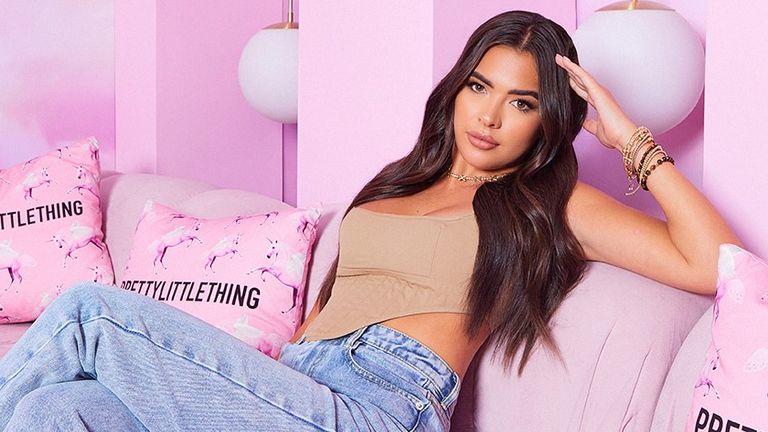 Did the eBay collaboration make any difference?

At least 16 percent of the islanders’ wardrobes were purchased on eBay, and in fact, it did make something of an impact on consumer behaviour in the UK.

Reports from eBay state a 700 percent increase in searches for ‘pre-loved’ fashion thanks to the Love Island partnership and Google searches for ‘eBay preloved clothes’ rose by 756 percent when compared to previous months.

The collaboration also encouraged viewers to re-sell their clothes instead of throwing them away, with listings on eBay increasing by 1,026 percent just three months after it was announced.

There’s no doubt that consumers are becoming more ethically conscious, with over half of UK shoppers saying they feel guilty for purchasing products that aren’t sustainably made.

That said, price is a huge factor when it comes to buying new items and the cost-of-living crisis hasn’t made it any easier to veer from the pull of cheaply made and sold items from SHEIN, PrettyLittleThing, and the likes.

And though I’m not exactly partial when it comes to Love Island, it seems like eco-friendly and ethical fashion remains far from woven into the programme’s DNA.

After several seasons of being sponsored from the biggest names in the fast-fashion industry, it’s difficult to see how the eBay partnership will suffice to undo the damage.