22 year old designer and Prospect 100 winner Ryan Roddy talks to us about his corkscrew sneaker, future career plans, and offers up tips for other Gen Z creatives.

It’s been an exciting few weeks for Ryan Roddy, the brains behind Prospect 100’s winning entry for its latest sneaker design competition.

For those unaware, Prospect 100 offers under 25s opportunities to show off their work and potentially bag career-boosting internships with some of the biggest names in select industries. Its most recent contest asked young designers to submit footwear sketches that were evaluated by judges including Sean Wotherspoon, Jeff Staple, and YEEZY’s Seven Smith, among others. Submissions were narrowed down to a final twenty. Each design was posted to Prospect 100’s Instagram account and competed for likes from the general public. The post with the most votes was crowned the final winner. Ryan Roddy took first place with over 3,000 likes for his unique military inspired corkscrew sneaker design and at only 22 it’s an impressive early career boost. He’ll now be undertaking a six month mentorship programme with Jeff Staple, head of Staple Design.

We sat down over a long-distance Zoom call to discuss his victory and the impact it could have on his career, as well as his love for all things footwear. He was eager to share his experiences and offer his own advice to aspiring teenage designers too, giving us a little glimpse into a niche world that can be difficult to get into if you’re inexperienced. 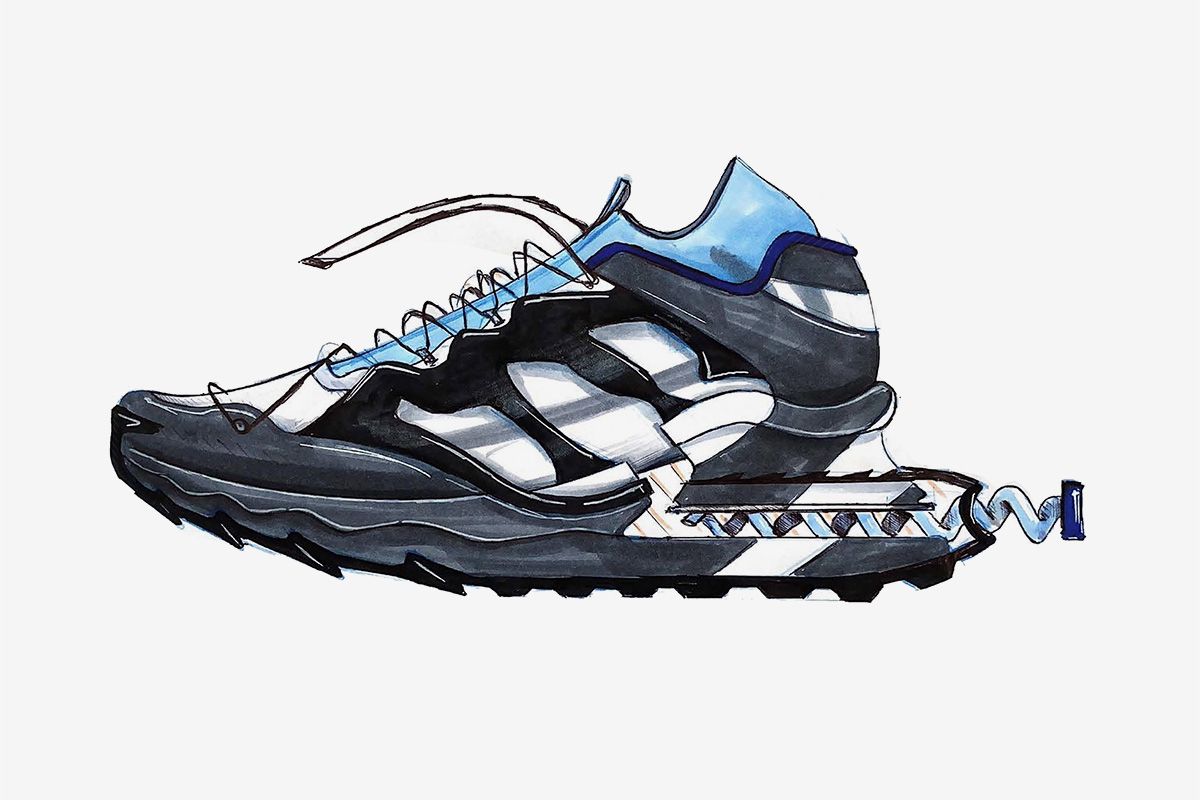 Prospect 100 and getting involved in sneakers

To kick things off, I was keen to know how Ryan learned about the competition in the first place, which he says was a result of his contacts at university in Leicester. ‘My tutor always sends through stuff like this, just to encourage everyone to enter and get involved, as you can wind up winning. I saw how massive it was and how impressive the winning prizes were, and I took it from there’.

While Ryan managed to bag that impressive Jeff Staples collaboration as first prize, Prospect 100 also offered mentorships at the prestigious footwear design school Pensole Design Academy to runners up. There were big incentives to get involved that went beyond just winning, and the extra exposure will no doubt help the twenty creatives who made it to the finals. Ryan is currently studying for a Footwear Design BA (Hons) at De Montfort University Leicester full time and decided he wanted to pursue sneakers during his school days. ‘I’ve always loved shoes, like most young boys. I loved drawing too, and when I got my A-Levels I started to base my art around footwear. I’d look at all the different parts and how they were made, and that’s when I started to look at courses and my options’.

He’s adamant this victory will give him a ‘massive advantage’ in a competitive industry. ‘It’s given me the confidence to keep going and push on. Jeff Staples is one of the biggest names in the game and the fact he’s working with me. It’s amazing’.

The corkscrew design is certainly unique, with an adjustable heel and sleek, black streaks that run along the side of the shoe. I was curious to know where Ryan got the basis of his ideas from – his answer was somewhat unexpected.

‘I did a lot of research before I actually drew anything. I looked at all these weird military vehicles that were used in the early days of orienteering. My two biggest inspirations were corkscrew propelled tanks and the black curved lines you see on Razzle Dazzle ships.’ Comparing them to Ryan’s shoe the influence is obvious, though there’s no promise you’ll be able to use them to glide across water in quite the same way. Ryan’s tips for getting into the craft of sneaker design

Of course, it’s all well and good working your way up to the top of the sneaker world, but how do you get the ball rolling at the very beginning? Luckily Ryan had a ton of useful advice and helpful hints to give aspiring Gen Zers the tools they need to make a start.

He recommends a few software tools that you’re probably best learning and getting to grips with from the outset. ‘I started by sketching by on hand on paper and pads, but I know a lot of people that use Procreate on iPads for the initial drawing and ideas stages’.

To that end, he also mentions investing in Adobe Creative Suit once your ideas start to evolve into full on designs. ‘You’ll most likely use Illustrator. No matter what level you’re at in the industry you’ll need to know both that and Photoshop, they’re the main two to practice on’. It’s an approach he says he was initially reluctant to pursue. ‘I wish before I went to university that I’d learned that stuff, as I’d never liked using computers and thought I’d be able to sketch everything. Obviously that wasn’t the case and you get to a certain stage where you have to use it, so I’d make sure you’re really good at those programmes. I was quite stubborn with it. So my advice would be to never be stubborn’.

Open-mindedness is just as crucial as research, which Ryan stresses was vital to help him find new ideas that he’d otherwise have missed. ‘At the start of any project I’d say just do as much research as you can. You can’t just draw the show and that’s it. Know what you’re doing, learn about colour palettes and customer profiles, those really help. All that really matters’.

Looking ahead to the future

With his recent win in mind, where does Ryan hope to take things in the future? Though he has big ambitions, his answer was refreshingly grounded. ‘I’d like to get my foot in the door somewhere and work my way up. I’d like to look around and explore different brands and gain the knowledge to get to that next level’. Here’s hoping we see Ryan at the top of the design industry before too long – not that I’m expecting we’ll have to wait, mind.

To close things off, he took the time to thank his friends and connections for getting him to where he is right now. ‘I only won this competition because of the people around me and the people who liked that post on Instagram’ he explains. ‘I’d like to say that if anyone wants to know anything more, please get in contact, as that’s how I got started – just by reaching out’. So, if you’ve got any questions or feel like you might be able to gain a little more insight from the man himself, you can always follow Ryan on Instagram here. Maybe you can give him a run for his money in future competitions, or perhaps follow in his footsteps?

I’m excited to see where Ryan takes his work from here on out, particularly as he’s clearly brimming with talent and potential. I have a feeling this is only the beginning of a long and fruitful career from a fantastic Gen Z creative, and before long we may all be running around in tank and boat inspired sneakers.

For more information on Prospect 100 you can visit the official website here. Generation Z are quickly becoming a major focus in the consumer market. What should aviation companies do to keep up with the demands of an eco-conscious demographic? Thinking of travelling abroad this winter for a much-needed ski season? Planning a holiday in the sun for 2023? Perhaps you’ve already taken to the skies and jetted the globe this year. Whichever camp you fall in, aviation is on the rise. After... Almost two-thirds of young people have their sights set on launching a business, and just under half have multiple side projects and freelance opportunities, according to Microsoft. It’s a result of stagnant wages and harder living conditions as goods become more expensive. If you’ve spent any reasonable amount of time on TikTok, you’ll probably have stumbled on at least a few millennial ‘hustle’ or ‘money making’ videos that promote...