The self-proclaimed ‘full-time changemaker’ is part of a growing phalanx of Gen Zers determined to shape our planet’s future. I sat down with this pioneering environmental activist to discuss the importance of empowering young people to step up, rather than shut down, against the climate crisis.

These are the words of Melati Wijsen, an environmental activist who, at age 20, has already taken more strides towards safeguarding the future of our planet than the majority of us can say we have in our whole lives.

In 2013, Melati and her sister Isabel founded Bye Bye Plastic Bags, a movement that quickly became a global youth-driven sensation for its success in convincing Bali’s governor to ban single-use bags, straws, and styrofoam across the island. 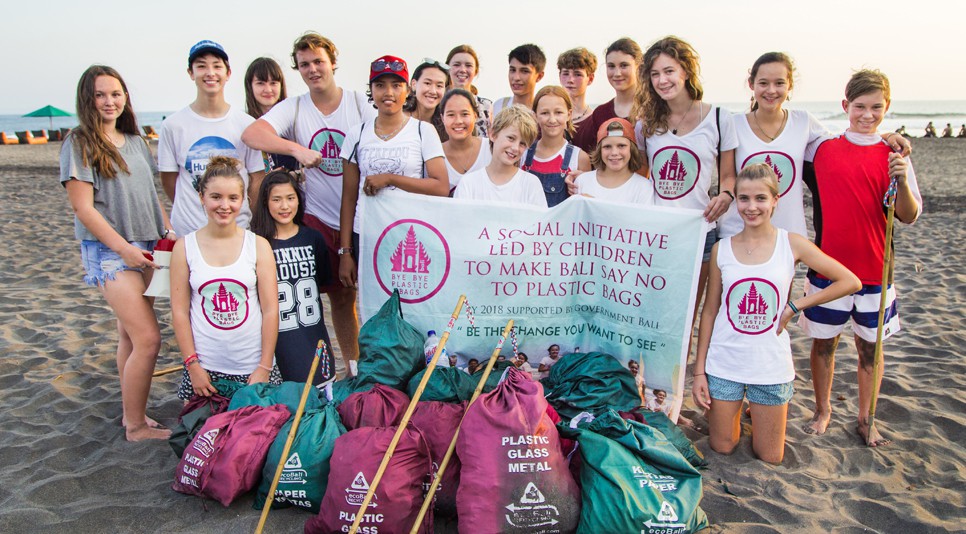 Born and raised there, Melati tells me that her dedication to protecting the environment stems from a strong connection to her natural surroundings developed during childhood, and that ‘it wasn’t rocket science’ to understand the hugely damaging impact of human life on her home.

‘The decision to dedicate myself to this cause was easy,’ she explains. ‘Seeing so much plastic pollution made me want to do something about it. There was no escaping it, it was simply everywhere.’

Just 12 at the time, Melati refused to wait until she grew up to start making a difference, trusting in her passion and pure intentions to bring about change.

‘I had a voice, I believed in something and that is all that mattered,’ she adds.

This mindset is one echoed by her demographic. Gen Z is the first to experience the repercussions of the climate crisis up close and isn’t motivated by ego, money, or a political agenda, but instead an innate sense of responsibility that it’s their duty to do the right thing. After all, there is no Planet B.

‘We’re at the most important tipping point in history and we do not have the luxury of time,’ she says. ‘As young changemakers we really embody this. It’s an everyday battle to challenge the comfort of the status quo, but we’re continuously there on the front lines doing what we can.’ It’s this unrelenting ambition and faith in her generation that’s carried Melati into adulthood, shaping her into the ‘full-time changemaker’ she describes herself as today. And, while she may be young in years, Melati is a poised and practiced speaker who has captured the attention of world leaders at international conferences and inspired millions with her Ted Talks.

Throughout her activism journey – from project to mission to life’s work – she has remained firm in her vision that young people have a responsibility to ensure they’re pushing for tidal change and a future they want to be a part of.

‘Instead of asking “if” the change is going to happen, we must ask “when” it will happen,’ she says. ‘The technologies, the innovation, the bright minds are here, it is just about connecting the dots – I believe that today’s youth can do that.’

However, galvanising them to act often has its complications, namely because (as Melati puts it) genuine change takes place in the classroom and the current education system is, in her opinion, considerably outdated.

After almost eight years of public speaking with students her primary audience, Melati tells me that the number one question she is still asked, regardless of where she is, is ‘how can I do what you do?’

There’s no denying that her resilience to save the Earth has been there from day one, defined by a conviction that if you ‘stand for something that’s bigger than you, part of a wider mission,’ there’s no telling what you can’t achieve. Does climate change legally infringe on the rights of those yet to be born? Young women have found their niche in climate activism Though she stresses that without the support system in place to guide her through the early years of being a teenage activist, as well as a school that fostered a space for her to grow, she wouldn’t be the person she is today.

This laid the foundations for her latest social venture, YOUTHTOPIA, a community-centric learning platform and youth empowering ecosystem that seeks to make changemaking accessible to all.

It’s doing so by offering peer to peer programmes, masterclasses, and workshops designed to prepare today’s youth for the real, urgent issues we’re facing on a day-to-day basis in a way no textbook ever could. ‘We need to realise that a large part of our energy should go towards providing today’s youth with the skills that enable them to be part of the solution, skills such as public speaking, organisation, and interacting with governments’ she says.

‘Education is outdated and not harnessing the skills needed to anticipate the problems we need to solve. Stop teaching people, start engaging them.’

Melati’s new purpose is clear: to introduce a more people-centred and impact-oriented system that will eventually become the ‘go-to HQ’ for other aspiring activists unsure of where to begin. The hope moving forward is that those involved – no matter the cause they’re supporting – will ultimately be able to voice their concerns and suggest practical solutions to those in power.

‘We will only achieve change if we work together intergenerationally,’ she says.

‘Young people don’t get out of bed, skip school, join protests, and create campaigns because we want to be inspirational. We want to be taken seriously, to be included in the entirety of the decision-making process rather than the celebratory stage, to be there from the get-go, to follow the journey all the way to implementation. No more excuses, we’re not waiting for permission, for regulation, we are serious about change.’

Whenever her generation encounters a problem, Melati highlights that it isn’t viewed as a burden, but an opportunity.

This is why YOUTHTOPIA is setting out to connect, incentivise, and foster the changemaking abilities of every young person possible.

Aptly, Serious About Change is the slogan of YOUTHTOPIA, intended to remind the world that the role of young people is not solely to start the conversation, but to accelerate change to the point it actually happens. ‘Change is the only constant factor in our lives,’ she finishes. ‘It’s up to us how we embrace it.’ Ann Makosinski is innovative, entrepreneurial, and eager to build a better planet – all traits of a multitalented Gen Zer who’s striving to prove that science and art go hand in hand.  Canadian inventor Ann Makosinski had something of an unusual childhood. Daughter of a father born in Poland during WW2 and mother from a tiny town in the Philippines, she recalls their parenting style as ‘unique,’ guided by a shared...