A new study has labelled the viewing of diverse figures on the internet as an effective ‘micro-intervention’ for self-esteem that prevents or limits the adverse impacts of social media.

For decades, body positivity has lived comfortably in mainstream media.

Acting as a remedy to idealistic, unattainable beauty standards we’ve long been pressured into accepting, it’s often praised as a force for good. For those whose appearance sits outside the range of ‘socially acceptable’, body positivity helps to readjust ideas of normal.

In 2023, however, as comparison culture persists online and new ‘aesthetics’ spearheaded by skinny white girls flood our feeds, it’s still easy to feel negatively about the way we look.

Unfortunately, our social media habits do little to alleviate this.

Last year alone, the average person spent nearly two and a half hours scrolling every single day, with 4.7 billion people across the globe now using platforms like TikTok, Instagram, and YouTube. 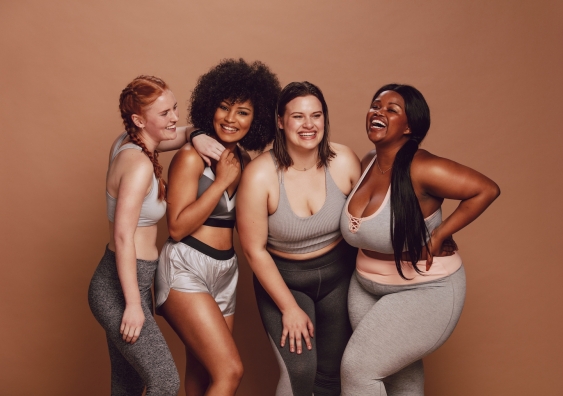 If you’re an avid user yourself, you’ll likely know just how draining this amount of repeated exposure to ‘perfection’ (conscious or not) can be, particularly in the context of self-image.

But it isn’t all bad. This is according to a new study conducted by UNSW Sydney, which has found that seeing just one body positive post a day works wonders for how we perceive ourselves.

Labelling the viewing of diverse shapes, sizes, ethnicities, and disabilities on the internet as an effective ‘micro-intervention’ that prevents or limits the adverse impacts of social media, it confirms that content celebrating every figure can indeed improve body satisfaction in young women.

To reach this conclusion, researchers had the 159 female participants (aged 18 to 24) either join ‘body positive’ and ‘appearance neutral’ Facebook groups, or keep using the site as normal. Those exposed to small bouts of diversity reported decreased tendencies to compare themselves to others and a healthier relationship with their appearance, improvements they successfully maintained for four weeks afterwards.

‘We see this strategy as a micro-intervention – a small change we can make to improve people’s experiences on social media and how they feel about themselves in everyday life,’ says lead author Dr Jasmine Fardouly.

‘In the current study, just one post a day was potentially enough to induce positive effects. More exposure may be even more effective.’

Though joining a few Facebook groups won’t fix the insecurities that life online continues to exacerbate and while we wait for Lizzo’s recent petition to have body-shamers pay for each damaging comment they leave to come to fruition, curating what we see on our timelines so that they become a more uplifting place certainly seems like a step in the right direction.

‘Being unhappy with your body is a risk factor for many mental health disorders. It’s an important predictor of eating disorders and depression and is also linked to some anxiety disorders,’ adds Dr Fardouly.

‘It’s very unrealistic to expect that adolescents will stop using social media altogether, so it’s not an effective long-term strategy. Social media isn’t going away. But as we’ve shown, it’s also not really the time you spend on it, it’s what you’re doing when you’re on it.’