As of this month, imported ‘ordinary cosmetics’ will no longer be required to test on animals in order to be sold in the Chinese market, which is the second-largest in the world.

In a landmark move, the Chinese government has just revised its cosmetics regulations, waiving mandatory animal testing for all imported and locally manufactured ‘ordinary cosmetics.’

This essentially means that any products without an active claim such as ‘anti-ageing’ (from shampoo and body wash, to perfume and makeup) will be exempt from a harmful practice that rights activists have been fighting to eradicate for decades, with China being one of the biggest culprits.

The decision has been long-awaited, as brands striving to be cruelty-free – whether because of their own ethics or pressure from socially-conscious consumers – have had to forego a substantial percentage of the global market.

Until now, these companies have been required by law to pay for third-party animal testing in China if they don’t do it themselves (besides those sold through cross-border e-commerce channels), restricting many big industry names from importing products directly.

According to Statista, China’s cosmetics market is growing at such a rapid pace that retail trade revenue is forecasted to surpass £75bn by 2023. 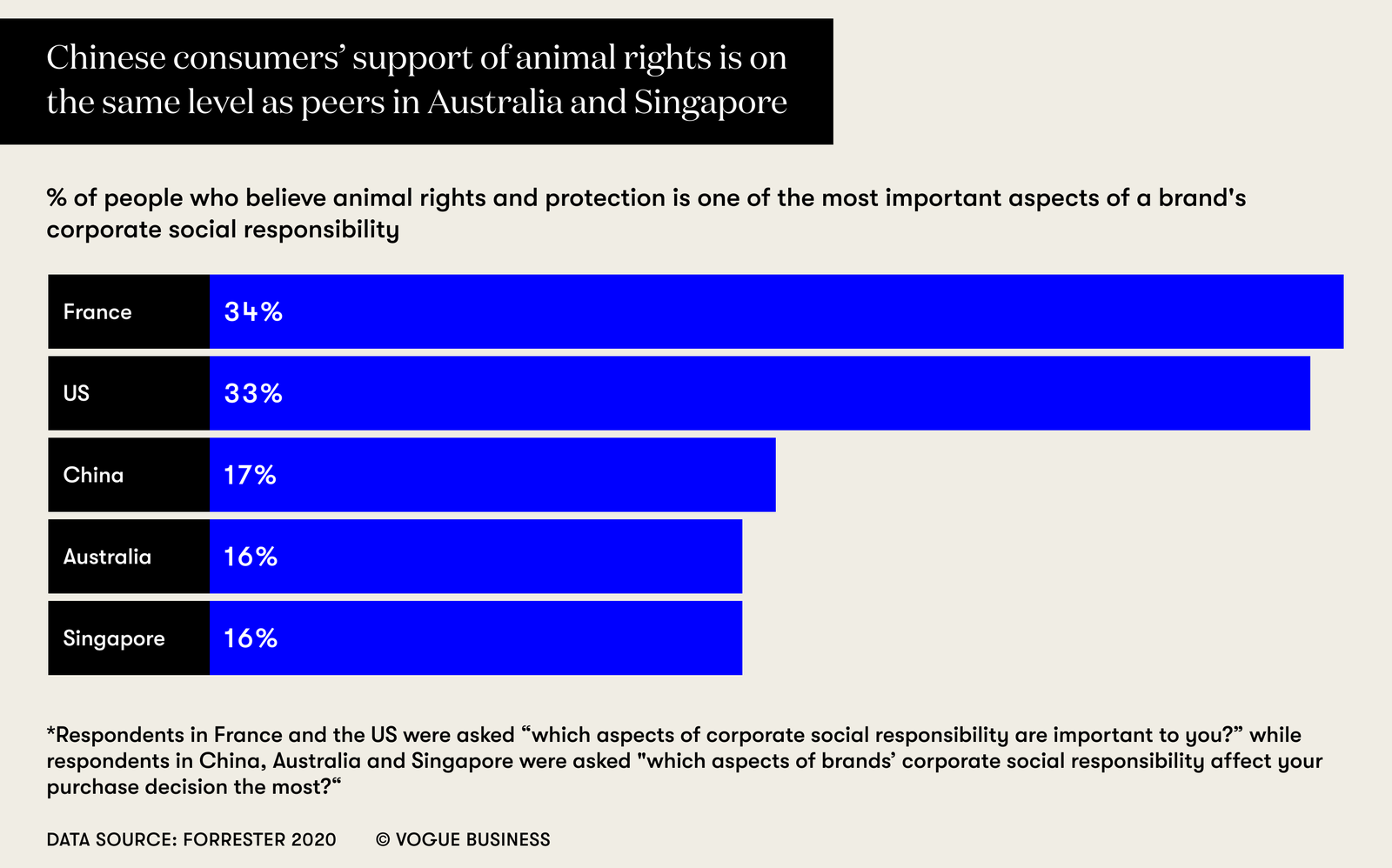 This is a pretty significant shift if you also consider that the market is the world’s largest second only to the US.

‘At this stage, this does not automatically mean that brands can import to China overnight and be cruelty-free, but we are delighted that through co-operation and partnership our aim to end cosmetics animal testing everywhere and forever is coming closer,’ cruelty-free international chief executive, Michelle Thaw explained in a statement.

‘We hope that this will pave the way to actual legislative change that will benefit cruelty-free companies and the Chinese consumer as well as many thousands of animals.’ First announced in March via a notice posted on the National Medical Products Administration website, the ban forms part of China’s wider launch of its Cosmetic Supervision and Administration Regulation (CSAR).

It’ll ask foreign brands to provide proof of ‘good manufacturing procedures’ and pass a safety assessment before allowing them to sell, but they’re still prohibited from using new ingredients in the early stages of testing.

This series of hoops that brands need to jump through in order to qualify for an exemption, alongside the fact that products classified as ‘special’ aren’t included is reason to stay sceptical, however. After all, the newly-relaxed regulations don’t mark the official end of this practice in China as the RSPCA rightly points out.

‘We believe there’s absolutely no justification for causing animals to suffer for testing cosmetics, and consumers across the globe have shown that they feel the same,’ says head of the organisation’s science department, Dr Penny Hawkins.

‘Whilst we of course welcome this step forward for China, globally we still have a long way to go before we see our ultimate aim realised of all animal experiments being replaced with humane alternatives.’

But it’s certainly a start, a signal that Chinese authorities are increasingly viewing animal welfare as an important part of the country’s development.

For cruelty-free advocates, it’s not the end of the road, more a milestone in our global effort to terminate the practice and an indication of a potential future free of animal testing.

In the meantime, consumers can continue to consult PETA’s Beauty Without Bunnies database, which lists more than 5,200 cruelty-free companies and brands that don’t test on animals anywhere in the world for any reason.

Check it out here. Wigs are booming despite a steep ethical price tag Mexico’s ministry of culture has claimed that Zara, Anthropologie, and Patowl wrongfully made use of designs created by the country’s indigenous communities. A number of fast fashion retailers – namely Zara, Anthropologie, and Patowl – have come under fire lately for using patterns distinctive to Mexico’s indigenous Mixteca population in the south-western state of Oaxaca. Accused of cultural appropriation by Alejandra Frausto (the country’s culture minister), these brands have reportedly... Wigs are booming despite a steep ethical price tag

The desire for authentic human hair wigs is growing rapidly thanks to pop culture, but the flashing lights of the red carpet are blinding consumers to the dark secrets of the hair trade. Outside of the Black community, wig-wearing among white women was almost exclusively reserved for fancy dress parties, religious practices, or as a solution for hair loss. Wigs previously held connotations of beauty deception, masking your identity, or false... Is bio-engineered fashion a future solution for ocean microplastics?

Scientists and fashion designers are working together to create clothing using food and drink, meaning plant-based alternatives to environmentally damaging fabrics could be coming very soon. Clothing made from synthetic materials currently dominate the fashion consumer market, with over 60% of clothing produced being made from plastics rather than organic materials like cotton and wool. You’re probably familiar with the textiles polyester, nylon, acrylic, and polyamide - which are... There is no shortage of Black owned brands within the beauty industry. However, funding for these businesses is severely lacking. Glossier is supporting Black entrepreneurs at the pre-launch, start-up, and growth stages of their beauty business venture. Last summer, the rapid resurgence of the Black Lives Matter movement prompted companies to re-assess the value system and level of racial diversity within their practices. Most of us watched from our Instagram timelines...