I spoke with the 18-year-old next-generation leader about her tireless work to achieve meaningful change in a world where all young people deserve the opportunity to be healthy.

Long before Marcus Rashford brought the UK’s child hunger crisis to global attention, with his open letter to Boris Johnson challenging the government’s deprivation of free school meals to 1.2 million youth, Christina Adane was championing the fight against injustice within the nation’s food systems.

‘The fact we’re one of the richest economies in the world and young people don’t have access to at least one nutritious meal a day is frankly appalling,’ says the 18-year-old trailblazer, who tells me that witnessing such discrimination first-hand throughout her own education in south London fostered a deep sense of frustration towards the problem.

This became the catalyst for her activism, which has seen her included in the BBC’s list of 2020’s 100 most inspiring and influential women and receive the Diana Legacy Award, an accolade celebrating the achievements of international teenage visionaries.

Deservedly so, I might add, given how immediately evident her passion for and dedication to the cause is the moment we begin our conversation on Zoom. Barely an adult, she demonstrates maturity and selflessness well beyond her years.

‘I think youth is my power, and being so young, that’s what shocks people into listening,’ she says. ‘I was 15 when I embarked upon this journey, having grown up surrounded by shame for being a low-income student.’ 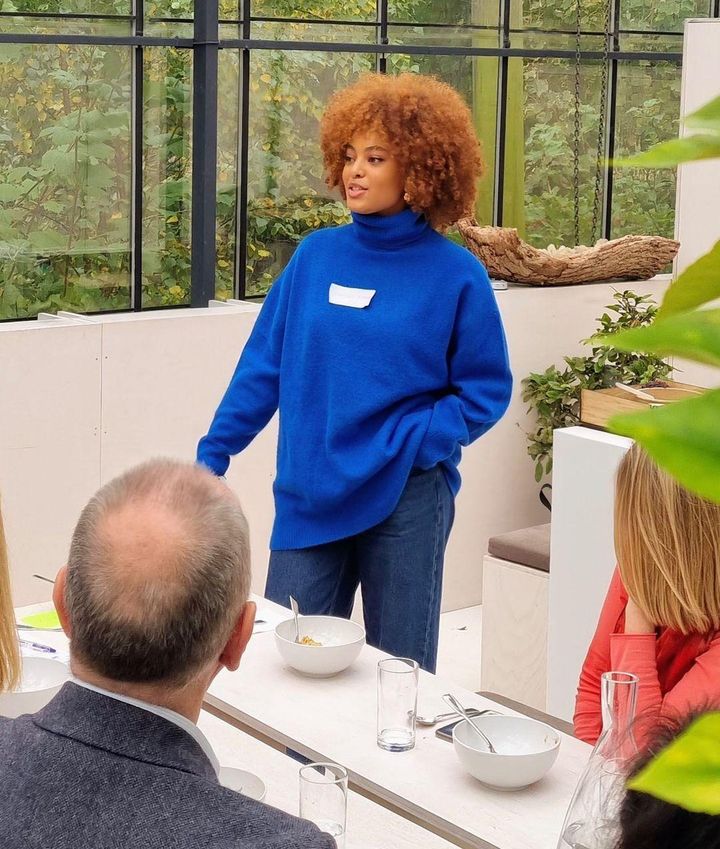 Referring here to her personal experiences with the free school meal programme, Christina explains that despite sharing a similar background to her peers, a substantial amount of stigma was still firmly attached to what is fundamentally a basic human right.

‘I’ve not shied away from being poor, but I never really felt like I was working class until it came to lunchtime,’ she adds. ‘You have the same resources, the same teacher, but it’s always the food that separates you.’

This recognition, paired with the circumstances of her childhood and the light they shone on an inherently broken system, drove her to start a petition.

A petition that garnered almost half a million signatures and laid the groundwork for the government’s dramatic last-minute U-turn to continue providing struggling families with vouchers during lockdown.

‘I was enraged,’ she says. ‘It was not the time to pull back the single most necessary provision for young people to ensure they had food in their bellies.’ Without Christina’s intervention, such repercussions would have worsened amid the economic upheaval caused by Covid-19, far worse than recent findings currently suggest (a survey of 6,490 UK households revealed a 27% higher level of food insecurity than pre-pandemic).

‘People love to overcomplicate the issue when the baseline is that every young person deserves and has the right to be healthy,’ she says, adding that the fight for food equality sometimes feels like a silent one.

‘The topic isn’t ‘sexy’. It can’t be tokenised and it’s not as loud as racism or the climate emergency because it’s a gradual thing. It’s creeping illnesses and diseases that happen over time because we’ve been robbed of our right to health from a very, very young age.’

Her efforts don’t stop there, however. Realising that she’d been living in a food desert, whereby people have limited access to a healthy diet and are consequently more at risk of conditions like diabetes, Christina made it her mission to raise awareness about this and the impact it has on minority groups in particular.

Joining forces with Bite Back in 2019, they’ve been working to tackle the hidden issue of child obesity in the UK ever since. One of the greatest challenges the nation faces according to its Department of Health and Social Care, one in three children are reported to be leaving primary school overweight, making the UK Europe’s child obesity capital. ‘People give so much attention to malnutrition when its antithesis is equally as damaging,’ she says. ‘For the whole time I’ve lived here I didn’t know I lived in a food desert nor that because of this I’m twice as likely to develop obesity and die ten years younger than people in more affluent areas.’

With this in mind, the co-chair of Bite Back’s Youth Board has tirelessly advocated for an improved focus on nutrition, stressing that it’s not enough to provide free meals if they’re unhealthy because this ‘reinforces the status quo that low-income children should have low-quality food.’

This belief led to her instrumental involvement with the charity’s successful campaign encouraging the introduction of a 9pm watershed on the incessant stream of advertisements (15 billion annually to be exact) pushing products high in fat, sugar, and salt – alongside a total online ban from this April – as well as its #DontHideWhatsInside campaign.

In light of new research exposing how big food businesses are manipulating young people into believing their products are healthy, the latter seeks to put an end this kind of damaging marketing.

‘Young people are being misled by a lack of transparency and honesty around what’s really in foods,’ says Christina, explaining that it’s difficult for them to eat healthy because even if something is packaged nicely and presented as being nutritious, it’s often just as high in harmful ingredients as what would typically be considered ‘bad’ for them. ‘While over 70% of those surveyed claim to be choosing healthy options, only 6% actually have a healthy diet according to government standards.’

Christina’s personal take on confronting this is an interesting one. When asked of her opinion regarding an education reform she tells me that it isn’t so much about lessons that hammer in the logistics, more about teaching children to truly appreciate food in their early stages.

‘We need to get young people involved in the journey of it from growth to production to plate,’ she says. ‘Naturally, that’s when they’ll start caring about how globalisation effects our homogenous diets.’

With food systems intrinsically linked to the climate crisis (as, is clear, are numerous factors), this same notion can be applied to inciting dialogue among today’s youth on the importance of pushing for eco-friendly consumption habits to nourish humanity without destroying the planet.

‘My stance on things is that it should be a top-down change inspired by relentless voices at the forefront of what’s irrefutably a systemic issue,’ says Christina. ‘If we want to see genuine environmental action, we have to address the broken food system because it’s the intersect between the climate and health emergencies. Reviewing the completely unsustainable framework we have in place at present caters to both our wellbeing and the Earth’s.’

This profound understanding of food poverty’s multiple facets is what makes Christina a force to be reckoned with and though her activism isn’t without its strains, her fervour is what keeps her going.

By telling her story, Christina has already made great strides towards a world where all young people have the opportunity to be healthy, putting her on the map as one of Gen Z’s most powerful female changemakers.

‘Never compromise on yourself or your beliefs, no woman has ever made a change by blending in with the crowd,’ she says, leaving us with a final piece of sage advice.

‘Don’t be afraid to be vulnerable, have confidence in your own voice, prioritise the message and the aim, and never feel like you’re not doing enough – you’re speaking about it because you have something important to say and you want to make a change, that matters.’