The controversial bill outlaws any promotion of ‘non-traditional sexual relations,’ representing a toughening of an existing 2013 legislation which makes providing information about homosexuality to children a criminal offence.

On Thursday, Russia’s parliament approved by 397 votes to none a bill that makes any expression of an LGBTQ+ lifestyle almost impossible.

Though it still has yet to pass in the upper house and be signed off by President Putin, this is largely seen as an administrative step which makes the proposal a tangible reality.

Representing a toughening of the notorious existing 2013 legislation which regards providing information about homosexuality – in film, online, advertising, or in public – to children a criminal offence, the ban against promoting so-called ‘gay propaganda’ will now be extended to all adults.

The move is part of the country’s broader battle over civilisational beliefs with the West.

It’s the latest in a series of measures aiming to highlight ‘traditional’ family values, as Moscow pushes for increased conservativism amid the war in Ukraine that exceeded the nine-month mark last week.

Any individuals convicted of rejecting this and encouraging the opposite will face large fines of up to 400,000 roubles (£5,400).

The proposed expansion of Russia’s ban on information regarding LGBTQI+ issues would be another serious blow to freedom of expression and the human rights of LGBTQI+ persons in Russia. We urge Russian lawmakers to withdraw the bill and respect the human rights and dignity of all.

Additionally, it’s stipulated that organisations will have to pay 5 million (£68,000), while foreigners could face up to 15 days’ arrest and expulsion from Russia.

Another element of the extensions prohibits information which might ‘cause minors to desire to change their sex,’ deeming it legally in tangent with distributing pornography and violent content.

It also forbids the ‘propaganda of paedophilia,’ which the government often conflates with being gay.

Under the new proposal, any such material will be legally considered the same as stoking racial, ethnic, and religious tensions. In response to this experts have warned that the vagueness of the bill’s language gives room for law enforcers to interpret them as broadly as they wish, leaving members of the LGBTQ+ community in a state of even greater uncertainty.

‘Any propaganda of non-traditional relationships will have consequences,’ the speaker of the lower house, or State Duma, Vyacheslav Volodin, said on social media. 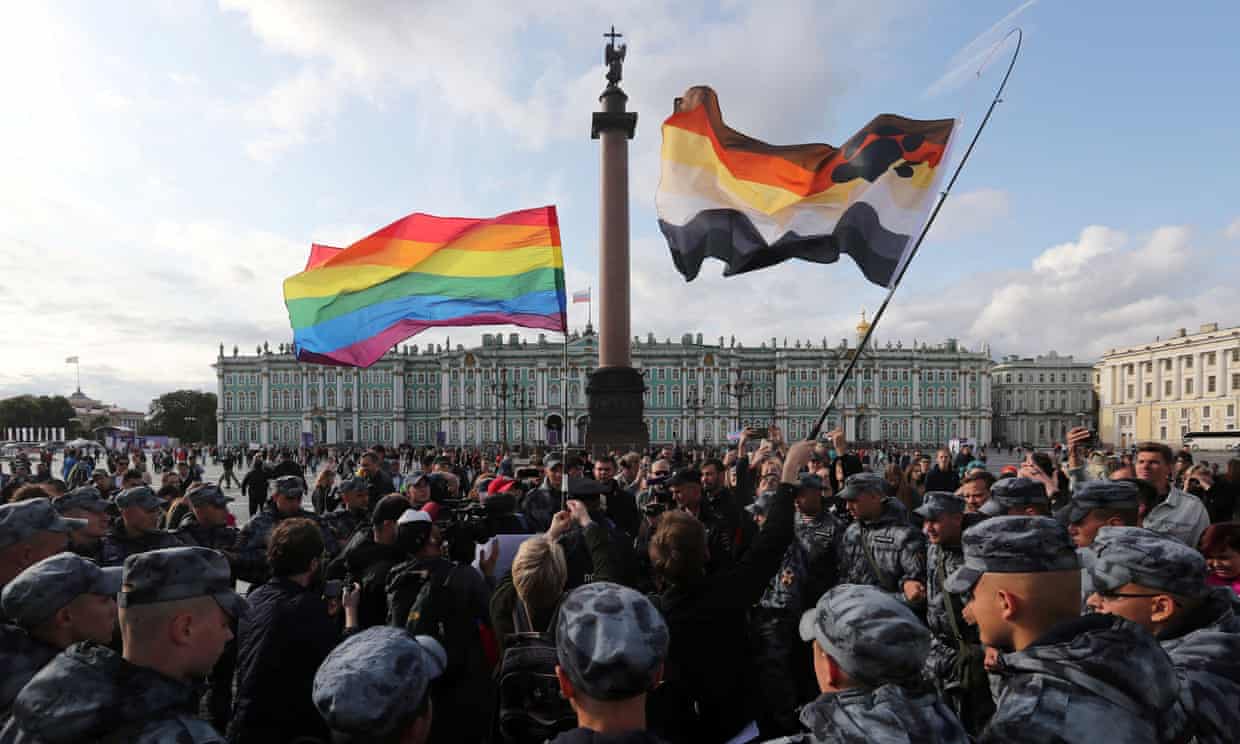 ‘The bill will protect our children and the future of our country from the darkness spread by the US and European states. It is a reaction to a change in approaches to the modern understanding of family, gender, the basics of childbearing, aimed at maintaining the current law and order in the Russian Federation.’

Stressing that this is evidently intended to drive those leading ‘non-traditional’ lives out of public life altogether, activists and human rights groups have condemned the law, citing additional fears that it will be used to make the topic of gay sexual orientation essentially taboo in Russia.

What’s more, they say that same-sex couples will begin to fear their children might be taken away from them on the grounds they were having a so-called LGBT lifestyle demonstrated to them.

‘This law is part of an ongoing homophobic government campaign against LGBTQ rights,’ says the head of Russian LGBT Network, Igor Kochetkov, who worries the bill is also an attempt by the Kremlin to look for internal enemies and distract attention from battlefield losses.

‘This is part of a broader attack on anything the government deems ‘western and progressive.’

Like many, Kochetkov’s organisation is determined to continue fighting for the rights of minorities – even as the space for expression closes.