The country is bracing for further unrest as citizens protesting a proposed tax overhaul tied to the pandemic face unnecessary violence at the hands of law enforcement officials.

Intended to fill a pandemic-related fiscal hole and mitigate the country’s economic crisis, the now shelved reform would have lowered the threshold at which individual salaries are taxed, affecting anyone with a monthly income of 650+ USD.

It would also reduce health and education budgets yet leaving the military’s intact.

Perhaps most problematic of all, however, is that VAT was to be applied to previously tax-free food staples like coffee, milk and eggs, as well as pharmaceuticals and sanitary products. 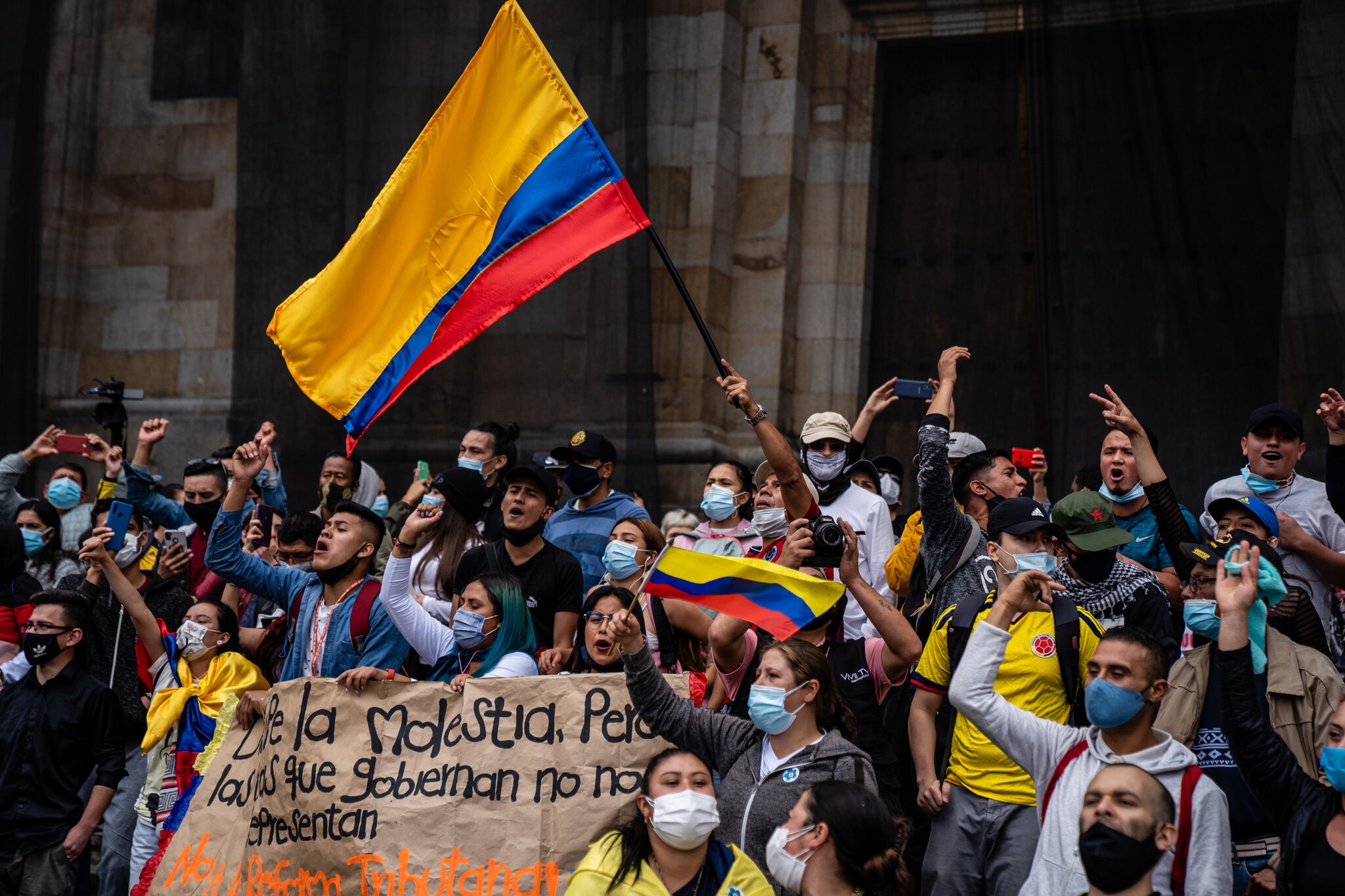 While Colombia has been confronted with profound transformations and challenges in recent years that its government is seeking to tackle – from expanding demographics and the influx of almost two million Venezuelans to post-conflict financing and a rise in new criminal organisations – 42.5% of the population is now classified as poor, one of the devastating repercussions of Covid-19 in the country.

Another evidently being the fact that coronavirus has, to date, claimed over 75,000 lives with the latest daily fatalities breaking Colombia’s own records.

Amid a ruthless third wave, the strikes are underscoring the destabilising impact of this.

A bill of this nature would, as a result, financially cripple the already struggling general public. It’s for this reason that so many have taken to the streets in opposition. Morphing into a national outcry over rising poverty, unemployment, and inequality, the largely peaceful demonstrations have since been met with a significantly violent police reaction and Colombia is now bracing for further unrest.

‘This is one of those moments where a key break in society is happening,’ urges director of Colombia Risk Analysis, Sergio Guzmán. ‘And people are fed up and waking up to the power of the streets.’

So far, at least 800 people have been injured and 19 killed, more than 400 arrested for ‘vandalism’ with countless others reported as missing – but these figures are thought to be considerably higher.

Videos circulating on social media show scenes reminiscent of a war zone with police deploying tear gas, firing at protestors from point-blank range, bashing them with shields or clubs, and charging at crowds with motorcycles.

‘It’s like the police are waiting for night to fall so they can roll up and start shooting indiscriminately,’ said one community leader in a poor Cali neighbourhood that’s been repeatedly raided by riot squads. ‘Bodies are going to pile up, the dead on top of the dead.’

The dead include 17-year-old aspiring artist Nicolás Guerrero who was shot in the head on Saturday as cameras rolled. Footage of the tragic incident has been shared innumerable times online, prompting the United Nation’s human rights office (OHCHR) to express its concern. ‘We are deeply alarmed at developments in Cali overnight, where police opened fire on demonstrators, and a number of people were killed and injured,’ said a spokesperson. ‘We express our profound shock at the events there and stress our solidarity with those who have lost their lives.’

Unfortunately, brutality at the hands of law enforcement officials isn’t anything new in Colombia and this violence is part of a wider, extremely disturbing pattern that shows no signs of abating. 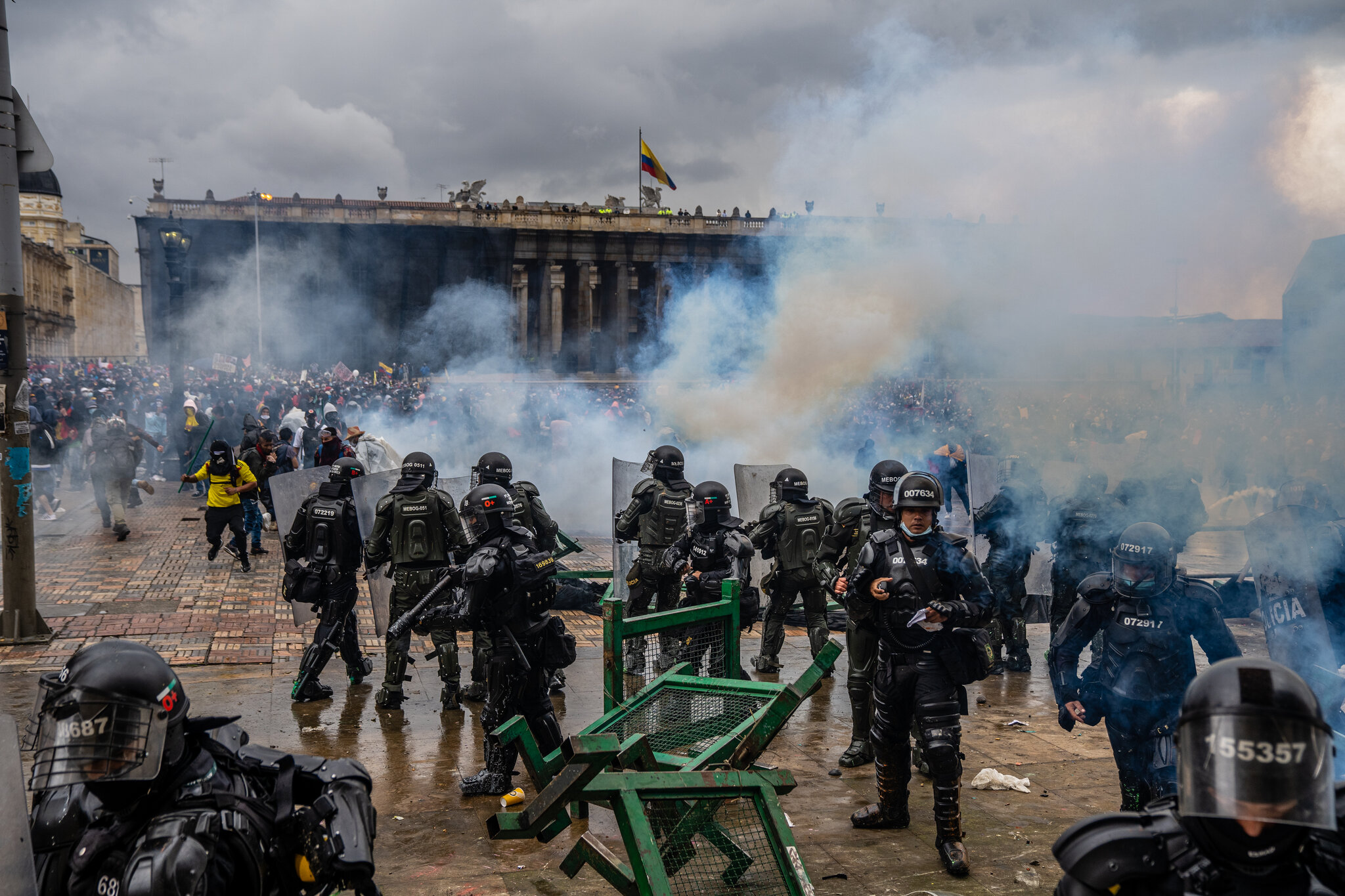 Long-recognised as a nation plagued by corruption and institutional injustice, the pandemic has simply added fuel to the fire, leading to a harrowing influx of power abuses by police who view the current situation as an excuse to crack down twice as hard.

With their militarisation quickly gathering momentum on the back of this, they have begun operating more like armed forces.

This, of course, heavily undermines human rights and has become the primary driver of the continued mass-mobilisations.

According to several NGOs, Colombia’s police regularly fail to uphold international standards of human rights, which state that ‘restraint should be exercised in the use of force and damage and injury are to be minimised.’ 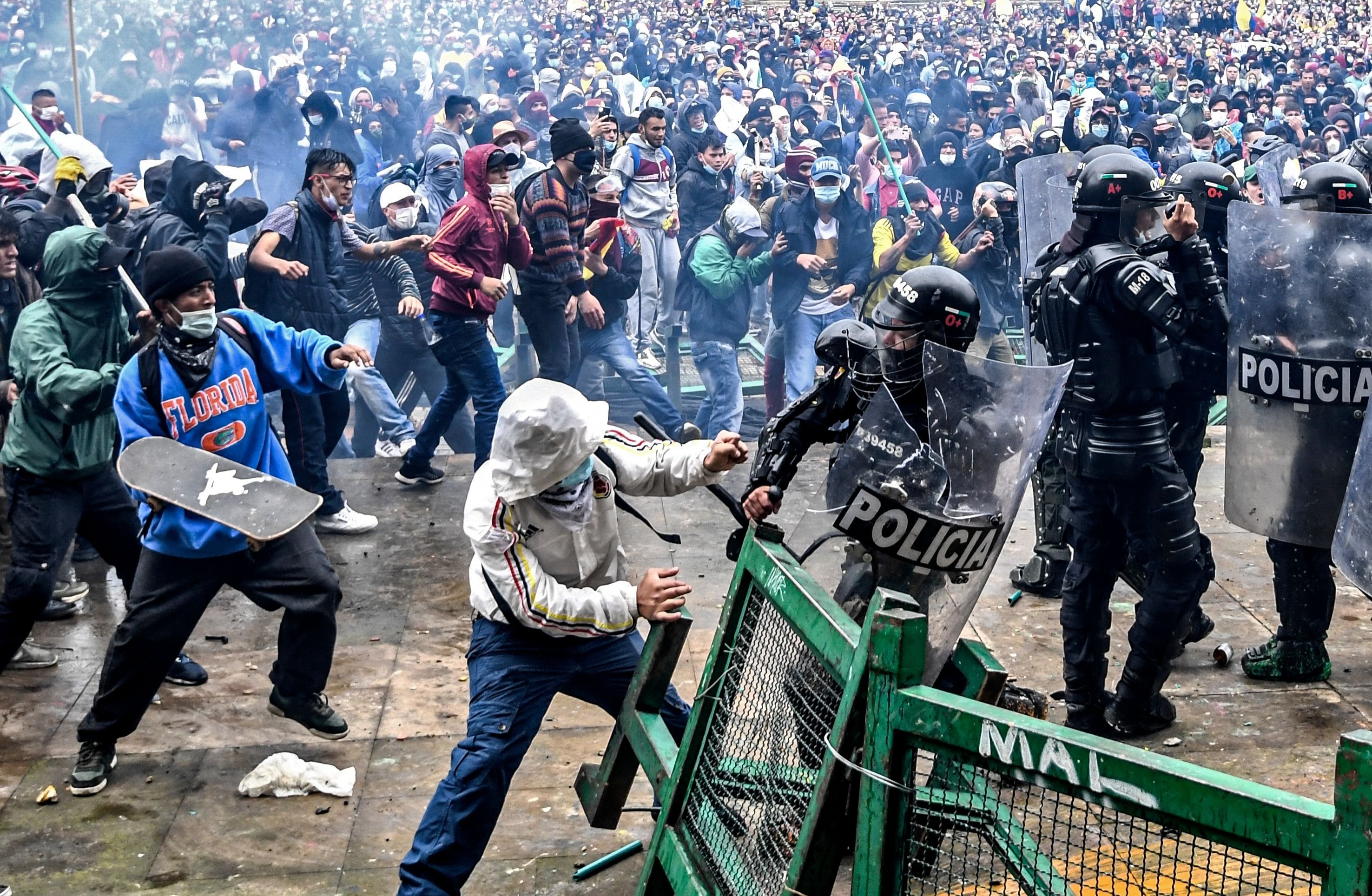 This was made clear in January, when a report uncovered that Colombia’s police have been responsible for 289 homicides committed between 2017 and 2019, for which only two policemen have been convicted.

Though right-wing President Duque accepted the registration of his finance minister earlier this week and has ordered Congress to remove the ‘Reforma Tributaria’ to instead draft a new proposal based on ‘political consensus’  (following unrelenting pressure from the hundreds of thousands persisting with the strike), anger towards his deeply polarising government prevails.

Duque’s concession has done little to quell their frustration, calling the reform a ‘necessity’ not a ‘whim.’ But regardless of the U-turn, this popular discontent is about the way his government has run the country for two and a half years and those marching are demanding much more than the axing of the overhaul.

‘People are going hungry. It’s not just the tax reform, it’s about the health services and the policies of the government,’ says voluntary human rights observer, Ana Maria Burgos. ‘That’s the problem. People are tired, and they’re saying, “no more”.’ 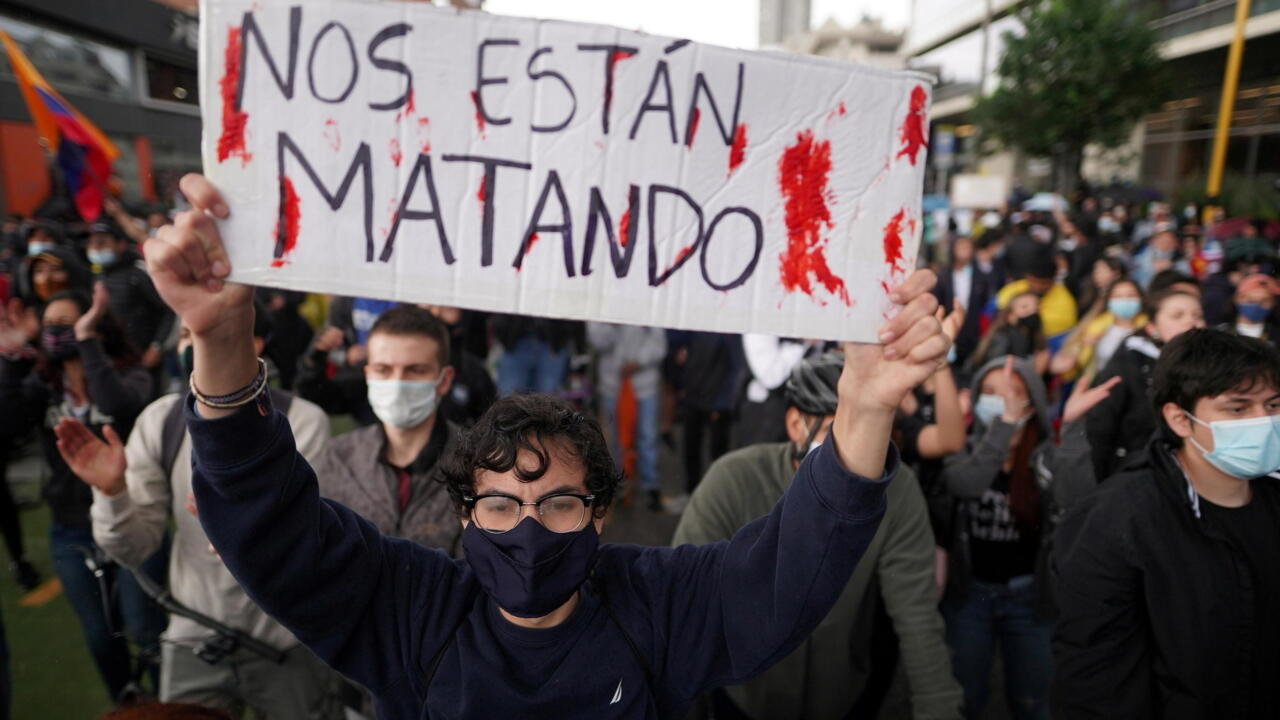 Disturbingly, the scope of the ongoing protests is difficult to gauge.

If they receive the kind of broad-based support seen in September 2020, analysts warn they could continue for days, weeks, or even longer.

‘They may have guns, but they can’t kill us all,’ Gabriela Gutierrez told The Guardian on Monday, one of a group of students who set up a roadblock in downtown Bogotá.

‘Colombia needs change and we’ll be on the streets until we get it.’

Here’s an ongoing list of resources, campaigns, petitions to sign, and organisations to follow. Alternatively, you can donate to Red Condors: Urgent Help For Activists in Colombia, Support Protesters in Cali, Feeding the Revolution (Alimentando la Revolución), and Help Colombia Stop Police Brutality.