The internet may have done wonders for the mental health conversation, offering anyone struggling a space to feel heard, understood, and supported, but with sadfishing on the rise, is there a limit to how much we should be disclosing online?

While I’ve always been one for the occasional #ootd on Instagram, a retweet of something I relate to, or a TikTok video of aesthetic moments I’ve compiled throughout my week, I’ll admit I’ve never really understood the appeal of disclosing my personal struggles to the online world.

Don’t get me wrong, however, because despite my trepidations – largely stemming from fear of judgement – there’s no denying that from sitting on the side-lines alone, I’ve experienced the sense of community provided by social media that entices people into opening up the way they do.

During the last decade, the internet has done wonders for the mental health conversation, offering anyone suffering from trauma, anxiety, loneliness, depression, and existentialism (among many others) a space to feel heard, understood, and supported.

It’s challenged deep-rooted societal stigma associated with these conditions, given us access to help we didn’t know we needed, and has shown us, perhaps most importantly of all, that we aren’t isolated in our fight for happiness.

Finding comfort and solace this way (as Bella Hadid famously did in November with a raw insight into her battle with guilt) is particularly beneficial, I might add, in the aftermath of a pandemic that’s left primarily young people vulnerable to the highest levels of psychological distress since WWII. 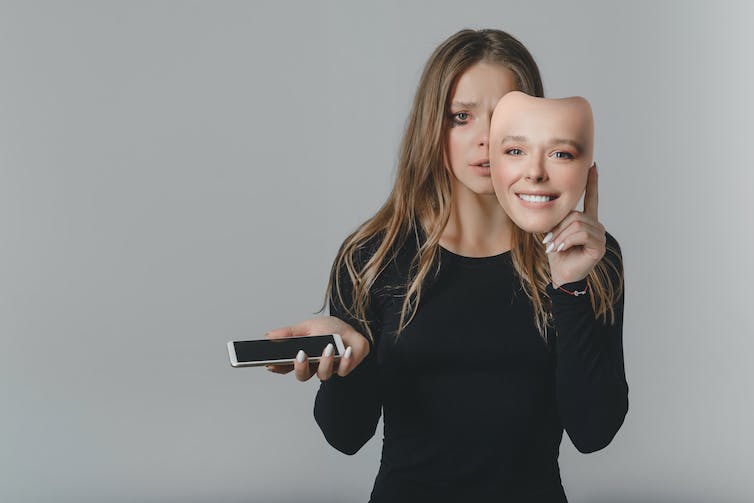 In fact, posting captions that detail our issues aside, discussions regarding what we’re facing were being encouraged long before people even started seeking therapy.

After all, ‘a problem shared is a problem halved’ as the saying goes.

And doing this through a screen does have its appeal in that its unquestionably easier to condense our woes into 280 neat little characters than it is to pick up the phone and call someone to express those emotions out loud.

‘There’s that sense of removal on social media; there’s a sense of distance because you’re not directly speaking to individual people in the same way. It’s like the screen acts as a barrier,’ explains journalist, Sian, who adds that being able to vent online is instrumental for those without access to an alternative outlet. ‘You feel less like you’re burdening people because you just send the tweet.’

Unfortunately, as with most good things, a dark side to this otherwise healthy coping mechanism has reared its head in recent years. 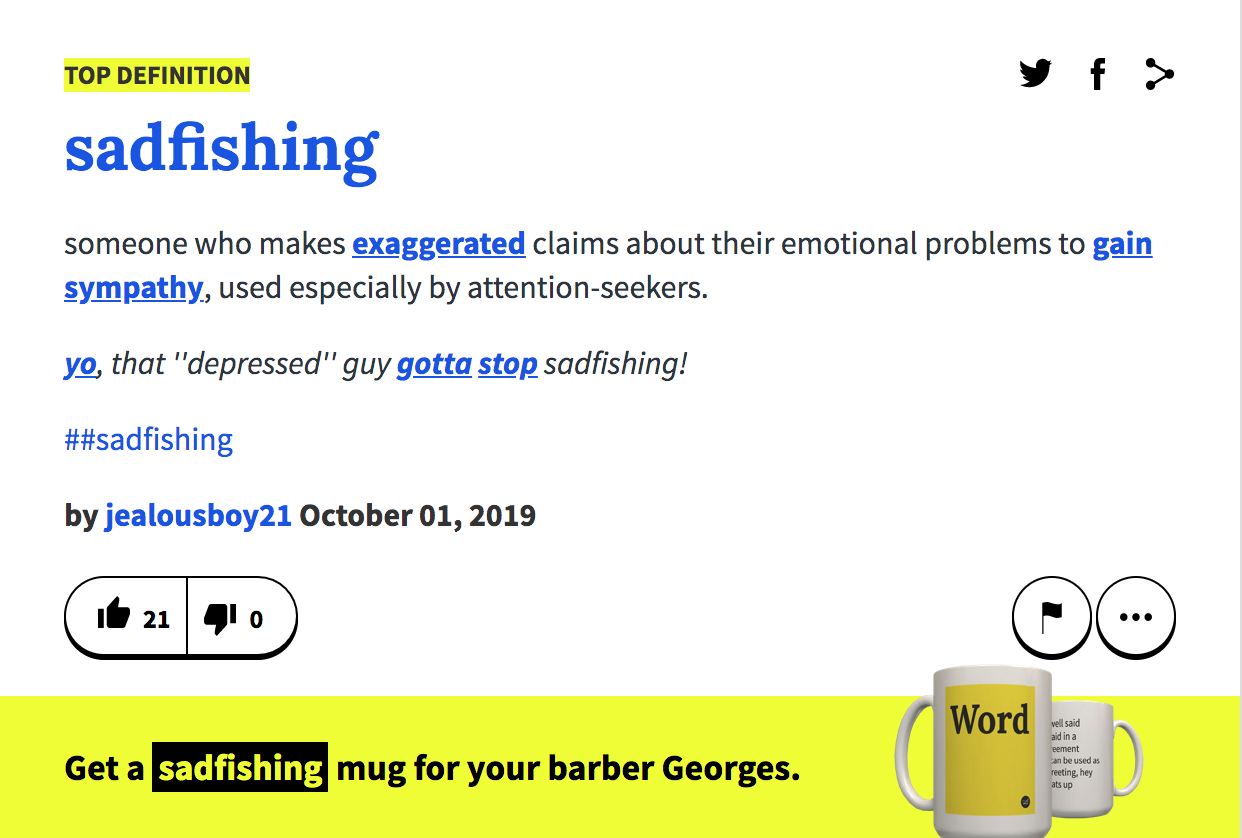 And I’m not talking about the evidence-based irony of our digital habits being a major contributor to the negative facets of our wellbeing, those we’ve been so eager to vocalise on our favourite platforms, but the fact that being sad on socials has become trendy.

‘Why do people commodify their trauma for clout/pity points/monetary benefits while posting themselves as victims incapable of harming others because of their prior experiences?’ asks a Reddit user, referring to the toxic ‘sadfishing’ phenomenon whereby individuals broadcast their problems for attention. Of course, one could argue that spontaneous displays of emotion intended to raise awareness on lives, stories, or our feeds are only viewed as contrived because we’re so used to seeing everything through a perfectly curated window.

Yet it appears as though the line between genuine bids for aid and performative attempts to rack up views has been blurred as of late.

For this reason, an undoubtedly progressive stride towards breaking down the walls that prevent us from learning how to cope has turned into something of concern.

Can we please stop romanticizing anxiety and depression? It’s not trendy, cute or special. Having mental health problems isn’t beautiful and is not something to be a stupid trend on an app called Tik Tok. You don’t fucking want anxiety or depression, they are not QUIRKY traits.. pic.twitter.com/sYAryLkXqs

‘Being vulnerable on the internet can lead to feeling supported, sure, but it would be naïve to gloss over the fact that it can also lead to abuse,’ writes Serena Smith for Dazed.

‘Social media collapses the boundaries between public and private and while online anonymity can help sufferers speak freely about their issues, it can also enable users to ridicule people with no accountability.’

Damaging both because it encourages the ‘memeification’ of mental health – engaging with which has the potential to stimy our recovery – and has led to the bullying of vulnerable children with no ulterior motives behind their transparency, sadfishing is pushing us back to square one.

Namely the time prior to mental health’s democratisation when most of us were forcibly desensitised to it.

Contrastingly, and I say this with memories of my Tumblr days in mind, pursuing a sympathetic digital ear also has the potential to expose us to the misleading glorification of these issues.

Often portrayed as ‘glamorous,’ ‘cool,’ and ‘romantic,’ more and more teenagers are being convinced that eating disorders (to name just one example) make them special.

‘For some people, especially when you’re young, there is a bit of a pull to join a group and the group of people with anxiety or depression feels like one you can easily join.’ says Natasha Tracy, who developed her following by blogging about her severe bipolar disorder.

So, as we continue to navigate the evermore complicated realm of social media alongside the varying degrees of severity to sadfishing online, we ought to define a limit to how much we’re sharing.

In an ideal world, our pleas for catharsis would be met solely with empathy, kindness, and advice, rather than derision, but until then, our venting may well be doing more harm than good.