The influencer’s brand of hyper-toxic masculinity has fostered a cult of violent sexism online. With young men most easily swayed by his disturbing ideologies, Tate’s permanent removal from social media should only be the start of confronting what is a much wider issue.

When I first came across Andrew Tate his ramblings were so outrageous and flagrantly misogynistic that I was certain they were a joke.

It wasn’t long, however, before I started to pick up on the sinister nature of his content, most of which focuses on his brand of hyper-toxic masculinity.

Videos describing women as ‘barely sentient’ and tweets claiming we ‘put [ourselves] in a position to be raped’ made clear that Tate consistently and aggressively creates misogynistic content targeted toward other men.

Yet, despite feeling sick to my stomach when listening to his radical bigotry, it wasn’t his rants that concerned me most; neither was social media’s failure to restrict and limit his influence. 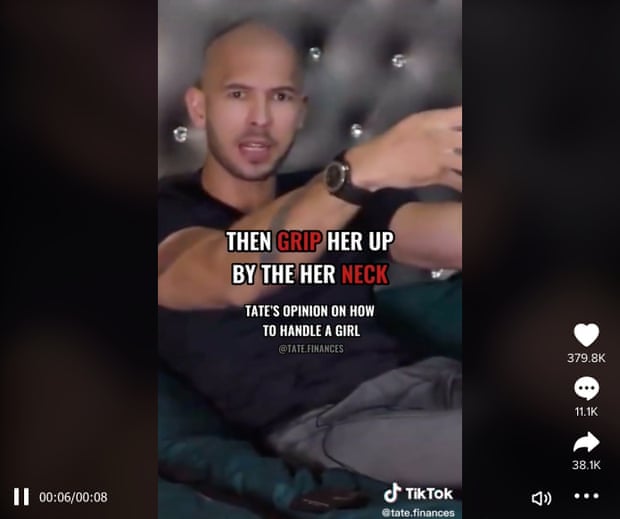 Instead, it was the apparent allure of Tate’s alpha-male persona for a growing cohort of young, impressionable men. Sways of a single demographic are being easily swayed by disturbing ideologies and hanging off his every word.

In light of how recently society appeared to acknowledge the threat posed by the incel movement, surely we wouldn’t provide an opportunistic businessman to adopt and maliciously spread backwards beliefs, would we?

At least, the likes of YouTube, Instagram, and TikTok would, whose moderators neglected to act until a deluge of think-pieces, NGO denunciations, and campaigns to have him removed began to surface.

An effort that finally amounted in Tate’s removal from all mainstream platforms. He is now permanently unable to exert any more power over the public consciousness.

My only fear with this Andrew Tate thing is that it will only make his platform and fanbase stronger. I hope it doesn’t but there’s something about deplatforming ppl that helps them play into the ostracised truthteller trope, leaning on the fact that they’re too real for others

According to sociological researcher, Annie Kelly, there’s a reason this happened at such a snail’s pace.

‘There is an effect on social media in which the most radical, hard-line rhetoric rises to the top because it drives so much engagement,’ she told VICE in an interview about antifeminism and the far right.

‘Plus, the values and behaviours these alphas expound are often really aligned with hustle and bro culture, and then politically as well; often these alpha influencers are very right-wing, outspoken, ‘anti-woke’, and that resonates with a lot of men.’ Now, as much as it pains me to say this, Kelly isn’t wrong.

This surge in rhetoric that Tate has been spurting for significantly longer than he ought to have been isn’t new. It’s a direct reflection of the priorities of our favourite apps. Namely their overruling desire to garner as much traction as possible, whether or not that involves fostering a community reliant on the preachings of people grasping for fame, no matter the cost.

It’s also a nod to how all over the place social media censorship still is.

A prime example of this is the continued suspension of accounts promoting sex positivity or celebrating the female form, all while dangerous personalities spreading their misogyny, racism, and homophobia prevail.

In the case of Tate, with his enterprise solely reliant on interaction (including comments and posts raising awareness about the obviously harmful connotations of his opinions), prevail he did, dominating every corner of the Internet and escaping through its cracks.

We’ve even seen his influence spiral into primary schools, where teachers have been forced to issue stark warnings to prevent students as young as 11 from copying Tate’s behaviour.

if you have a son, a little brother, a nephew, etc y’all need to srsly be monitoring what kinds of content they’re consuming because this is so fucking scary pic.twitter.com/YuJGZ6kFJH

But although the onus did lie largely on the social media companies reluctant to deplatform one of the most ubiquitous – and controversial – faces on our screens, perhaps we should additionally be turning our attention to how someone (who has been questioned on human trafficking and rape allegations) managed to accrue such a substantial audience in the first place.

On this note, should this serve as a lesson to us all that the more we poke the bear, the higher the likelihood is that their presence on our feeds will flourish?

Or is Tate’s sudden popularity among young men illustrative of a wider issue surrounding the impressionability of teenage boys in an era that claims to be progressive?

Whatever the answer, I’m at least grateful that the days of seeing him take deep, ostentatious puffs of cigar smoke between his tirades against women are over.

And hopefully his long overdue departure from the Internet will send a message to anyone seeking to fill his shoes.