The e-commerce giant is launching a digital storefront that will let customers purchase luxury items from high-end independent designers, but concerns have arisen regarding what it means for the future of the industry.

Striving to further solidify its presence in the world of fashion, Amazon has partnered with Vogue and the Council of Fashion Designers of America to launch an online store showcasing independent luxury designers. Although many perceive the merging as coming to the rescue of a beleaguered industry on the verge of losing an entire generation of designers due to the pandemic, some are concerned it instead signals a bleak future for fashion, one where high-end goods are sold alongside cheaper ‘knockoffs’.

Allow me to explain. For the time being, it’s the independent high-end designers finding themselves particularly challenged as lockdown continues, their businesses very negatively impacted by Coronavirus. Even luxury e-tailers like Net-a-Porter have had to close their warehouses.

Launched in order to help these companies stay afloat, Common Threads: Vogue x Amazon Fashion will feature 20 creative names including the likes of Edie Parker, Brock Collection, Batsheva Hay, and 3.1 Phillip Lim, all of whom now have the opportunity to take their work online.

‘I’m thrilled to announce this partnership, and want to thank Amazon Fashion, not only for its generous support of A Common Thread,’ but also for so quickly sharing its resources to aid American designers affected by the pandemic,’ said Anna Wintour. ‘While there isn’t one simple fix for our industry, which has been hit so hard, I believe this is an important step in the right direction.’

Whether they like it or not, what’s apparent is that designers — specifically small, lesser-known ones — don’t really have a choice in the matter. They desperately need somewhere to move their existing inventory and where better than a location with access to an enormous ready-made consumer base and the logistics to successfully complete the transfer overnight?

The idea for the digital storefront itself was actually born out of the Common Threads grant programme that Vogue and the CFDA created last month when working together on how to help the already suffering fashion industry survive the pandemic.

Having already raised over $4 million with the initiative to be paid in small increments to garment manufacturers, retailers, and designers until the point of their reopening, they were in search of what to do next and along came Amazon. Donating half a million dollars to the fund, the e-commerce giant’s involvement has been invaluable and upon asking how else it could contribute, Common Threads: Vogue x Amazon Fashion swiftly came about.

However, despite this forward-thinking move to create an outlet for brands currently at risk of bankruptcy after Coronavirus forced the closure of their brick-and-mortar stores, concerns have arisen that it gives Jeff Bezos (CEO of Amazon and the world’s richest man) a certain level of authority over a community already suspicious of him.

Yes, millions of cancelled orders and towering piles of unsold stock is certainly an issue that needs resolving, but is this partnership simply an easy way out as opposed to a step in the right direction the way Wintour seems to believe? 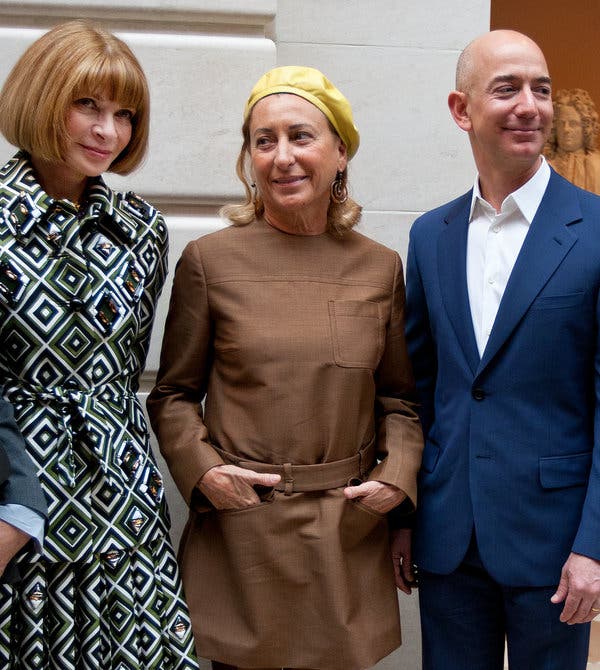 Arguably the largest fashion retailer in the USA, Amazon has — until now — been perceived as more of a threat than a saviour in the eyes of independent designers, a platform providing consumers with access to dupes and goods that feed fashion’s toxic hype obsession. At its core, ‘the everything store’ has never sat quite right with luxury fashion’s ethos, which supports the ownership of few, uniquely special things rather than trend-chasing and mass-production.

Apprehension also derives from the controversies surrounding Amazon’s treatment of warehouse employees, which has quite noticeably affected sales in recent years and the reputations of brands now associated with the e-commerce giant are in danger of being tainted as a result. Not to mention that a great deal of shoppers appreciate the idea of supporting small businesses because of their attractive de facto ‘anti-Amazon’ positioning. Amazon’s shopping environment isn’t necessarily glamorous either and its all of these factors combined that have people up in arms, taking to social media to express their disdain.

I can't stop thinking about this Vogue/Amazon deal. Amazon gets:
1) at least 17% of sales
2) high fashion on the platform, which they've wanted for years
3) Vogue seal of approval

Designers get:
1) exposure to an audience looking for the cheapest deals and free shipping? idk

Essentially, although it’s become common knowledge that fashion will be forever changed on the other side of the pandemic, what’s clear is that this isn’t exactly the transformation that was expected. Amazon’s push to be a major player in the industry is being viewed as Bezos’ way of ‘telling the snobby luxury world that despises him he has more money than them,’ (according to French journalist Pierre M’Pelé) and many are doubtful that people would even be interested in the items to begin with. ‘People want to see at LEAST 100 reviews on $2 + $20 products to feel assured,’ says luxury marketer Shelby Ivey Christie. ‘How do we think consumers will feel buying $500 designer products with 0 reviews?’

Unfortunately, Christie is right. A site dependent on word-of-mouth, it makes sense to assume that Amazon may struggle shifting designer items when they’re available for the same price directly from the highly reputable brand itself. In fact, a recent survey illustrated just this, with less than 8% of participants stating they would be keen to buy luxury from an e-commerce platform.

But it’s too early to tell. Amazon could well be the next-best thing in fashion, a knight in shining armour during an inherently difficult period for the industry, or — and this is more likely given the overwhelming backlash since the partnership’s original announcement — it could easily be its downfall.

It’s no secret that Bezos has been eyeing up the most attractive part of the apparel sector for a while now, and there’s no denying how beneficial it’ll be for fashion while Coronavirus persists, but we’ll have to wait and see if it’s simply ‘the beginning of high fashion’s slide down the slope into Amazon’s waiting arms,’ as The New York Times puts it. TikTok is hosting its own digital fashion month Converse’s All Stars programme is an engine for youth opportunity