From the cancellation of fashion weeks around the world, to brands and designers shutting their doors during lockdown, COVID-19 is taking its toll on fashion.

As the pandemic spreads, so does its impact on various industries. With the most recent run of fashion weeks overshadowed by the rapid increase of COVID-19 cases around the world, the industry has since experienced huge disruptions that are likely to have long-lasting effects.

Major annual events, including the CFDA Awards and the Met Gala have been postponed indefinitely. Brands and design houses have halted production for the time being, and international department stores such as Selfridges, Macy’s, and Nordstrom have closed their doors to the public.

While people continue to test positive for the virus and lockdown persists, Confindustria Moda president Claudio Marenzi rightly predicts that it will be ‘an incredibly tough year for fashion, the repercussions of which we’ll likely see well into 2021.’

Fast fashion companies, particularly those reliant on physical retail like Zara, Mango, and H&M, have found themselves in a difficult position amidst the crisis.

Though more people staying indoors signifies a rise in online shopping – Quantum Metric released data illustrating that internet apparel revenue growth is up 43% from this time last year – it doesn’t automatically mean that retail is thriving.

In fact, the trend-driven nature of fast fashion brands is to blame for the sharp dip in their popularity, as consumers are appropriately choosing to don loungewear over ‘trendy’ pieces inspired by celebrities, influencers and major fashion houses.

Yes, companies such as Nasty Gal and Fashion Nova are attempting to adapt to this change, promoting comfortable apparel for those stuck at home, it’s just not feasible to sell items based on ‘what’s hot’ anymore.

With supply but no demand, brands are better off implementing tactics like personalised promos and banners so that when customers are browsing their attention is drawn to products they may previously have expressed interest in (as opposed to anything new).

This is according to Graham Cooke, CEO of personalisation technology company Qubit, who also explained that ‘people used to buy disposable fashion to look good in the office or for an event, but as their behaviour changes, fast fashion is of course going to take a huge hit. Its success has always been in offering customers a wide variety of styles, fast, so retailers overall should narrow their collections to more basic items that have a longer shelf life and broader appeal.’

However, while the move of these businesses to e-commerce-only does suggest they’ll do well in terms of sales at the moment, it’s inevitable that there’ll be a slow-down in 6-8 weeks when they’re waiting for new shipments to come in due to increasing delays in the supply chain.

And, with The Guardian reporting that an estimated £10bn worth of clothing has piled up in warehouses during lockdown, it’s unsurprising that numerous poorer-performing retailers like Cath Kidston and Debenhams are on the verge of collapse.

Forced to close online trading operations due to difficulties in protecting workers from infection as they pick and package goods, the clothes simply aren’t able to be shifted.
‘It’s a desperate time,’ said a spokesperson from a major high street clothing supplier. ‘People will try to reuse stock next year but they’ll have to slash prices because some styles simply won’t be relevant anymore.’ 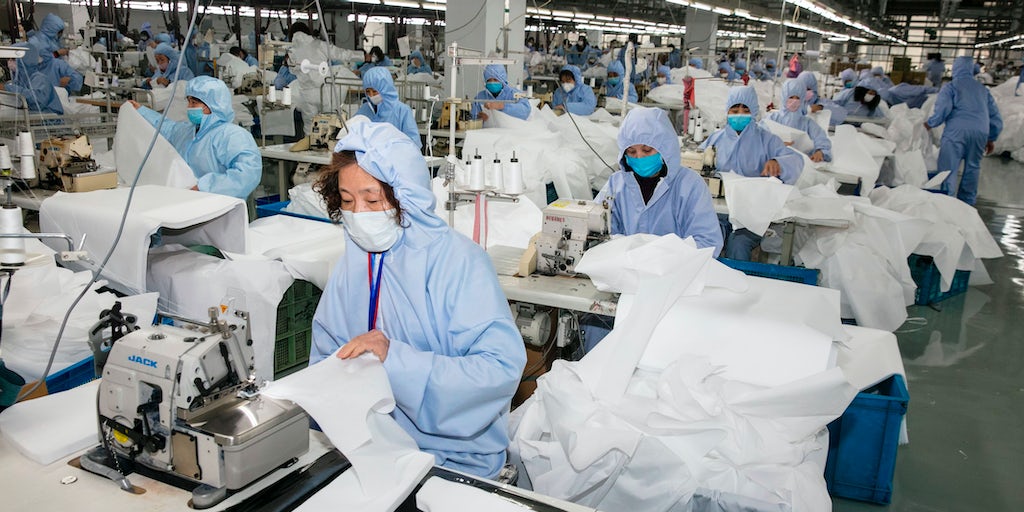 Designer face masks and cancelled shows: fashion in the time of Coronavirus How COVID-19 is affecting the global beauty industry

Essentially, the industry has lost an entire season, which is particularly problematic because it’s how fashion functions at its core. And, besides the mass shut-down of physical retail, when you consider that China is by far the world’s largest textile producer with exports worth more than $280bn a year, designers are struggling to stay afloat too, grappling with refused shipments and weak forward orders.

‘Often in companies, up to 90 per cent of all goods are made in China from oil-derived substances such as plastic and polyester,’ says trend forecaster Li Edelkoort. ‘We will soon see shelves empty of shoes, phones, clothes and even toothpaste. And we already know that the design processes for fall/winter products are not happening as they should be.’

But as bleak as this sounds, it’s not all bad news. In the wake of western luxury brands hastening to strengthen their online presence, small, independent designers are the ones suffering the most without the resources to support themselves or make the jump from brick-and-mortar to e-commerce. As a result, the fashion world has taken note, with Vogue starting a fundraising initiative called A Common Thread to help designers keep their businesses going.

Additionally, in an unexpected move, Italian designer Gorgio Armani wrote an open letter to WWD reiterating his long-term belief in the need for a slowdown in the luxury fashion system. ‘Luxury cannot and must not be fast,’ he said. ‘A careful and intelligent slowdown is the only way out, a road that will finally bring value back to our work, and that will make final customers perceive its true importance and value.’

And he’s right. From the 37% increase in searches for sustainability-related keywords (Lyst) since the beginning of the pandemic, a long-overdue shift in shopping behaviours finally appears to be taking place. Conscious fashion is gaining new meaning for consumers because they have no other choice than to put more emphasis on repairing and re-wearing what they already have – a welcome change in my opinion.

I’m not saying that COVID-19 has been good for fashion because it very clearly hasn’t. Millions of jobs have been lost, employees have been furloughed and the hope of an autumn rebound is relatively futile. However, what’s clear is that with time to reflect, the industry as a whole is coming to terms with the fact that things will be very, very different on the other side of this.

At this time of reflection therefore, while we pause and consider the systems within which we work, why not think of fashion’s out-of-date, predictive seasonal structure? An opportunity has presented itself to redefine business models, to build a more sustainable, progressive future – and, frankly put, it would be foolish not to take it.