Scientists are alarmed by a ‘dangerously fast’ growth in atmospheric methane. Reportedly now thrice as prominent in our atmosphere as pre-industrial levels, there are concerns that the planet may actually be harming itself.

With the need to decarbonise industries taking precedence, it appears we’ve been overlooking the steady growth of methane – a gas, which worryingly, is 25 times as effective in trapping heat.

Slowing around the turn of the millennium, methane levels began a rapid and unexplained uptick in 2007. Levels have since risen gradually year on year, and researchers are concerned climate change may be creating a sort of feedback loop that is causing even more natural methane to be released.

Essentially, climate scientists are pointing to our warming atmosphere as the reason for new wetlands sprouting across the globe.

With permafrost melting and water levels rising, these bogs, swamps, and marshlands – all of which are breeding grounds for bacteria that produce methane – are now largely considered the biggest offenders for warming tied to the gas, period. 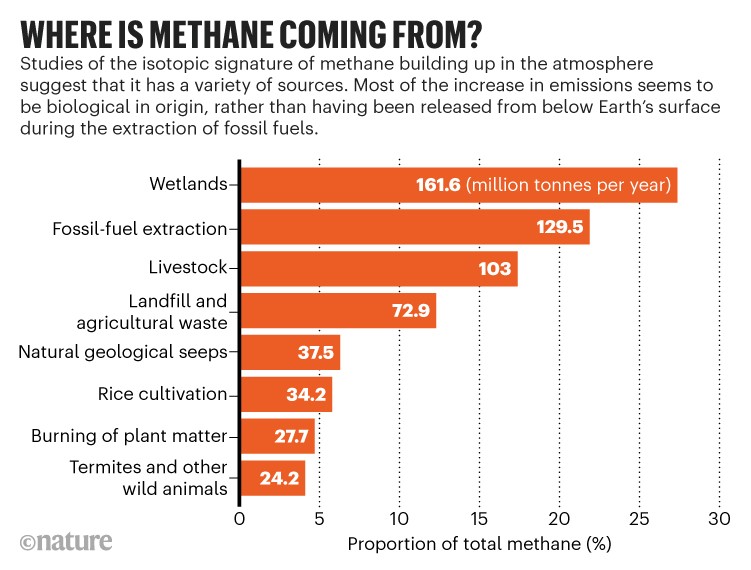 ‘Is [global] warming feeding the [methane] warming?’ asks Euan Nisbet, Earth scientist at the Royal Holloway University. ‘As yet, no answer, but it very much looks that way,’ he says.

This theory had been gathering momentum for years, but only now it is deemed a realistic assertion thanks to burgeoning satellite technology, and comparisons to methane far preceding the Industrial Revolution. Thawing out ancient ice cores, experts at the US National Oceanic and Atmospheric Administration (NOAA) compared microbial potencies of past and present samples. This all but confirmed that extracting fossil fuels is not the biggest emitter where methane is concerned today.

Now, exonerating humanity from the bulk of the blame is a dangerous thing, especially considering the level of mitigation we need to achieve this decade. Not to mention that between 2007 and 2016, anthropogenic sources – like livestock rearing, agricultural waste, and fossil fuel extraction – did account for the lion’s share of methane output (62%).

Nevertheless, we’d be remiss to ignore what the science is saying, and it appears wetlands are far and away the biggest contributor to methane warming in 2022. The impact of wetlands is reportedly creating around 161m tons of such emissions per year, compared to fossil fuel extraction in second on 129m, and livestock in third on 103m.

So, despite the fact we can’t directly address the emission toll from wetlands, what should be the focus areas for the Global Methane Pledge – the COP26 treaty signed by 100 countries to limit such emissions by 30% by 2030?

Identifying hot spots for man-made methane leaks seems a good place to start. Speaking of which, the EPA is pushing a tech drive for satellite surveillance technology that should hopefully help to plug these holes in the near future.

It has been mere months since methane targets were established in Glasgow, but the new data suggests the pledge probably needs an overhaul already.