One of the most successful marketing ploys of the 20th century was when BP framed you for climate change.

It’s a well-known fact that the most effective defence in a criminal trial is an alternative suspect. British Petroleum, the second largest private oil company in the world, was certainly aware of this fact in 2000 when it rebranded itself ‘Beyond Petroleum’, beginning an international marketing and PR campaign which would popularise the now very familiar ‘carbon footprint’.

BP’s second christening came a little over ten years on from James E. Hansen’s ground-breaking Senate testimony that ‘the greenhouse effect has been detected and is changing our climate now’. At this time, even the sceptics were beginning to look at the severe drought and heat ravaging the US yearly and the vast fires in the Amazon with raised eyebrows. The Intergovernmental Panel on Climate Change had steadily been accumulating reports that pointed the finger firmly at the oil and gas industries, and as the hole in the ozone layer continued to grow there was chatter, even then, of a carbon tax.

Heavy emitters went into damage control mode, knowing it was imperative they craft their own climate change narrative alongside the one writ large by science. So, throughout the early aughts, you began to get ads like this one:

Geometric patterns in bright colours oscillate into satisfying formations as a soothing British woman waxes lyrical about solar panels and ‘cleaner petrol’. ‘Can 100,000 people in 100 countries come together to build a new brand of progress for the world? We think so’, she declares triumphantly as the violins reach their crescendo.

At the time of this campaign’s release, BP was producing around 2 million barrels of oil per day and had just bought their 13,000th gas station. 100,000 people in 100 countries couldn’t put a dent in the impact this one petroleum company could have if it divested even a fraction of its funds into green energy.

It was clear the message that the oil and gas industry was sending: heat-trapping carbon pollution is your problem, not the problem of the companies drilling deep into the Earth for, and then selling, carbonaceous fuels refined from ancient, decomposed creatures.

Like many fossil fuel giants, BP had hired a PR team, employing the services of the firm Ogilvy & Mather, to help turn the climate tables on the individual. The next trick in their playbook was to unveil BP’s ‘carbon footprint calculator’. 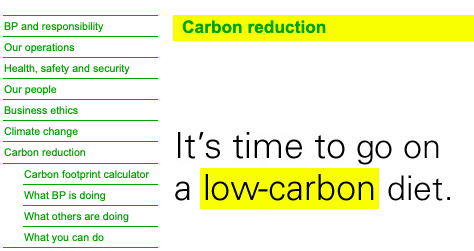 ‘It’s time to go on a low-carbon diet’, this archived webpage from 2004 declares, navigating the unwitting visitor to input details of their shopping, food, and travel habits before a program spat out their aggregated ‘impact’ on the planet. In 2004 alone, nearly 300,000 people worldwide calculated their carbon footprint on BP’s website. The innovation was matched by yet another manipulative ad campaign by Ogilvy & Mather whereby the firm wandered London suburbs and interrogated average people about their carbon footprint.

Slowly but surely, BP was linguistically replacing itself in the carbon conversation with the personal pronouns, ‘I’, ‘we’, and ‘you’. Fast forward, and it’s evident that BP itself has done nothing to curb its own footprint: the company is still producing an average of 3.8 million barrels of oil and gas every day, and in 2019, it purchased a new oil and gas reserve in West Texas that it lauded to shareholders as its ‘biggest acquisition in 20 years’. All the while, the concept of a personal ‘carbon footprint’ has become more and more intertwined with how we conceptualise climate change. Over a decade later and carbon footprint calculators are everywhere – strewn across travel sites, collated into helpful guides by influential publications like The New York Times, and across environmental protection agency websites. The term carbon footprint has been infused into our normal, everyday lexicon.

The true nature, and true genius, of the scam becomes clear when you get into the nitty gritty of an individual’s carbon options in a world still run predominantly on gas and oil. A few years after BP began their ‘carbon diet’ campaign, researchers at MIT calculated the carbon emissions of a homeless man who ate in soup kitchens and slept in homeless shelters in the US. They found that that individual would still be indirectly emitting some 8.5 tonnes of CO2 each year.

BP sought to explain the carbon crisis in a way that assigns responsibility for it to the careless individual driving a diesel car, whilst BP itself registers its own concerns by appearing already to be doing something about it, all the while avoiding outlining a specific accountability plan. But, if even a homeless person has an unsustainability high carbon footprint, the reality for the average individual is even more untenable as long as fossil fuels are the basis for the energy system. Thred Daily – How does Greenland’s ice sheet impact the environment? The carbon footprint is designed to keep the concerned climate hawk in a destructive, self-flagellating cycle trying to reach a goal they can never attain, distracting them from the true culprits.

John Kenney, one of the creators of BP’s ad campaign who approached Londoners on the street, later acknowledged the sham foundations that held up BP’s ‘beyond petroleum’. ‘I guess, looking at it now, ‘beyond petroleum’ is just advertising,’ he wrote in a New York Times Op-Ed in 2006. ‘It’s become mere marketing — perhaps it always was — instead of a genuine attempt to engage the public in the debate or a corporate rallying cry to change the paradigm… They didn’t go beyond petroleum. They are petroleum.’

I'm hearing too much false dichotomy and not enough consideration of the fuzzy, bi-directional relationships between individual / community activism, power structures and deep investment in effective lifestyle changes. https://t.co/XCfD34Uh29

I know from personal experience that the pressure of reducing one’s carbon footprint hangs heavy on younger generations, who are looking down the barrel of a long, arduous fight against climate change that they may well lose, the bounty for which should have been their birth right: a liveable planet.

Indeed, the concept of the carbon footprint is buried so deep in the zeitgeist now that there’s little chance of removing it. But, to echo the sentiments of Jennifer Marlon, a researcher at the Yale Program on Climate Change Communication, and Geoffrey Supran, a science historian at Harvard University, the meaning behind the phrase can be expanded.

Lowering your carbon footprint shouldn’t just mean recycling and reducing your red meat intake (though those things when accumulated are still important) but should include engaging with prevalent narratives about climate change whilst probing their accuracy. Climate literacy should involve scepticism towards corporate propaganda, and consistently emphasise that the true battleground in the fight for the planet is the corporate arena, and, critically, the voting booth.

Our carbon footprint will be lower, and our choices as individuals will carry far more weight, if we have the option to make better choices. Reports have shown that the greatest deterrent for middle class Americans towards buying electric cars (which currently make up 1.8% of cars in the US) is the quite reasonable concern that they’ll run out of power on the highway. There are nearly double the amount of gas stations in the US as electric filling station, and the latter are clustered around urban metropolises. What would happen if, instead of 111,000 petrol stations in the country, state governments collectively input 100,000 electric chargers?

Similarly, a 2019 survey of Londoners found that many would bike more if there was a greater number of safe, accessible bike paths and easy parking. 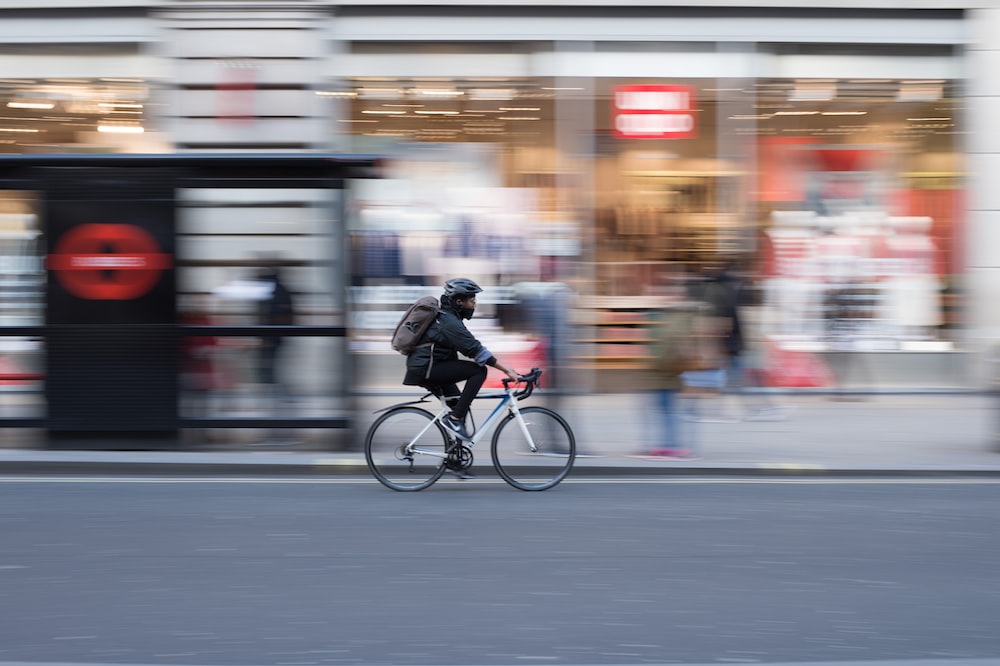 Ultimately, despite what BP and its affiliates want you to believe, the consumer has far less control over their own circumstances than governments or big corporations do. Macro decision-makers create the context that consumers have no choice but to exist in, and voting rights are the only point at which this flow of influence becomes two-sided. It’s never been more important to take full advantage of our representative democracies.

The final nail in the coffin for the concept of an individual carbon footprint has come this 2020 with the worldwide pandemic. Forced by an invasive parasite, many of us dramatically slashed our individual carbon footprints by staying indoors, not traveling and barely consuming, for months at a time. Yet, critically, the true number global warming cares about — the amount of heat-trapping carbon dioxide saturating the atmosphere — won’t be impacted much by an unprecedented drop in carbon emissions in 2020 (a drop the International Energy Agency estimates at nearly eight percent compared to 2019).

This means bounties of carbon from civilisation’s cars, power plants, and industries will still be added to a swelling atmospheric bank of carbon dioxide, with 2020’s deposit only marginally less than last year’s. In fact, the levels of carbon dioxide in Earth’s atmosphere peaked at an all-time high in May, all because big companies like BP are still making massive carbon deposits.

When it comes to the upcoming US election, any Gen Zer who desires greater accountability for firms like BP must vote for leaders who, among other things, have plans or strategies to slash the rampant flow of fossil fuels through the economy, mandate buildings that use less energy, accelerate the electrification of the transport sector, and propose comprehensive carbon and virgin plastic taxes.

BP wants you to accept responsibility for the globally disrupted climate, and for a crime that it’s been committing for decades. Just like CocaCola consistently blames consumers for plastic pollution and, back in the day, tobacco companies blamed smokers for becoming addicted to its products: we’ve seen this ploy before.

It’s time to see our ‘carbon footprint’ for the tiny thing that it is, and our voice and vote as the bastion of liberty and influence that it is.