The planet has dimmed by 0.5 percent in 20 years. Researchers believe climate change could be responsible.

Half a percent of dimming in 20 years may not sound like a huge deal, but considering the Earth is 4.5 billion years old it isn’t exactly great.

When talking about the Earth losing its shine, we aren’t referring to Mars exploration being the hot new topic in planetology, or making a bleak metaphorical inditement against humanity.

We’re quite literally talking about dwindling levels of sunlight being reflected off the planet and back into space – which is incidentally how the Moon gets its glow.

In-fact, the brightness of the Earth is precisely measured by determining how much light is being reflected by the Moon’s surface. Over the last 20 years, these ‘albedo’ figures have been recorded whenever the Moon is visible in its slim crescent form with clear weather conditions.

Examining data over the last two decades, atmospheric researchers have declared that climate change – already deemed to have shifted the planet’s rotational axis – may be responsible for a gradual dimming of Earth’s overall shine. Though correlation may not indicate causation just yet.

What cannot be denied is that Earth is absorbing more radiation than in previous decades, which coincides with the most notable dips in albedo throughout 801 recorded measurements.

Analysing satellite data at the Big Bear Solar Observatory in California, astrophysicist Philip Goode believes that sparse cloud coverage above the Pacific coasts of North and South America could be a key causation for the recent changes. The Earth today is trapping nearly twice the amount of heat recorded in 2005, thanks to our ever-pressing issue with greenhouse gas emissions. This means that low-altitude clouds are drying up and revealing the darker (and far less reflective) ocean surfaces underneath. 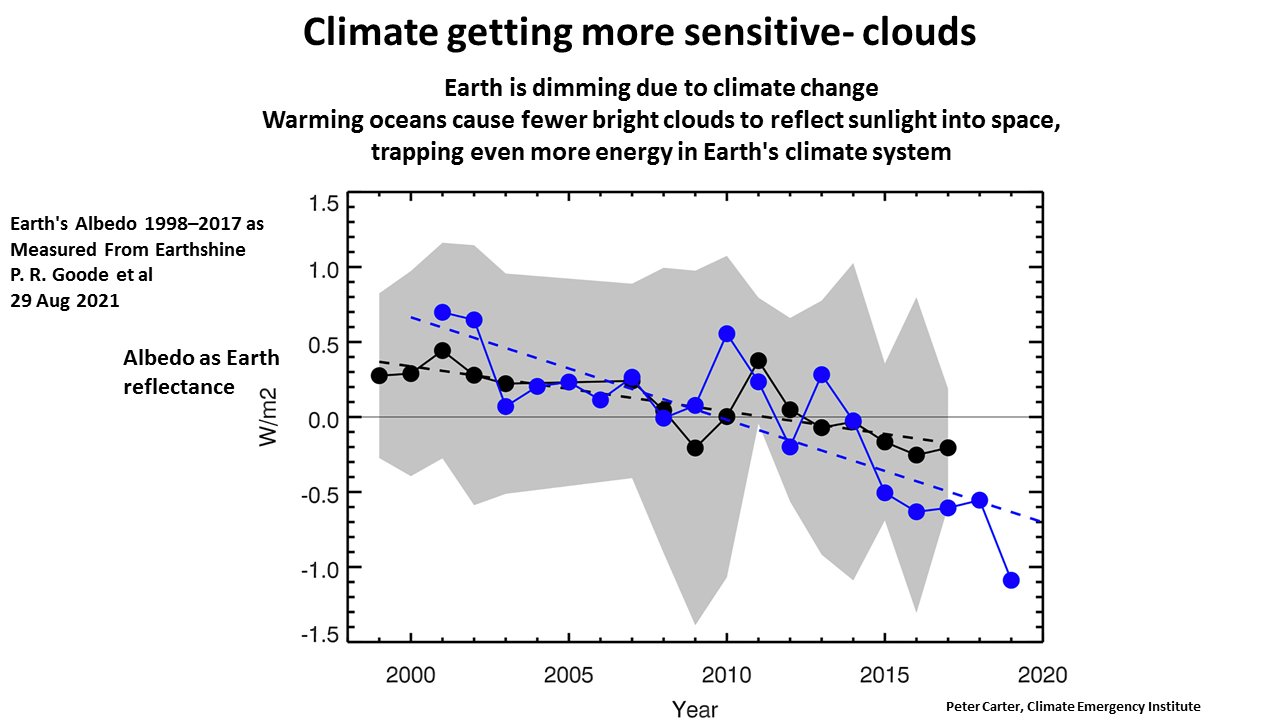 With cloud loss particularly bad across the Pacific, his calculations suggest that our planet’s surface is absorbing an extra 0.5 watts of radiative energy per square meter compared to 1998. I know, I’ll never look at a beautiful summer’s day the same way again either.

‘Whether or not this is a long-term trend [in Earth’s reflectivity] is yet to be seen,’ says fellow planetary scientist Edward Schwieterman. However, he believes such correlations ‘strengthen the argument for collecting more data,’ which can only be a good thing.

Elsewhere, at the University of Princeton, researcher Shiv Priyam is pointing to melting glaciers as another potential factor behind our dimming planet.

Perishing at a rate of 1.2 trillion tons a year, sea ice (particularly in the Arctic) is constantly under the threat of rising radiation levels. Once glaciers melt, the ocean becomes even warmer – which in turn leads to further ice loss. It’s a grim cycle to say the least.

With mother nature’s ability to adapt, science had long hoped and theorised that a warmer Earth might lead to more clouds, a brighter albedo, and some form of climate balance. As Schwieterman states, however, this research ‘shows the opposite is [could be] true.’

While we wait for more conclusive research on the subject, which is all but sure to take place in the near future, let’s not bemoan the grey winter skies eh?