At the helm of fashion’s reset period, designer Iris van Herpen has unveiled a haute couture dress made entirely from plastic fabric produced by Parley for the Oceans.

Neither tradition nor a global pandemic can hinder progress it seems.

Yet another step forward amid fashion’s moment of reckoning (brought about by the disruptions of 2020 as well as by consumers more conscious than ever before about the industry’s impact on the planet), Iris van Herpen – whose last venture proved that one-of-a-kind designs can indeed be achieved using 3D printing technology – has unveiled a haute couture dress made entirely from upcycled marine debris.

The fusing of nature with technology – and the revelation that the two have more in common than we often assume – is the foundation of Van Herpen’s work.

And, in an industry that goes harder and faster with every passing season, the innovative Dutch designer is renowned for taking a deeply considered approach to what she does.

Recently debuting her most recent foray into the natural world as part of the SS21 Haute Couture schedule, Van Herpen is once more forcing us to question whether or not her garments are in fact living, breathing entities.

Dedicated to exploring and utilising new sustainable fabrications and practices, the majority of the offering has been constructed from eco-friendly materials.

Titled Roots of Rebirth, the collection draws inspiration from Merlin Sheldrake’s Entangled Life, a book about how fungi and its vital place in the earth’s fragile ecosystem.

The pieces themselves are a reference to the ‘intricacy of fungi’ and the interconnectedness of style and nature. Most exciting of all, Van Herpen has joined forces with Parley for the Oceans, a company which transforms dumped plastic debris sourced from the estimated eight million tons of waste that ends up in our oceans annually into ground-breaking technical fabrics by shredding them and reworking them into yarn. 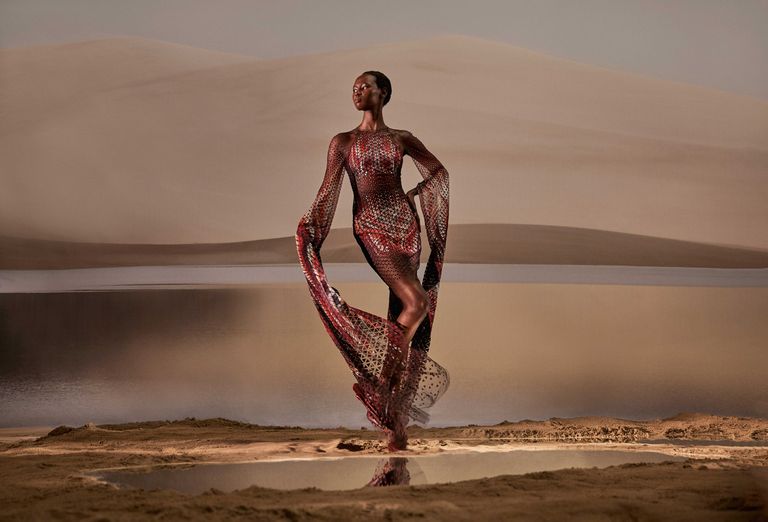 Implementing these kinds of sustainable and recyclable materials into the collections is an ongoing development in her atelier. ‘Parley for the Oceans has great expertise in recycling plastic from the ocean and transforming it beautifully into soft upcycled fabrics,’ she says. ‘The quality of their fabrics is really refined, and therefore perfectly suitable for haute couture also.’

For the dress, the designer first printed the fabric before laser-cutting it parametrically into fine triangle tessellations, in order to create a ‘translucent and fragile interconnectedness’ with the skin.

‘It’s mesmeric to see such fine fabrics that were made from 100 per cent recycled fabric from the oceans,’ she adds. ‘When most people think of recycled fabrics, they think of stiffer, less appealing materials. But that is history now, partly thanks to Parley – the quality of the recycled fabrics is now so high that it is usable for even high-end couture looks.’

Van Herpen goal is to eventually make her collections from 100% recycled materials. Until then, it appears as though we’ll have to make do with swooning over the SS21 collection in all its natural glory. Already facing the negative repercussions of a pandemic, British fashion designers, manufacturers, and retailers are concerned that the new Brexit deal will only exacerbate the situation. Fashion in the time of a global virus outbreak is definitely an unusual business. Over the last year we’ve witnessed the industry experience huge disruptions, the long-lasting effects of which will likely stretch far beyond our return to normality. From the cancellation of major events,... A first of its kind, C-List is host to advice, product recommendations, beauty tutorials, and a supportive online community for people diagnosed with cancer. Highlighting a lesser-known challenge faced by cancer patients, The C-List is an innovative new website giving those living with the disease the chance to shop ‘cancer-kinder’ beauty products. While it may not seem like the most essential consideration following a diagnosis, founders Lisa Potter-Dixon and Helen Addis... Though the number of people shopping consciously has soared in recent years – with Gen Z at the helm – fast fashion’s demise isn’t nearly as tangible as you may have assumed. Here’s why. Over the course of the last 18 months, a plethora of headlines touting the death of fast fashion (whereby trend-led clothing is mass-produced to be sold at a reduced price on the high-street) have graced... How Amazon and TikTok are leading the digital clothing takeover

Between Amazon’s fashion ambitions and TikTok exploring new e-commerce features to monetise viral content, style-focused consumer buying habits continue to go digital. It’s no secret that Covid-19 has changed the face of online shopping for good. Accelerating a shift towards a more digital world, the pandemic has triggered a wave of new buying habits likely to have long-lasting effects. According to a recent survey of over three thousand consumers in nine...