Gen Z, the very demographic most devoted to throwaway fashion, understands the importance of wearing an article of clothing many times to justify its environmental cost. For this reason, the repair revolution – an integral part of the industry’s push for sustainability – is well underway.

Resale, rental, regeneration – you name it. In 2022, there’s no shortage of ways for the style-obsessed among us to ensure we’re being as conscious with our consumerism as possible.

However, as planet positive as these options are, the world is still drowning in fabric, and to truly move away from throwaway fashion’s clutches, tailoring what we already have and consequently increasing its lifespan is our best bet.

Yet although the ‘make do and mend’ approach is nothing new (the term was originally coined during the second world war), many of us lack the skills required to actually adopt it.

A survey from 2017 showing that 60% of British people can’t sew on a button proves this.

In the digital age, where trends come and go as frequently as the posts we aimlessly scroll past on our social media feeds, disposability has become widely acceptable, and we’re far more likely to purchase an outfit with the intention of wearing it once than we are to pick up a needle and thread.

In fact, according to the Ellen MacArthur Foundation, which endorses waste reduction, we’re currently buying 60% more garments than we did a decade ago, but we’re only keeping each item for half as long.

To put that into perspective, an estimated 336,000 tonnes of used clothing is discarded every year in the UK alone.

It’s for this reason that a collective shift in mindset is both overdue and necessary. One that will see us begin to treat the contents of our wardrobes with more care and an increased sense of circularity.

‘We know that lengthening the life of our clothing from one to two years decreases their carbon footprint by 24%, so it actually has an environmental effect. And obviously keeping clothes means mending them, as things inevitably break.’

Fortunately for those of us without the faintest idea of where to start, the repair revolution is well underway, driven by grand-scale efforts and the determination of eco-friendly individuals.

Black-owned Sojo is one of many examples of the former, launched last January by Josephine Philips with the overarching mission of improving accessibility for anyone seeking to have their well-worn clothes altered professionally.

In doing so, it’s successfully cutting the number of damaged garments going to landfill that could easily be made good-as-new, an endeavour that hasn’t gone unnoticed given the company recently announced it had raised $2.4m in funding to turbocharge closing the loop.

And it’s not just start-ups leading the charge, either.

During the pandemic, several major luxury brands from Burberry and Louis Vuitton to Hermès and Gucci expanded their capacity to repairs, as did some high street chains including H&M, Patagonia, and Uniqlo. 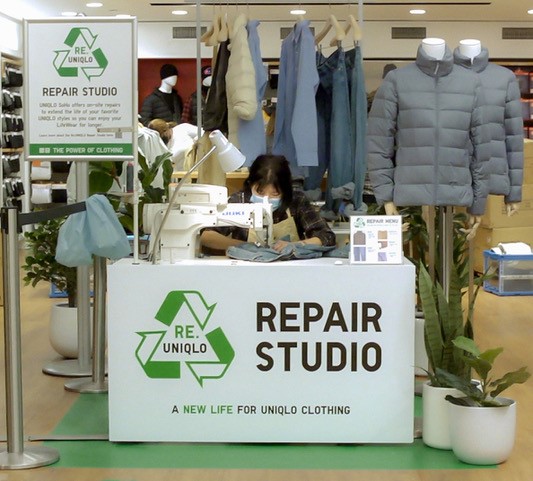 But let’s not get ahead of ourselves, because regardless of how our favourite designers choosing to jump on the bandwagon is a step in the right direction, many continue to argue it’s too costly, time-consuming, and logistically difficult to do at large.

That’s why the responsibility has fallen into the hands of independent businesses and the aforementioned individuals dedicated to bringing about change.

Spearheading this is Gen Z, the very demographic most devoted to splashing their cash on outfits promoted by the influencers and celebrities they follow online, but also one that appears to be gradually broadening their understanding of the importance of wearing an article of clothing many times to justify its environmental cost.

The catalyst for this is has been rising concern about the Earth and the rekindling of our appreciation for cultural resourcefulness.

‘Every survey we’ve done shows young people care about the environment above any other cause,’ head of content at youth consumer insights firm YPulse, MaryLeigh Bliss, told the Telegraph.

‘But equally, they’ve grown up in the shadow of a recession and are about to live through a cost-of-living crisis – and price is everything to them. The way I see it, you have two options if you want to shop for less.’

‘You buy fast fashion, or you mend your clothes and buy second-hand. There’s a real kind of beauty in wearing something that has been lovingly, even if not very skilfully, preserved.’

This is most apparent on TikTok, where the hashtags ‘thrift flipping,’ ‘DIY,’ and ‘upcycling projects’ are hugely popular, often accompanied by impassioned clips of young people like Andrew Burgess imploring their peers not to shop for cheap clothes.

Then there are the Gen Z creatives using their platforms to virtually teach others how to breathe new life into their textiles, with in-depth videos explaining how to patch rips, darn holes, and replace fasteners rife across YouTube, Twitter, and Instagram.

‘There is no circular movement without care and repair,’ says Emily Rea, head of marketing at aftercare specialists The Restory.

‘I think it hasn’t had the same spotlight as rental and resale, because it fundamentally wasn’t new. But actually, aftercare and repair is crucial to even unlock rental and resale. You can’t keep renting something without cleaning it or if a button comes off, repairing it.’

‘If we keep our clothes as long as possible, we are sending a very clear message to the brands. “I have enough. You’ve given me too much. I want better, not more”.’

Ultimately, no matter how big or small, initiatives that encourage clothing longevity are vitally significant in a sector that has instead upheld accelerated disposal for decades.

On this note, hope lies in the potential of making do and mending.

Fingers crossed the moment it’s having is here to stay.