New research shows that unreliable body image perception is far more pervasive than initially assumed. Fortunately, state of the art digital therapy to tackle this is in the works.

If you criticise your appearance every time you see your reflection – even in the smallest way – or feel constant unhappiness whenever glancing in the mirror, chances are you’re experiencing ‘normative discontent.’

The phrase, which was originally coined in the 80s to describe generalised negativity towards weight and physical appearance, has found its way back into mainstream media thanks to a recent study by researchers at the Medical University of Silesia.

Of the 750 participants involved, less than half of them were able to correctly estimate whether they were underweight, a normal weight, overweight, or obese.

Why? Because body misperception is not associated with eating disorders or dysmorphia, rather it’s a perpetual dissatisfaction in what we actually have, an emotional reaction to seeing ourselves in ways that others do not, which arguably affects us all.

I mean, who truly has nothing but nice things to say about their looks? It’s less a problem of perception, more one of cognition and evaluation. Simply put, what we judge to be ‘skinny’ or ‘fat’ is so ingrained into our psychologies that regardless of our inner feelings and concepts of our size, we’ll still overestimate.

‘The word ‘normative’ suggests it is not actually seen as a problem by many… being generally unhappy with your lot is acceptable and normal, and therefore it is okay to be unhappy with ourselves,’ says integrative psychotherapist Liz Ritchie.

‘Feeling negative about ones appearance becomes a way of life for many and becomes very restrictive.’

As Ritchie explains, this leaves us in a state of self-sabotage as we are eternally searching for something better, a mindset that’s, of course, exacerbated tenfold by social media and the comparison culture it fosters. Opinion — Lockdown didn’t hinder my eating disorder, it helped it

‘We live in a time where we have obsessive and incessant conversations about food and body size,’ she continues.

‘Many of us seek perfectionism, and images online can reinforce these ideals, which of course maintain the narrative of normative discontent as perfectionism is an unattainable ideal. This can result in significant mental health issues including social and body dysmorphia.’

Yet with a society that disapproves entirely of toxic beauty standards and is, instead, wholly accepting of body neutrality a long way off indeed, the immediate solution to preventing us from seeing ourselves differently from how we really are appears to be tech-focused. 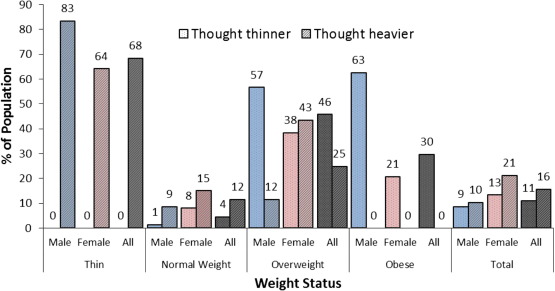 Namely a virtual reality experiment whereby the person wearing the headset is repeatedly confronted with a life-size CGI body in varying states of weightiness, one after the other.

Required to categorise these biometric avatars – based on real 3D data from a participant’s body turned into a digital artificial model – as either big or small, the aim is that their boundaries will eventually be shifted.

‘We’re trying to disentangle perception and evaluation,’ says Dr Katrin Giel, a psychology professor at the Medical University Hospital in Germany and the brains behind this technology.

‘Preliminary data suggests that people are in fact accurate at estimating their size, but then the attitudinal body image kicks in and scuppers their thoughts about themselves,’ she adds.

‘The idea is to tackle people’s fear of weight gain with state of the art therapy by shining a light on their perceptions. We are hopeful, convinced, that it is going to be helpful.’

In the meantime, let’s try to be a little kinder to ourselves by learning to recognise the unrelenting negative self-talk that defines normative discontent and choosing, best we can, to ignore it. The way we consume products affects the planet we live on. In light of World Oceans Day, it’s time we highlight initiatives and brands working together to create products that leave our seas better off.   While improving the health of our oceans will require a collective effort on a variety of different fronts, figuring out how to eradicate the most visible culprit – plastic pollution – is one of...