We tend to see fine art as the essence of human experience, but AI could soon be helping paint the world’s next masterpieces.

I still remember the first time I became aware that the world’s biggest painters have assistants to help them create large bodies of work.

It makes sense practically, of course. When looking at art that uses upwards of 50 separate pieces to create sprawling mosaics – like David Hockney’s Yorkshire Dale series – it’s unrealistic to expect one individual to produce everything. Still, there was a part of me that was shocked to find out artists don’t create absolutely all of the pieces they’re credited for.

That idea is now being taken a step further, as a report by the Frontiers in Robots and AI journal has unveiled a new collection of miniature robots designed to help painters create big projects quickly and easily. We’ve even got footage of them working on nine separate pieces based on human commands, which you can watch below. 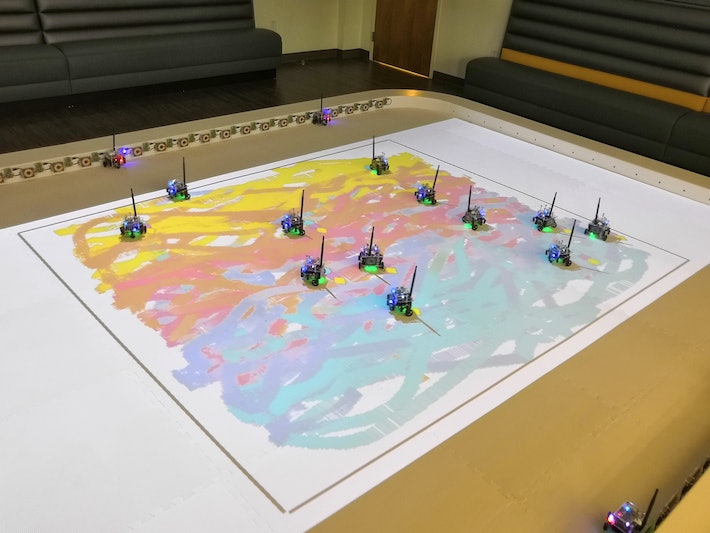 Soon we may not even have actual people working on prolific art projects, which is both exciting and a feels like something ripped straight from The Matrix. Maybe in the upcoming fourth film Neo takes on robotic painting and becomes a world famous artist? One can only hope. Are microscopic robots the future of invasive human treatment?

There’s still a hefty amount of work to be done before these robots are commercially usable, and it’s worth noting that the video above was done with ‘fake’ paint via projector lights. They imitated where actual paint would go to avoid mess and potential damage to robot parts which is fair game, really, considering the experiment was carried out by a prototype.

Twelve miniature robots were part of a ‘swarm’ that painted across an 8 foot by 6.5 foot canvas, each being able to print cyan, magenta, and yellow. Right now the robots are only able to do basic, abstract block colour paintings, but scientists involved in the project have said they plan to refine the process and allow more detailed instructions soon.

They look a bit like the robot from Rick and Morty that asks about its ‘purpose’, except here they’re used to create art rather than pass butter across a dinner table. Hopefully these ones don’t have an existential crisis halfway through.

A human artist can control the robots by inputting a chain of commands before painting. You’ll have to describe which areas to paint and how to mix the colours accordingly, but after that you’re free to sit back and watch the AI swarm get to work.

Similar techniques could be implemented into other creative industries outside of traditional art in the future too, including live orchestral performances – though that is already a thing, apparently. Check out this unnerving but impressive giant mechanical hand waving a baton to a team of human musicians.

Google released a programme in 2016 called ‘DeepDream’ that looks for patterns in already existing images and enhances them. The effects are nightmarish and trippy, but show off the potential that pattern-matching algorithms have for the future, especially if they can be combined with the power of tiny painting robots.

A few more years and we may well see painting rooms and studios full of AI assistants helping to create the next big collage or canvas collection, and you may one day pop into your local gallery and see new works that weren’t even created by human hands.

With that being said, we’ve a while until we’ll see full scale oil paintings or detailed scenic landscapes made from robots. Art assistants the world over can rest easy for now, but an automated shake up to the painting world may be closer than we think.