As you might’ve guessed, our annual affinity with dressing up for spooky season is nothing short of an environmental nightmare. Turns out the waste we generate with throwaway costumes is even more frightening than the get-ups themselves.

In 2019, Hubbub – a charity dedicated to inspiring ways of living that are good for the environment – disclosed a finding even more terrifying than the holiday we eagerly anticipate the moment October rolls around.

And no, I’m not referring to a resurgence of the great clown panic of 2016, but the fact that our annual affinity with dressing up for spooky season is contributing rather drastically indeed to the current climate crisis.

As it turns out, an estimated 2,000 tonnes of plastic waste were generated that Halloween from throwaway costumes bought in the UK alone.

Working with Fairyland Trust, Hubbub’s investigation of these get-ups from 19 supermarkets and retailers (including ASOS, John Lewis, Amazon, and Tesco) discovered that almost all of the material used to make them was polluting oil-based plastic likely to end up in a landfill. Freddy Krueger who? 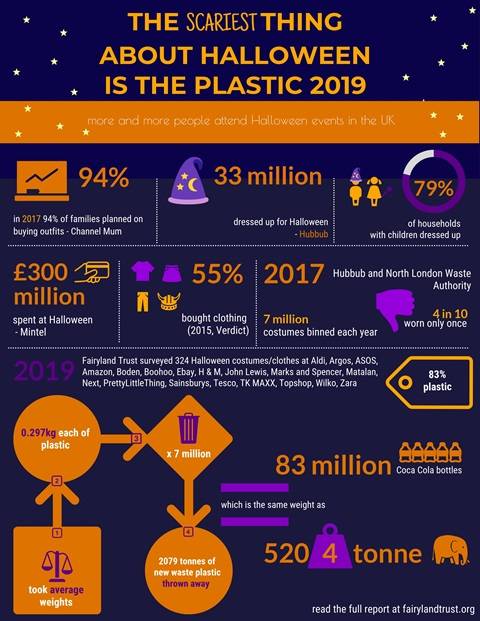 While this figure is thought to have declined last year during the pandemic-induced lockdowns that meant we couldn’t celebrate anywhere but within the confines of our own homes, activists are concerned that our newfound freedom to party may well signify another boom in costume purchases.

If the past is anything to go by (seven million themed outfits were discarded at the time of the survey and only a tiny proportion recycled), this would see us reverse a lot of the progress we’ve made in our fight to safeguard the future of our planet.

‘Unless brands and manufacturers take action to increase the use of non-plastic alternative fibres such as cotton, viscose, and lyocell, the huge carbon footprint of Halloween is likely to continue,’ stated the report.

‘Without regulatory action to limit plastic entering the supply chain a comprehensive solution is unlikely to be found.’ Thred Daily – Why a glitter-free Christmas is a greener Christmas

Fear not, however, because – appearing to hear Hubbub’s cries to make fright night more sustainable – Morrisons just launched a costume range crafted entirely from responsibly sourced fabric and recycled polyester from plastic bottles, all of which is machine washable so they can be passed onto others over and over again.

The chain has also removed all plastic hangers from the collection, replacing them with a cardboard version.

‘Listening to customers, we know that while they love Halloween and the theatre that comes with dressing up, making the event more sustainable is really important to them,’ explains buying manager Jodie Glew.

‘So we’ve worked hard with our team this year to create a range that is not only made using 100% responsibly sourced materials, but can also be machine washed – cutting down on waste and encouraging re-use year after year.’

Yet the responsibility doesn’t solely fall on the companies churning out an overwhelming quantity of these items, of course.

Conscious consumers can take personal action to avoid buying new plastic and still dress up by shopping at thrift stores or re-using what they already have.

Plus, though I doubt anyone’s going to care that much if you rock up as the Joker for the 3rd time in a row, you could always make your own costume using the plethora of DIY hacks you’ve favourited on TikTok.

Anything’s bound to be better than buying into the nightmare that’s fast fashion.