I spoke with the environmentalist about society’s need to protect young people’s mental health in the face of our current climate crisis and how this frustration can be turned into constructive activism.

If, during the last few years, you’ve experienced an overwhelming sense of concern regarding the current state of our planet, know that – by all means – you are not alone.

Clover Hogan, now 22, often lies awake at night gripped by the same panic. She’s part of a rapidly increasing number of Gen Zers suffering from ‘eco-anxiety’ whereby they’re finding themselves stressed, fearful, and even depressed in the face of the climate crisis.

‘Our research shows that more than 70% of 500 young people in 52 countries not only feel like the issue is contributing negatively to their mental health, but that it’s also making them feel powerless,’ she explains, highlighting the importance of mobilising mindsets to turn this frustration into agency.

This is what Force of Nature – the non-profit organisation Clover founded in 2019 – is striving to do: cultivate the resilience and determination of today’s youth to drive genuine, transformative change. But why did she begin investigating this in the first place?

An environmentalist for over a decade, Clover has dedicated half her life to saving the Earth.

Raised in a ‘bubble of nature’ as she calls it, the Australian native was heartbroken throughout her childhood witnessing the detrimental impact of human life on her surroundings.

‘At age 11, I started to see how quickly we were devouring our planet and how good we were at pretending otherwise,’ she says.

‘I experienced sheer despair, a deep sadness, and unshakeable anger towards what we were doing, but most of all I couldn’t understand why the adults in my life had never told me about these things.’

Clover outlines that society, at present, is undergoing ‘mass amnesia’ towards the damage we’re inflicting on nature, lulled into complacency and subscribed to a story that doesn’t serve the future we want to create.

Nor young people, for that matter, ‘because they’re plastering over their feelings – and the knowledge that something is seriously wrong.’

This, she tells me, was her catalyst.

Without a specific term to define her emotions and an acute awareness of the lack of support from education systems and authoritative bodies, a 16-year-old Clover decided to write her thesis on ‘ecophobia’ which relates directly to the feeling of helplessness amid environmental collapse.

‘It’s a symptom of being raised to love nature, while also becoming complicit in its destruction,’ she laments. ‘That’s one of the most crippling aspects of the climate crisis: the fact that by the nature of how our lives have been designed in the 21st century, we are all in some way contributing to it.’ 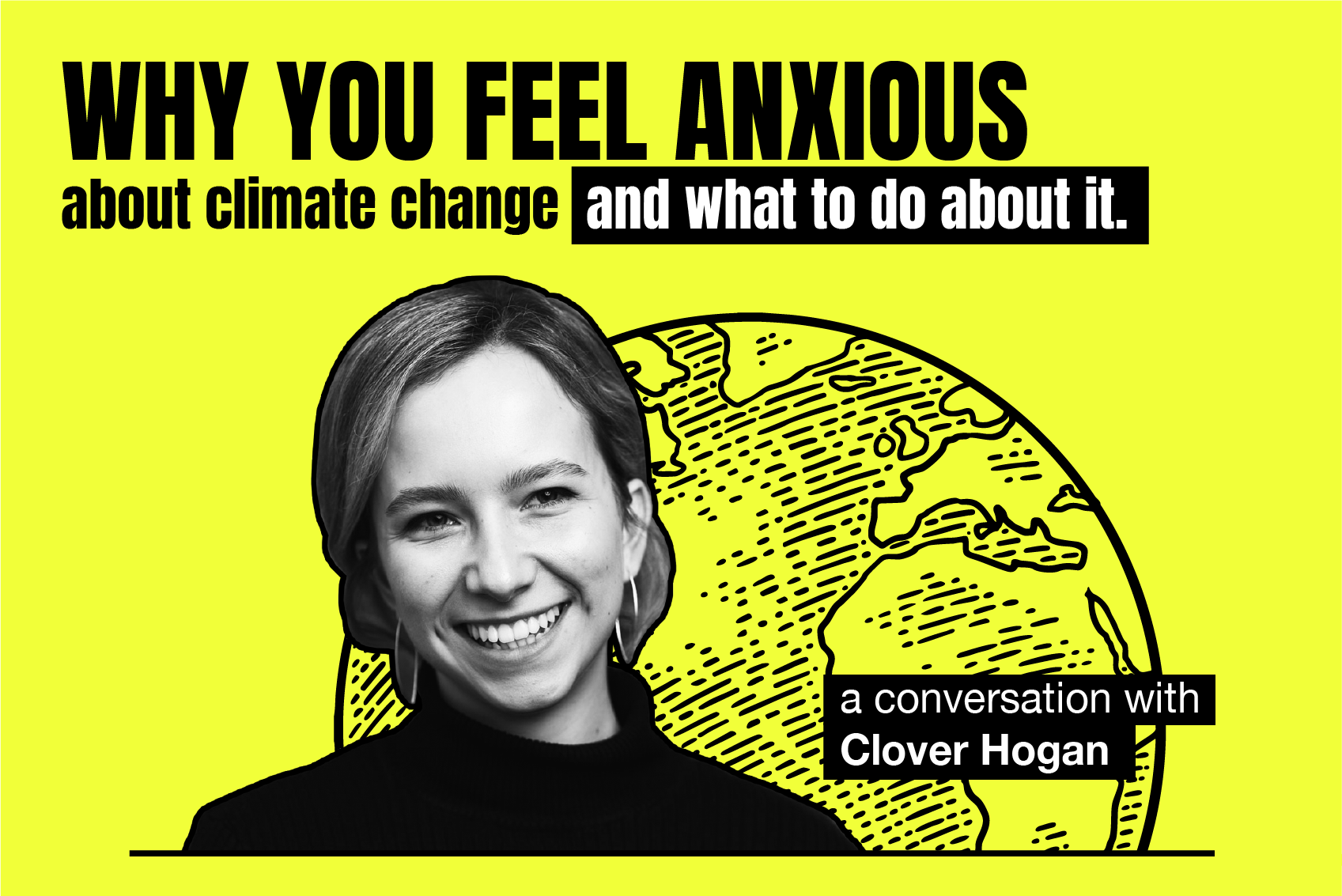 Alongside eco-anxiety, ecophobia has been on an upward trajectory for some time now amongst Gen Z, who are often referred to as the most depressed and anxious generation in history.

Clover partially attributes this to life in a digital age.

‘Everything on my feed these days would terrify anyone, let alone a young person growing up with the knowledge they must one day take on the fallout of these challenges,’ she says.

Though she doesn’t discredit the power of social media, deeming it an incredible tool for democratising information.

‘I’ve spoken to 12-year-olds who describe the climate crisis as a “systemic issue entrenched in centuries of the commodification of nature and exploitation of vulnerable communities”,’ she says. ‘This deep understanding of their roots and level of awareness is amazing – it’s so powerful.’

With Gen Z inheriting an ecologically unstable planet and the burden of unlearning centuries of damaging habits, Clover wants us not to feel helpless, but empowered – no easy feat, unfortunately, given that the exploration of mental health in conjunction with climate change is a relatively new thing.

‘Mental health is pivotal to being able to bring about climate action,’ she says. ‘So, we’re really trying to take the conversation around both eco-anxiety and ecophobia mainstream.’

By this, Clover means encouraging young people to welcome the two as normal responses rather than clinical conditions, more ‘a collection of emotions that we shouldn’t pathologise because they prove we’re empathetic, that we aren’t numbing ourselves to the situation.’

The problem, it seems, lies in what happens when we don’t channel this into constructive activism, and this is exactly what Clover has set out to improve upon in 2021.

How can we navigate these feelings and turn them into agency?

‘Anxiety can be a critical catalyst for action,’ she responds.

‘When we allow ourselves to experience the depth of our feelings (creating a ‘container’ by way of community, and ‘outlet’ through activism), we’re in a better position to step up, rather than shut down.’

Warning that without the vital ingredient of agency, eco-anxiety can tip into ecophobia, Clover and her team at Force of Nature are fostering spaces for young people to embrace these emotions judgement-free.

Regardless of this warm invitation to reframe the climate crisis, however, it can be difficult to avoid feeling inundated by what many consider a system too broken to create meaningful change, particularly in a digital age that sees us plugged into what’s going on 24/7.

According to Clover, this frequently manifests itself as ‘paralysis,’ which can consume us by turning valid and progressive thoughts into negative self-talk. For this reason, she recommends we home in on what ignites the fire within us most and find our impact through focus.

‘There is literally no shortage of terrible things happening across the globe right now and we have a tendency to spread ourselves thin wanting to do something about them all,’ she explains. ‘While empathy is great, we must find our one sphere of influence, choose what we personally believe we can solve.’

Thankfully, with the language to now successfully place these feelings, more and more young people are beginning to break out of their uncertainty, combatting it with their vision of what is possible rather than opting to sit on the side-lines.

On the back of this, Gen Z are developing their unique skills and talents, owning their passion for a better future, an alternative world.

‘I find it so energising to work with young people because we haven’t been around long enough to let society clip the wings of our imagination,’ says Clover. ‘They have an innate ability to think outside of the system, to remind themselves that there’s no such thing as being too small to make a difference.’ Exclusive – Melati Wijsen on the power of today’s changemaking youth

So, what’s the next step?

To put it simply, intergenerational exchange.

Clover not only works with an inspirational network of aspiring changemakers, but an ecosystem of decision-makers as well.

In her opinion, urging those responsible – whether in business or policy – to question the conditioning they grew up with is the way forward, in addition to involving young people in the reframing process.

‘The enormity of the climate crisis and comparative smallness of our own actions is compounded when people in positions of power fail to act on their promises,’ she says.

‘When you’re in that echo chamber it’s hard to look from the outside in, which is why we must promote the power young people hold.’ Historically left out of the decision-making sphere (despite the fact they’re fronting the call for change), young people deserve access to the rooms in which they can constructively disrupt apathetic mindsets.

By providing them with a seat at the table, their energy can be merged with the wisdom of adult experience, a combination that Clover argues is the critical missing link in the chain.

‘We have the tech, we have the resources, we have the infrastructure and yet we don’t have the political will, the momentum and determination from each of these spaces to drive real and transformative change,’ she says.

‘What we need now is more youth involvement.’

Though we must be wary of tokenising their voices, Clover adds, noting the penchant of leaders to relegate young people to banner blazing in the streets, ignoring their power to rethink the system. ‘It can be very exploitative when our voices are used as a vehicle for greenwashing, especially those of POC activists’ she says.

‘They are already disproportionately affected by the climate crisis yet have been showing up with resilience to solve these problems for decades. They’re also best placed to talk to about a number of grassroots and frontline solutions. It’s often just laziness and ignorance, but we absolutely have a responsibility to diversify the voices we’re platforming.’

Clover is a shining example of everything she herself stands for. On an unrelenting mission to reprioritise what matters to the world, she’s both safeguarding the fragile mental health of a generation of activists and nurturing their feelings to bring about necessary agency.

‘To solve our beautiful, bright planet’s dark problems, we must refuse to be ruled by fear,’ she finishes. ‘We must discard the belief that we’re powerless and realise that we are infinitely powerful.’

One thing’s for certain, Clover Hogan is indeed a force of nature.