In an effort to reduce consumption and greenhouse gas emissions, Haarlem in the Netherlands has made the bold decision to outlaw ads for intensively farmed meat on buses, shelters, and screens.

Acknowledging the link between animal exploitation and the worsening climate crisis, a Dutch city will become the first in the world to outlaw meat adverts from public spaces.

The drastic measure – following reports from the UN that the agriculture industry contributes to about a quarter of our total greenhouse gas emissions – has been drafted by green political party GroenLinks in Haarlem, which has a population of about 160,000.

In an effort to reduce consumption and encourage more environmentally conscious lifestyles, the plan is to prohibit buses, shelters, and screens from displaying ads including everything from supermarket chicken to McDonald’s burgers.

‘If people want to continue eating meat, fine,’ says Ziggy Klazes, who is responsible for drafting the original motion.

‘What we can’t do is tell people there’s a climate crisis and then encourage them to buy products that are part of the cause.’

Set to come into force as soon as 2024, the proposed policy is part of a wider ban on fossil fuel promotion or marketing. 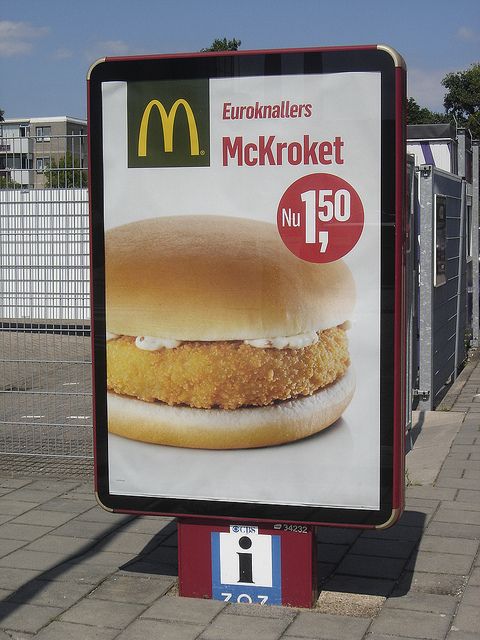 Yet although decisions to phase out the sponsorship of flights, cars, and oil (among others) have so far been welcomed by the Dutch public, the addition of meat has triggered significant backlash.

This is because opponents of the move, with the Netherland’s lucrative meat sector unsurprisingly at the helm of the criticism, believe the municipality is ‘going too far in telling people what’s best for them.’

In short, they are complaining that it’s patronising and stifles the human right to free speech. ‘Such a call is an unacceptable violation of entrepreneurial freedom and is fatal for pig farmers.’

It’s hard to deny the negative effects of agriculture, however. Numerous studies show that animals used for meat account for twice the pollution of producing plant-based foods. Forests absorbing CO2 are being destroyed to meet demand and fertilisers used for growing livestock feed are rich in nitrogen, contributing to ozone depletion.

The city of #Haarlem in the Netherlands plans to ban (!) all public advertisement for #meat!

Which city is next? pic.twitter.com/fwWADrMvTY

Taking to social media to praise the ruling, people from across the globe have begun suggesting that other cities follow suit.

‘Hopefully the Netherland’s lead will reverberate around Europe and the rest of the planet,’ wrote another.

In light of Greenpeace research suggesting that to meet the EU target of net zero emissions by 2050 meat consumption must be reduced to 24kg per person per year, compared with the current average of 75.8kg in the Netherlands (which is the EU’s biggest meat exporter), this may well be necessary.

So, will there be a day when we’re able walk through Time’s Square, Piccadilly Circus, or Tokyo without being bombarded by images of food we know deep down is neither good for us nor the Earth? Unfortunately, only time will tell.

In the meantime, hats off to Haarlem for getting the (meat)ball rolling.