The dating app has become the latest battleground in the efforts of pro-democracy protestors in Thailand.

Demonstrators in Thailand, who have taken to the streets over the past few months in their hundreds of thousands to oppose their military government and the royal family, have recently added Tinder to the list of weapons they’re using to propagate a pro-democracy message. Whilst regimes prone to censorship have long been cognisant of the utility of Twitter and Facebook for political expression, two platforms that the Thai government has already legislated against, people opposing the government on Tinder is a novel means of rebellion the administration probably didn’t see coming. 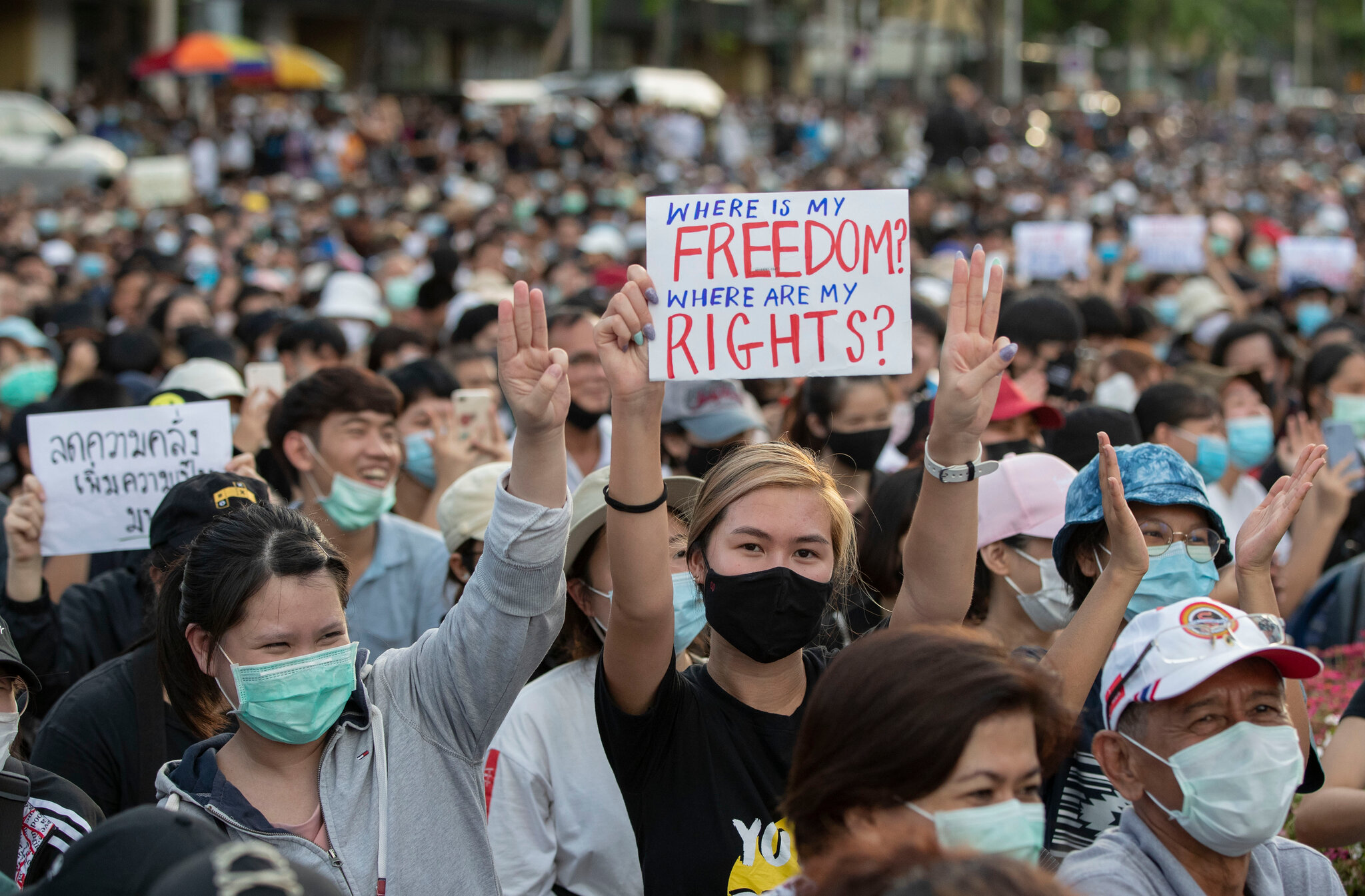 Currently, the Thai population is heavily divided between royalists, who support the Thai royal establishment and the austere military government, and those who wish to see the nation democratised. The current Thai Prime Minister Prayut Chan-o-cha, who rose to power in a coup d’état in 2014, has ruled the country unchecked for the past six years, during which political and civil rights have been severely restricted.

In 2016 the Prime Minister amended the constitution through a disputed referendum to guarantee military rule for the next 20 years. When the government’s main opposition, the Future Forward Party, was dissolved at the beginning of 2020, Thai citizens began protesting en mass, demanding the dissolution of the parliament, an end to the intimidation of citizens, and constitutional reform.

General Prayut Chan-o-cha is the worst prime minister we have ever had.

A key part of the movement’s unprecedented growth despite the coronavirus has been the popularity of social media in Thailand, where about 75% of people are active social media users (a number that rises to 90% for Gen Z). Twitter and Facebook have been major sources of coordination and communication among protesters – a precedent we saw last year in Hong Kong, and one that’s increasingly being seen in violently disputed conflicts like Syria and Iraq.

However, these platforms and other forms of digital communication are strictly monitored by Thai police, military, security agencies, and private royalist groups. According to the constitution, publishing content online that ‘causes public unrest’ or ‘threatens national security’ has led to publish harassment, arrests, and even mysterious disappearances. Offences recently added include, posting a satirical comment of the late King Bhumibol Adulyadej’s dog, sharing a BBC profile of King Maha Vajiralongkorn on Facebook, and sharing a viral anti-government rap video that reached nearly 100 million YouTube views in August (the rapper has since been arrested).

Protesters had, up until recently, been housed mostly on Facebook’s private group feature, however Thai authorities requested that Facebook ban the anti-government ‘Royalist Marketplace’ group, which boasted over one million dissidents. Facebook complied, taking down the group and geoblocking other dissenting content.

Facebook seem to be planning to re-instate the group, releasing a statement that ‘Requests like this [from the Thai government] are severe, contravene international human rights law, and have a chilling effect on people’s ability to express themselves.’ However, in the meantime, protesters are turning to Tinder to express their views.

According to Foreign Policy Magazine, young Thais have recently been using their dating profiles to spread their pro-democratic cause, writing ‘no royalists here’ and ‘freedom for Thailand’ in their bios. It’s no surprise that dating sites have become a politicised hotbed for this cohort facing 20 further years of military rule: public protest has increasingly become part of the Gen Z identity as a whole, and markers of this can be seen the world over. For the most liberal, most politically active, and most liberal generation ever, political alignment is now a crucial aspect in the romantic choices of young people.

However, the Thai censorship machine can’t be held at bay for long, even on the theoretically more private platform of Tinder. One user revealed that they were banned by Tinder after sharing a link to the movement’s 10 pro-democracy demands. Another said an image containing a QR code linked to a constitutional amendment petition was censored for violating the dating app’s terms of service (below).

Tinder has yet to provide an official statement on its actions. According to the app’s community guidelines, profiles may be removed if they are found to be set up for the sole purpose of ‘political campaign,’ but it also states that its goal is to ‘allow users to express themselves freely as long as it doesn’t offend others.’

As we’ve been shown time and time again, and in 2020 moreso than ever, social media platforms wield significant power in shaping political discussion. As significant moments in a nation’s future arise, in the same way they currently are in Thailand, these platforms are valuable tools for democratisation and should be accountable for protecting the rights of their users.

It’s telling that Facebook and Twitter, which often decry the difficulties of censoring controversial far-right content, are so quick to act on the requests of a dictatorial regime. We can only hope that these tech giants stay strong in the face of institutional pressure and re-instate the right to digital protest for all Thai citizens.

And that some fly young freedom fighters find love and ideological harmony on Tinder, of course. Melting Alaskan ice could unleash ‘mega-tsunami’ in matter of months