Trump has always been a man of hyperbole, so intertwined with his own warped sense of reality that it’s hard to know when he’s being deliberately misleading or just completely delusional.

How he has managed to remain in office for four years has astonished me. He has been found guilty of so many awful things and has shown absolute incompetence at such basic levels throughout his presidency. It feels very apt that his big ‘comeback’ rally in Tulsa for the 2020 election was met with…well, mostly silence, despite his promises of grandeur and spectacle.

You can thank the K-Pop community for that one, at least according to a report published by The New York Times this weekend. In a co-ordinated effort across Twitter and TikTok, users from the community snatched up free rally tickets via a link shared by the Trump team and then left them unused, resulting in these bizarre images of Trump doing his usual spiel to a sea of vacant blue chairs. 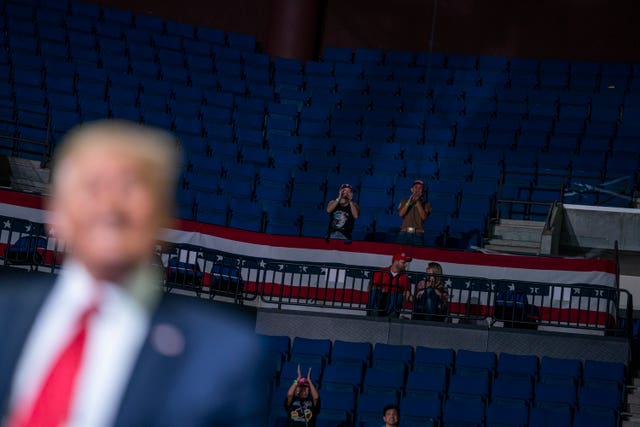 If you’re anything like me then you’ll find these images very satisfying. They seem to indicate that Trump’s popularity is fading, that his racist rhetoric and blithering nonsense doesn’t resonate against the backdrop of the Black Lives Matter movement and the ongoing pandemic. I wish I could guarantee that this was the case.

While this is a good sign and perhaps a glimpse at what’s to come in November 2020, we should also be mindful of the silent majority who don’t attend rallies and don’t pipe up on social media, but do line up at the voting booths and discreetly vote for right-wing leaning candidates. It’s a phenomena I’ve seen over and over again in the last five years or so as a UK citizen, from Brexit’s surprise victory in 2016 to the Conservative landslide earlier this year.

Liberal commentators and more progressive media outlets tend to underestimate this large sway of people that feel underrepresented by mainstream culture. I can remember so many late night talk show hosts in 2016 mocking Trump, interviewing him to boost ratings, and dismissing his presidential campaign as nothing more than a self-serving joke. Jimmy Fallon was obsessed with his hair, John Oliver urged him to run for office as a sarcastic dig, and even Hillary herself described half of his demographic as being in a ‘basket of deplorables’.

In retrospect, all this did was humanise Trump and make him seem like an outsider. Trump was positioned as a man against the media, against the progressive norm and, by extension, a man that would shake up all these condescending elitists taking up television air time. The more that we ridiculed and discredited him the more incentive there was to milk this underdog approach – which worked.

So, while I applaud this first act against his 2020 campaign, I’m also wary that this doesn’t change anything with regards to his popularity, his potential to be re-elected, or his legitimacy as a president.

It’s great that these types of protest are happening and they’re important to show how many of us want him gone from office. If we’re to get through to Trump and older voters then more Gen Z activists need to push for change through TikTok campaigns such as this one. We’ve already seen right-wing hashtags on Twitter such as ‘White Lives Matter’ being taking over by K-Pop fans to stop racist commentary from flooding the platform. Digital activism is growing and it’s exciting to consider how this new approach could have ramifications in the future.

But we should also be very mindful of self-congratulating ourselves before any meaningful democratic processes have begun. Rally tickets aren’t votes at the end of the day, and it’s important to recognise that social media is a loud hotbed of young and angry voices. They don’t necessarily represent the majority and are not a good indication of the entire political landscape, particularly when the United States has such a huge problem with getting younger people to vote at all.

Making Trump speak out to an almost empty stadium is wonderful, and there is value to these attacks on his presidential campaign. Vocalising our problems with a man so unfit for office is paramount, but it’s equally important that we don’t view this as a definite fall from grace. We’ve got a lot more to do and everyone needs to make their voices heard by voting in November.

It is the only thing that really matters when it comes down to it.