Activists around the world are protesting the country’s decision to further tighten some of the strictest abortion laws in Europe, which now confirms a near-total ban on the practice.

Outlawing the most common of the extremely limited legal grounds for terminating a pregnancy in Poland, the predominantly Catholic country’s government ruled abortion of malformed foetuses as unconstitutional on October 22. This is particularly horrifying given that the overwhelming majority (98%) of legal abortions performed in Poland last year were due to foetal defects.

With the practice now only permitted in cases of rape, incest, or if the mother’s life is at risk – a verdict decided for women in a court of law that cannot be appealed – Poland’s already inherently strict laws now amount to a near-total ban, meaning more women will likely be forced to seek procedures either illegally or abroad. Explaining the motives behind the verdict, the court said human life warranted protection in every development phase.

Among those openly criticising the ruling is Amnesty International, calling it the result of a coordinated systemic wave of attacks on women’s human rights by Polish lawmakers. ‘Legal prohibitions on abortion do not prevent abortion or reduce the rates of abortion,’ it said. ‘They serve only to damage women’s health by pushing abortions underground or forcing women to travel to foreign countries to access abortion care they need and to which they have a right.’ In the week following the announcement, not only did the decision receive immediate disapproval from Dunja Mijatović (the Council of Europe’s commissioner for Human Rights) who referred to it as ‘a sad day for women’s rights,’ but it has subsequently brought about the biggest protests in Poland since the end of the people’s republic almost three decades ago.

Defying Covid-19 restrictions to disrupt religious services (a rare instance of the public turning on the government’s ally), vandalise sacrosanct buildings, recite anti-governmental slogans, and block major roads, tens of thousands of Poles have taken to the streets in historic indignation. By breaking the longstanding social taboo that forbids challenging the Church, they are striving to shock, and send the message that well-mannered approaches are simply not effective. Chanting ‘I want choice, not terror,’ while brandishing placards emblazoned with a red lightning image that is now a key symbol of the movement, protesters are also dead-set on refusing to back down until change is implemented.

‘I will be here until the end,’ 31-year-old protester in Warsaw, Piotr Wybanski told Reuters. ‘I don’t care if it means a week, a month, three months or three years. I will protest here day after day.’ 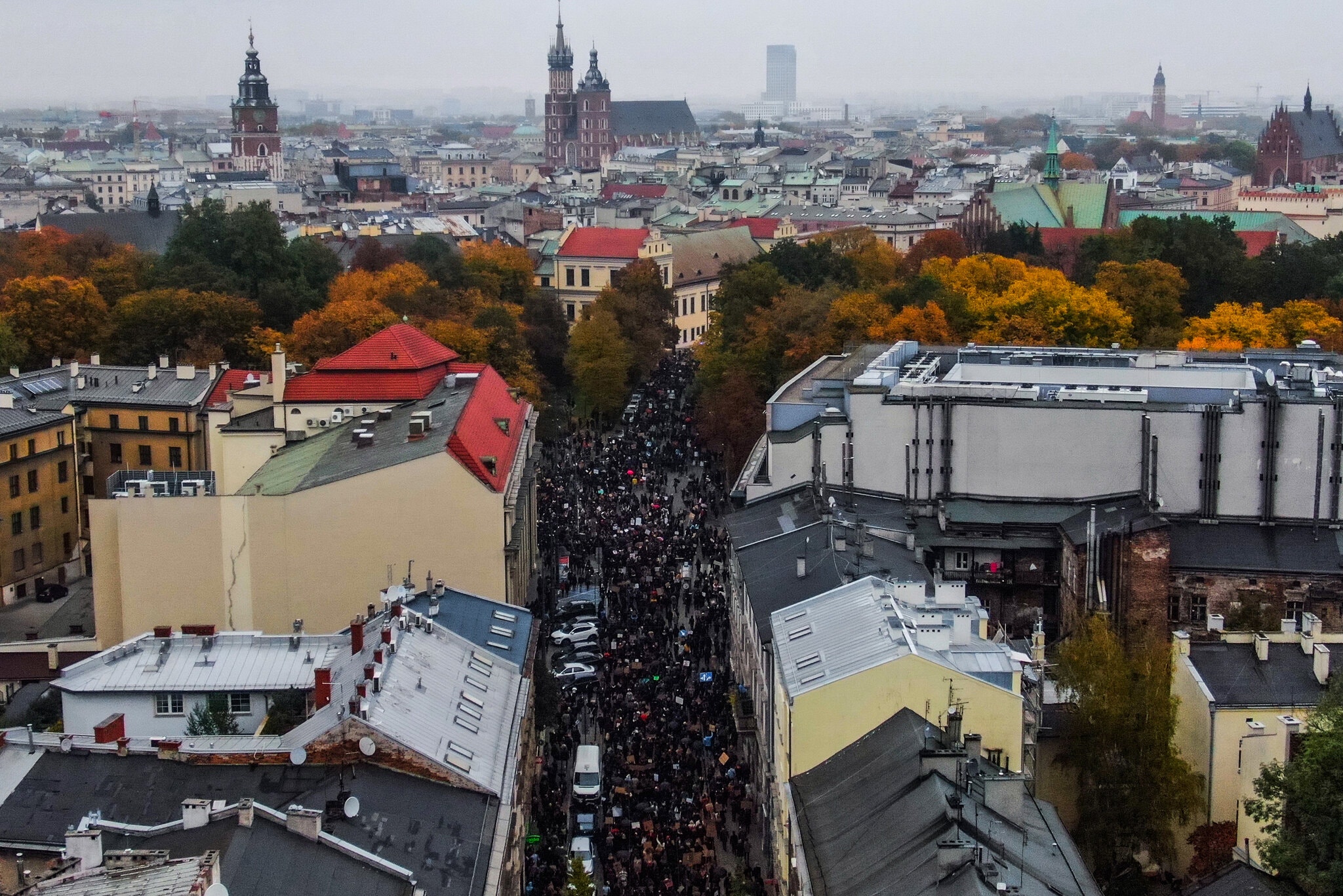 Beginning last Thursday, the demonstrations have exposed a truly conflicted society, with the traditional, Catholic values still deeply entrenched in public life now more apparent than ever. ‘I have said it many times and I have never concealed it, that abortion for so-called eugenic reasons should not be allowed in Poland,’ said President Andrzej Duda in an interview on the topic.

This comes after incumbent Duda and his Law and Justice party’s (PiS) re-election in July, ‘on a platform of conservative nationalist policies including Euroscepticism, opposition to LGBT+ rights, and justice policies that threaten democracy,’ as human rights journalist Imogen Learmonth clarifies.

In fact, for the last five years, PiS – the Catholic fundamentalist ruling party – has been aggressively pushing for this unconstitutional and radically conservative agenda, widely supported by anti-choice activists and the Polish Catholic clergy. But it was obviously rejected in light of the various grassroots campaigns that sprung up to oppose it, as well as polls proving most citizens dissented new limits – until now, that is. 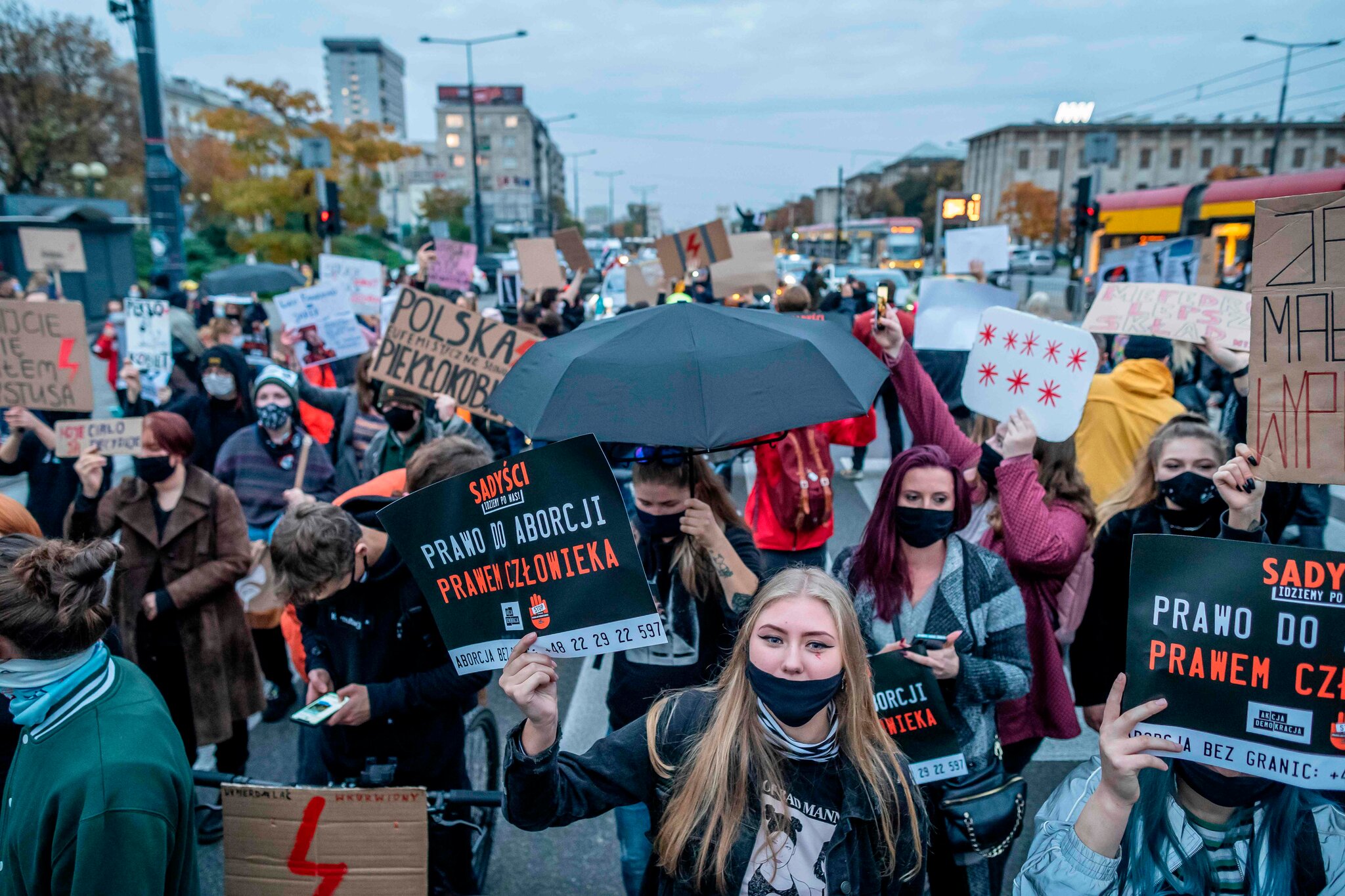 Unfortunately, wielding significant authority, the Church was successfully able to empower PiS to override any previous reluctance to tighten abortion laws. Rights groups are blaming the current crisis, accusing PiS of using the pandemic to surreptitiously enforce the ruling, despite the backlash that would unavoidably ensue. According to the New York Times, PiS has essentially erased the independence of the judiciary, using ‘subservient courts to achieve what it couldn’t do legislatively’. ‘I think they thought we wouldn’t protest in Corona,’ says Women’s Strike founder, Marta Lempart. ‘The health situation is breaking and it’s hard, everyone is scared.’ It’s what former Polish Prime Minister and head of the European People’s party Donald Tusk deems ‘political villainy,’ because there’s really no doubt about it: a ruling by a pseudo-court amidst a raging pandemic is ‘more than cynical’ as he rightly puts it. 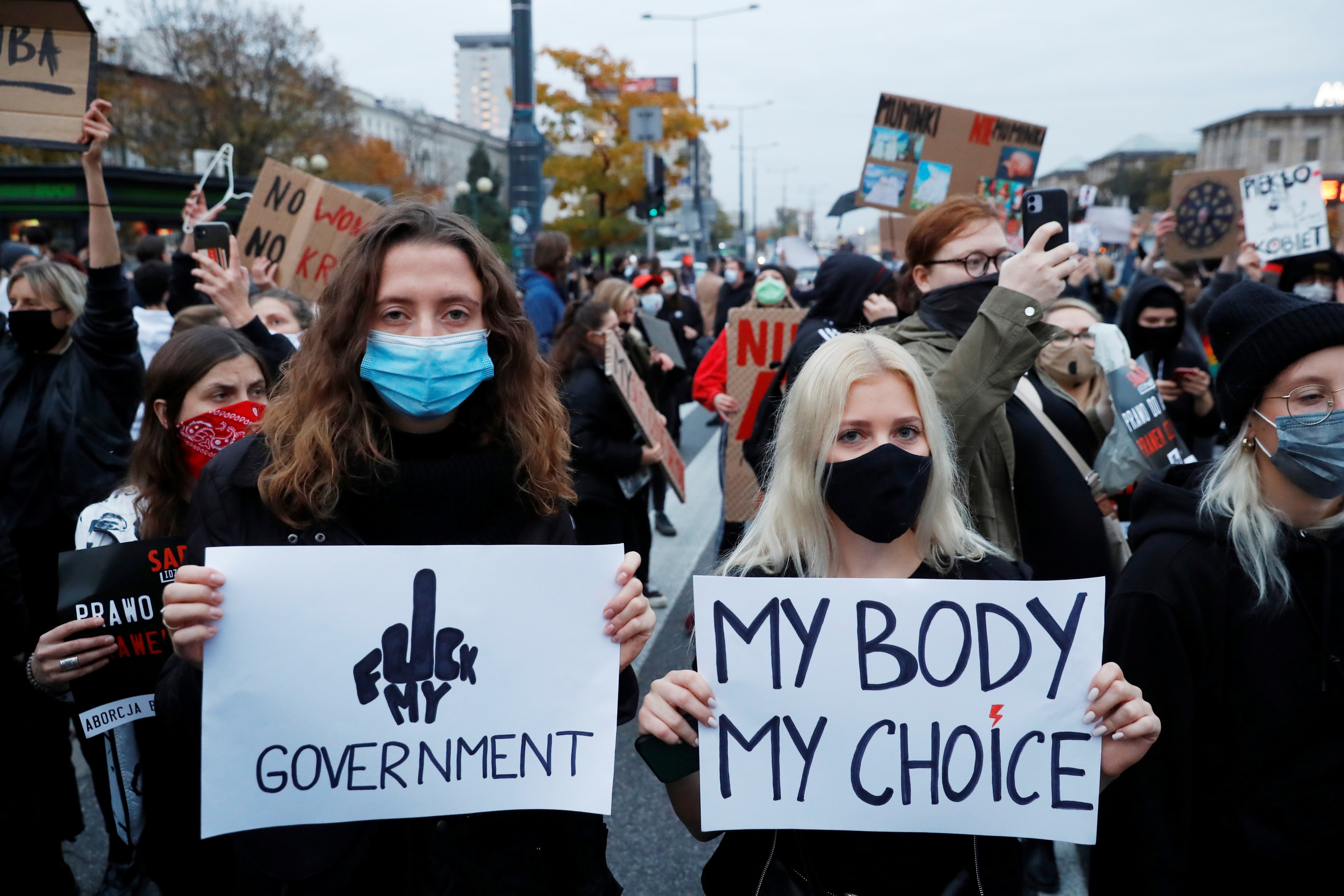 Drawing international condemnation, what started as local protests against the ruling has quickly transformed into a far-reaching furor that expresses sheer anger towards a right-wing government working to diminish the rights of women and minorities.

‘Poland has effectively slammed the door shut on legal abortion for women in the country,’ said independent human rights experts to the United Nations in response. ‘This ruling will have devastating consequences for women and adolescent girls in need of such terminations, especially those who are socio-economically disadvantaged and migrant women in irregular situations who do not have the means to go abroad for abortion services.’ Most shockingly, the decision is one that blatantly goes against legal obligations to uphold international human rights standards put in place by the 1980 CEDAW Convention. ‘These mechanisms recognise a woman’s right to access safe and legal abortion as necessary for the protection of her dignity and equality,’ add the experts.

But it isn’t just major human right’s activists standing in solidarity with Polish women and disparaging PiS’s completely draconian approach to basic female reproductive rights. It’s the world as well. Sharing photos of themselves online, women everywhere have begun showing their support, even creating a Twitter storm of hashtags such as #PiekloKobiet (‘Hell of women’), #AborcjaBezGranic (‘Abortion without borders’), and #WyrokNaKobiety (‘Sentence on women’) to ensure the message is spread far and wide.

Although Poland’s abortion ruling will not end access, it might as well have. The decision will in no way reduce demand for the procedure nor will it deter women from taking covert measures to obtain it – restrictive abortion laws only lead to a surge in how many occur in secret and unsafe conditions.

Hope lies in the fact that so many are fighting against the verdict, but until the top court revokes the totally unjustified ban on almost all terminations, Polish women must rely on coalitions like Abortion Without Borders, the phone number for which protesters have begun painting on walls and even churches. Launched last year, it helps Poles receive abortions in other countries, directing them to ‘member groups’ depending on their ability to travel, medical circumstances, and pregnancy. Meanwhile, here are some donation links, resources to share actions you can take to make a difference.