Are we really so desperate in our fight against the climate crisis that eco-friendly materials made from fish semen and the human body are being presented as viable solutions?

Don’t get me wrong, I’m all for finding sustainable alternatives to products we know are detrimentally impacting our environment on a regular basis, but when reading up on some of the latest advances in the field of eco-friendly materials this morning, I can’t deny having felt rather uncomfortable.

For starters, as researchers look for ways to reduce our dangerous reliance on plastic, an unlikely substance has turned out to be a key player in its replacement.

And no, I’m not talking about seaweed, bamboo, or mushrooms, but sperm.

That’s right, in a paper published last month, a team of scientists in China detailed how they’ve successfully developed a bioplastic made with DNA from fish semen. 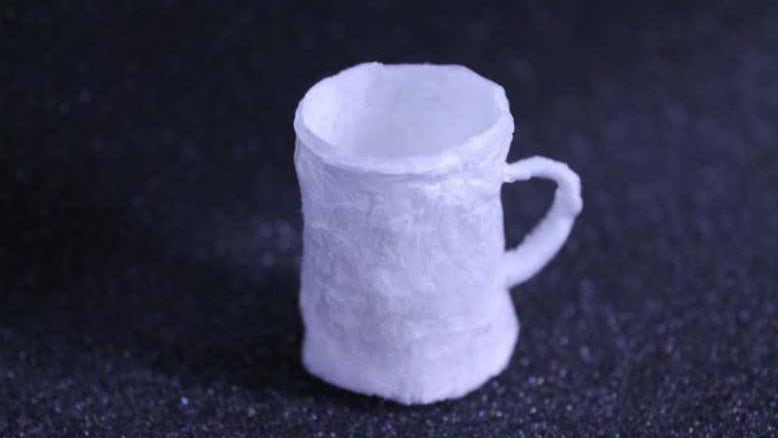 How? By dissolving strands of the genetic material in water containing ionomers (a chemical found in adhesives and vegetable oil) to create a gel that can be moulded into various shapes and then freeze-dried to remove all moisture.

The innovative process, called ‘aqua-welding,’ generates 97 per cent less carbon emissions that manufacturing polystyrene plastics and the recyclable end product is reportedly more environmentally sustainable than every type of plastic we currently know of.

To prove that it works, the scientists have so far constructed a small white mug and some puzzle pieces that can be broken down either with a DNA-digesting enzyme or by placing them in water.

The latter converts the items into a soft gel, which means they can be fashioned into something entirely different. 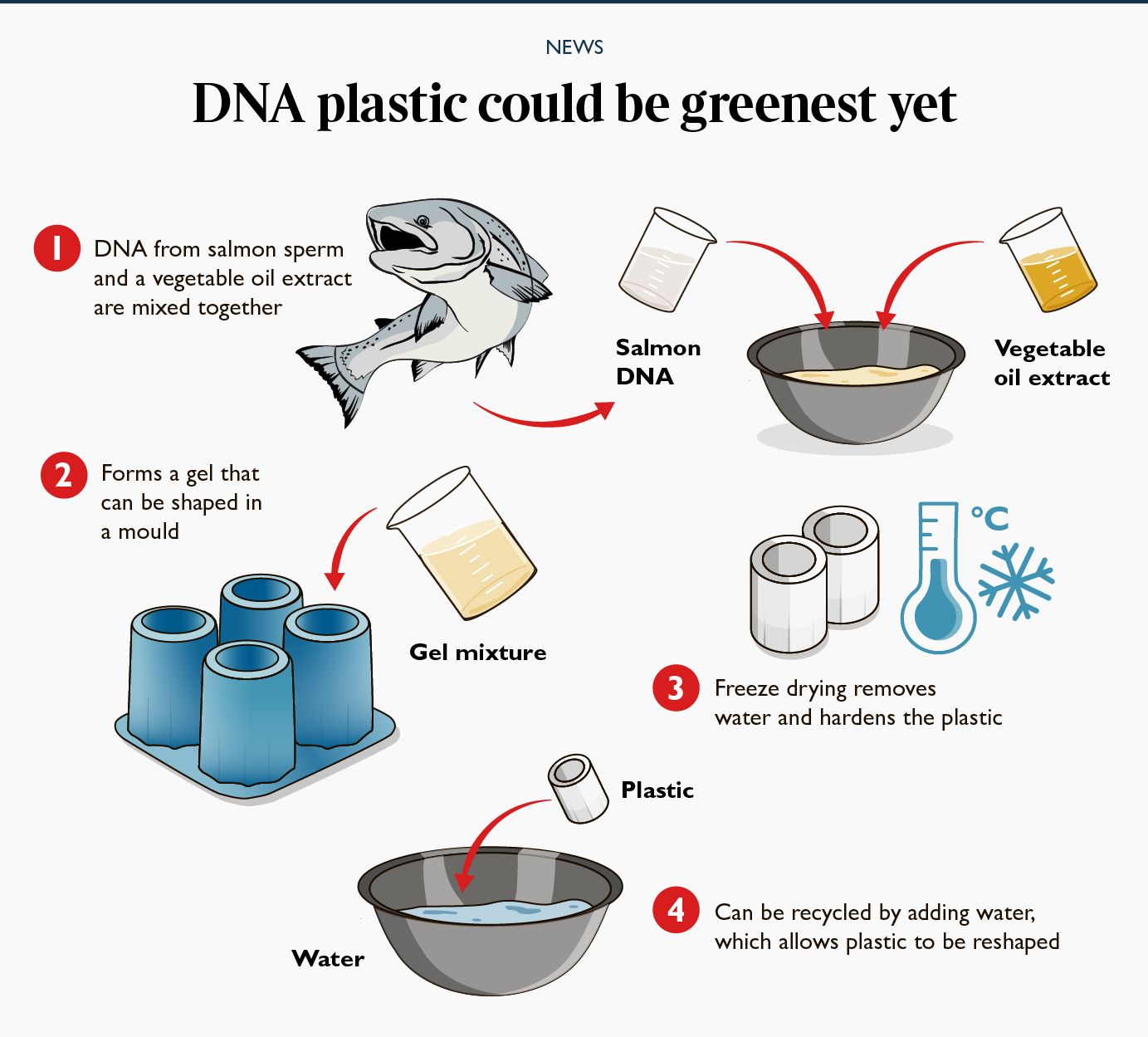 While this closed-loop system has its limitations, what’s promising is the abundance of DNA as a raw material. With an estimated 50 billion tonnes of it on Earth, it probably won’t be long then before we see sperm plastic (as well as agricultural plant waste, fruit, and bacteria plastic) hit the shelves.

On this note, as unusual as the concept first seemed, I’d say it’s definitely a viable solution. One arguably nowhere near as stomach-churning as designers using human hair and sweat to produce textiles.

The new trend, fronted by Zsofia Kollar and her company Human Material Loop, is seeking to tackle fashion’s concerning waste problem by turning the 72 million kg of hair that’s thrown out by European salons annually – ending up in landfills, solid waste streams, and choking drainage systems – into clothes.

‘Human hair is a globally available material unlike cotton or wool which can only be sold in a specific area,’ she explains, urging us to consider the paradox of wasting our own cruelty-free hair (which is rich in keratin protein fibres) while wearing environmentally-unfriendly sheep or alpaca. Seaweed film could be the future of single use plastic packaging ‘Additionally, while animal hair needs to be treated with chemicals to remove the blood and faeces that end up in our water, human hair is pretty much ready to go. It only needs to be steamed.’

To date, Kollar has released one jumper prototype called ‘Dutch Blonde,’ made of 100% per cent recycled human hair collected in the Netherlands and spun into yarn in Italy.

Any hair that’s too short to use is repurposed as a natural fertiliser, providing nitrogen for plants when it decomposes.

‘In the past, people have used all kinds of materials around them. For example, ropes made of hair were a very common thing. But nowadays, we seem to have forgotten that human hair is also a natural material,’ adds Kollar. 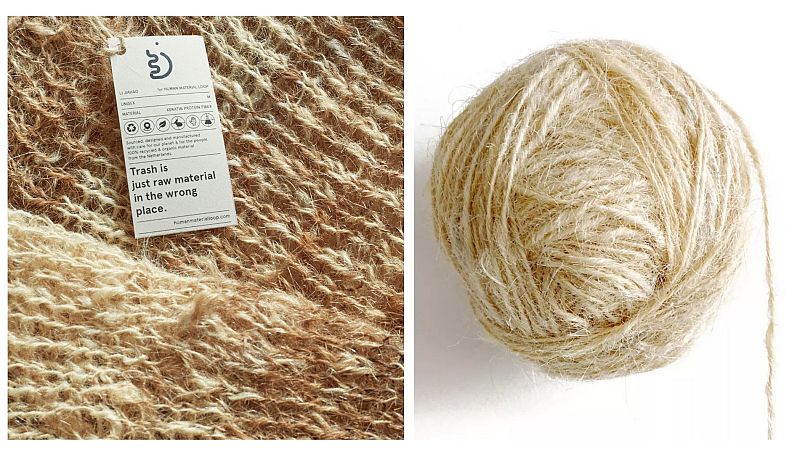 ‘So I am trying to help people become more open-minded to different materials again and hopefully in the future, wearing a jumper made of human hair will be normal.’

Alongside this, Alice Potts has been designing garments encrusted in crystals made from human perspiration.

She does so by asking athletes to don special gymwear to exercise and sweat in, then once this becomes embedded in the material, she scrapes it, wrings it out into a container, and collects any excess liquid using microfibre towels.

That’s when she can begin the crystallisation process. ‘Everyone is unique, and so is the sweat we produce, encapsulating our health, wellbeing and identity,’ she says. ‘I’m keen to develop this idea and use it to explore sustainable processes within fashion.’

Although both meet the circularity criteria, I must admit I find them a little harder to get on board with, and am left questioning whether we are so desperate in our fight to prevent climate change that eco-friendly materials made from the human body are all we can come up with.

Yes, clothes made from hair and sweat are progressive, not to mention inherently creative, but what will really make a difference (and I’ve said it time and time again) is continuing to advocate against mass consumption and overproduction.

Until then, I guess I’ll have to work on my feelings of disgust.