The hugely popular video-sharing platform has introduced a ‘creator diversity council’ after receiving criticism for suppressing non-white content with its complex algorithms.

After a string of controversies about racial equality on the app, TikTok has formally apologised to its Black users. The company, which recently came under fire for appearing to hide posts with George Floyd and BLM hashtags, has accepted responsibility for failing Black content creators by censoring their voices.

Unfortunately, this is just the latest in a series of criticisms over the way TikTok supports people of colour – and other minorities – on the platform. In the past, it’s admitted to limiting videos by disabled, queer, and overweight creators and has been identified as a hub for racism, with little to no regulations controlling discriminatory language.

‘As time went on after joining I noticed injustices,’ says 16-year-old creator, Iman Tura. ‘Racism on the app is blatant. The censorship of people speaking out against injustice paired with the allowance of white supremacists to have platforms is unacceptable and needs to change.’

TikTok’s inability to moderate the kind of people using the app has since been dealt with, but only now has it begun to address the blatant issues of racism that still continue to surface.

‘TikTok does nothing for Black creators that are attacked daily because of the colour of their skin but protects the racist content even when reported,’ adds Tura. ‘That just shows how much the way community guidelines implementation needs to change.’ 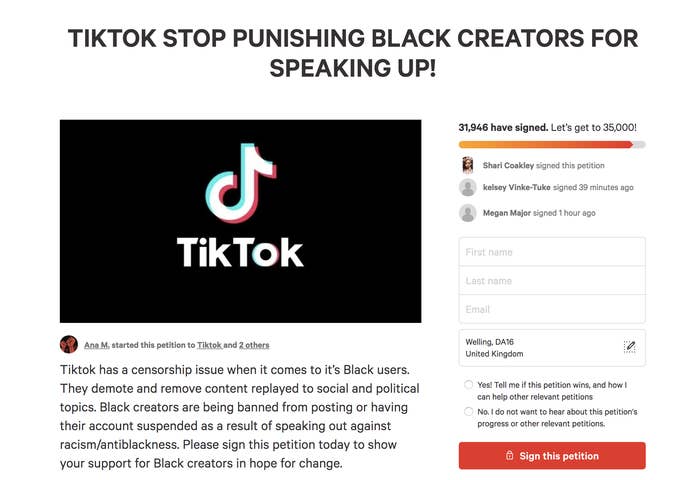 As the social media landscape transforms alongside conversations sparked by recent cases of police brutality in the US, it’s unsurprising that many have flooded to the hugely popular platform to participate in these discussions. However, this proved rather complicated after a supposed ‘technical glitch,’ that made it look as though anything uploaded under the related tags had zero views. With TikTok somehow restricting search results, those striving to spread awareness about the movement were going unheard.

Amidst outcries that the company was deliberately suppressing Black voices, TikTok laid out a series of actions that it now plans to take in order to rectify this. One of these steps includes launching a ‘creator diversity council’ aimed at ‘recognising and uplifting the voices driving culture, creativity, and important conversations on the platform,’ according to a blogpost. In addition, it will build out a new ‘user-friendly’ appeals process, reassess its moderation strategies, and develop a creator portal designed specifically to expand communities.

‘We appreciate being held accountable,’ continues the post. ‘We know that getting to a place of trust will take work, but we are dedicated to doing our part as we continue to foster a space where everyone is seen and heard.’ How TikTok finally broke the mainstream

On a more positive note (and somewhat ironically), as a result of the app’s reckoning, TikTok has now become a teaching tool for Black creators who are using their videos to educate viewers. This new brand of creatives have made it their mission to fill the gaps in what is currently a very whitewashed curriculum. With ever-growing followings, they readily acknowledge TikTok’s potential to be a greatly successful point of activism, the viral nature of the app invaluable when it comes to making real change.

‘When I made my first video on anything racial justice-wise, I had maybe like 200 followers,’ says 18-year-old Kei. ‘Now with over 40,000 and counting, I almost exclusively use my platform to speak on US-related matters, such as slavery, the school to prison pipeline and the flag code.’

While the work is nowhere near done, TikTok’s apology is a noticeable pivot from its previous communications refuting and denying any claims that community guidelines weren’t being applied fairly to all users. And, after announcing it has pledged $3 million to nonprofit organisations supporting the black community as well as an additional $1 million ‘toward fighting racial injustice and equality’, the platform seems genuinely dedicated to the cause.

Although it’s yet to be seen, it certainly looks like TikTok has a more diverse and respectful future ahead. In the meantime, here are some of the Black creators leading the way.