Activists in China are taking it upon themselves to install free ‘sanitary support boxes’ in university campuses across the nation in new ‘Stand by Her’ initiative.

It’s not often as a journalist you get to report on an upcoming woke initiative in China. But since October, a grassroots campaign to provide free sanitary products to Chinese women and to end stigma surrounding menstruation has taken off in a meaningful and uplifting way.

The campaign, which has been dubbed Stand by Her by its adoptive leader Jiang Jingjing (widely known under the pen name Liang Yu), has seen boxes and bags of individual wrapped sanitary pads placed outside bathrooms in at least 338 schools and college across China in just over a month. The so-called ‘sanitary pad support boxes’ each carry a version of the same instruction – ‘take one, then put one back later. Stop period shaming.’ 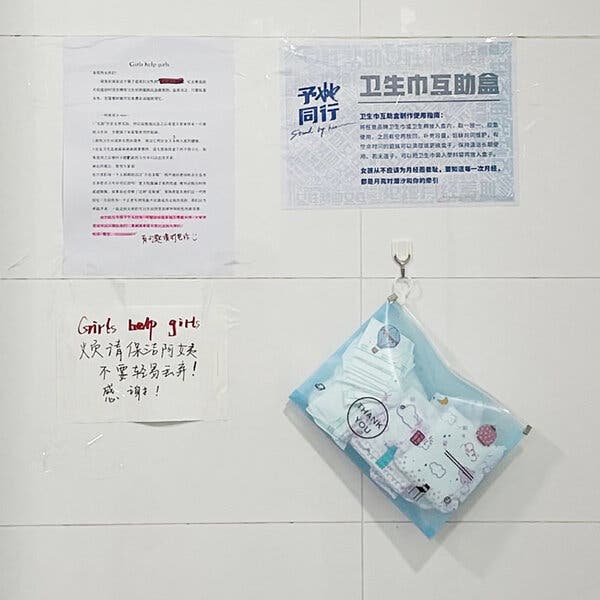 There’s been a meaningful uptick in global attention towards the ubiquitous issue of period poverty in the last half-decade, as thred has reported. The UN defines period poverty as the financial struggle low-income women and girls face to afford menstrual products – a necessity in the lives of all persons with wombs yet one that rarely receives any government subsidies and is often taxed as a luxury item.

Discussions around period poverty in China have been picking up steam since March, when female health workers on the frontline of the coronavirus outbreak complained that sanitary products weren’t being provided for them or classified by the health authorities as necessary items.

It was then that Jiang Jinjing rose to prominence as the de-facto face of the fight against period discrimination in China when she mobilised deliveries of sanitary pads to hospitals in Wuhan.

The discussion around stigmatising menstruation in oftentimes culturally traditionalist China has continued since then until last month an unidentified teacher posted a picture on popular Chinese social media platform Weibo of a free sanitary product box she’d placed outside her classroom. Ms. Jiang widely shared the image, encouraging others to do the same.

According to female students who spoke to The Guardian, the support boxes then began cropping up everywhere, with pictures of them plastered around social media.

After giving the movement its name, Jinjiang set about using this momentum to begin a crowdfunding campaign. Since October, she’s raised USD $126,000 to send sanitary products to teenagers in rural China and to fund sex education programs.

Speaking to The New York Times, Fiona Fei, a 23-year-old graduate student at Guangxi University in southern China, stated that ‘a lot of people around me feel shame [regarding their periods]… and so we want to break through this shame together.’

A study published in July by the Maple Women’s Psychological Counseling Center in Beijing found that nearly 70% of respondents said that they tried to hide the sanitary pads they carry around, and more than 61% used euphemisms for their period.

Ms. Jiang said in a post online: ‘The process of having loud and frequent discussions will remove the stigma from menstruation.’ She also noted that ‘pads’ and ‘periods,’ once taboo words in China, were being more commonly discussed in the country.

‘This already is a huge breakthrough and milestone,’ she said. There are more types of poverty than you know