The social media giant is cracking down on videos that promote starvation and anorexia following reports that potentially harmful pro-weight-loss accounts are still available in search results.

In light of recent findings by The Guardian that harmful pro-weight-loss accounts remain easily searchable despite previous measures taken by the company to prohibit corresponding advertising, it’s a crucial moment for the app, particularly given that 60% of its users are between the ages of 16 and 24. For an obviously impressionable demographic, videos of this nature can be incredibly damaging, especially in the aftermath of lockdown during which challenging relationships with food and diet were exacerbated tenfold.

Partly to blame is TikTok’s concerningly specific algorithm which, though commendable for its uniqueness to each and every one of us endlessly scrolling down the For You Page (a feature that significantly sets it apart from its competitors), can be dangerous for users with a tendency to watch triggering content. Rather than actively diverting them away from this, TikTok automatically promotes a slew of similar videos instead, making it virtually impossible to avoid encountering unhealthy themes in the – often excessive – time spent trawling through the addictive FYP.

i left 2013 pro-ana tumblr only for tiktok to remind me of thinspo 😾 pic.twitter.com/hlfdLaBa7U

‘It takes little more than 30 seconds to find a pro-eating disorder account on TikTok and, once a user is following the right people, their For You page will quickly be flooded with content from similar users,’ says Ysabel Gerrard, a lecturer in digital media and society at the University of Sheffield. ‘This is because TikTok is essentially designed to show you what it thinks you want to see.’

However, it seems as though the larger issue lies in the company’s apparent inability to stop its users from getting around restrictions by using deliberate variants of well-known terms or slight misspellings. While TikTok has been working hard to block hashtags such as ‘proana’ and ‘thinspo,’ typing ‘proanotok’ and ‘thinspooo’ into the search bar will immediately yield results, bypassing the censors far too effortlessly. 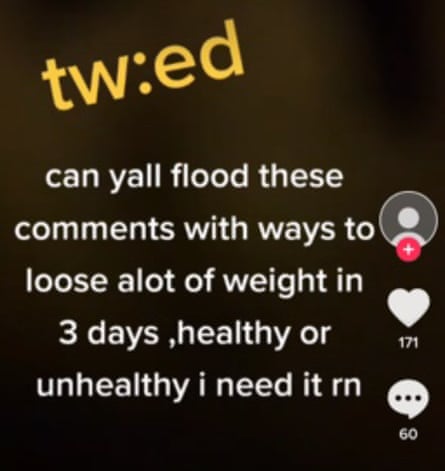 Of the numerous accounts that appear, one shows messages from a girl asking for tips on how to lose a lot of weight quickly ‘in a healthy or unhealthy way,’ another is rife with suggestions of ‘low calorie safe foods for when you don’t want to purge,’ and some even go as far as warning ‘if you don’t like stuff about starving leave please’ directly in their bios. And, besides the usual before and afters and calorie counting videos, TikTok is equally riddled with content injecting the same dark, ‘meme-centric’ humour frequently found on the likes of Twitter, where self-deprecating jokes are commonplace.

‘As soon as this issue was brought to our attention, we took action banning the accounts and removing the content that violated those guidelines, as well as banning particular search terms,’ said a spokesperson. ‘As content changes, we continue to work with expert partners, update our technology and review our processes to ensure we can respond to emerging and new harmful activities.’ 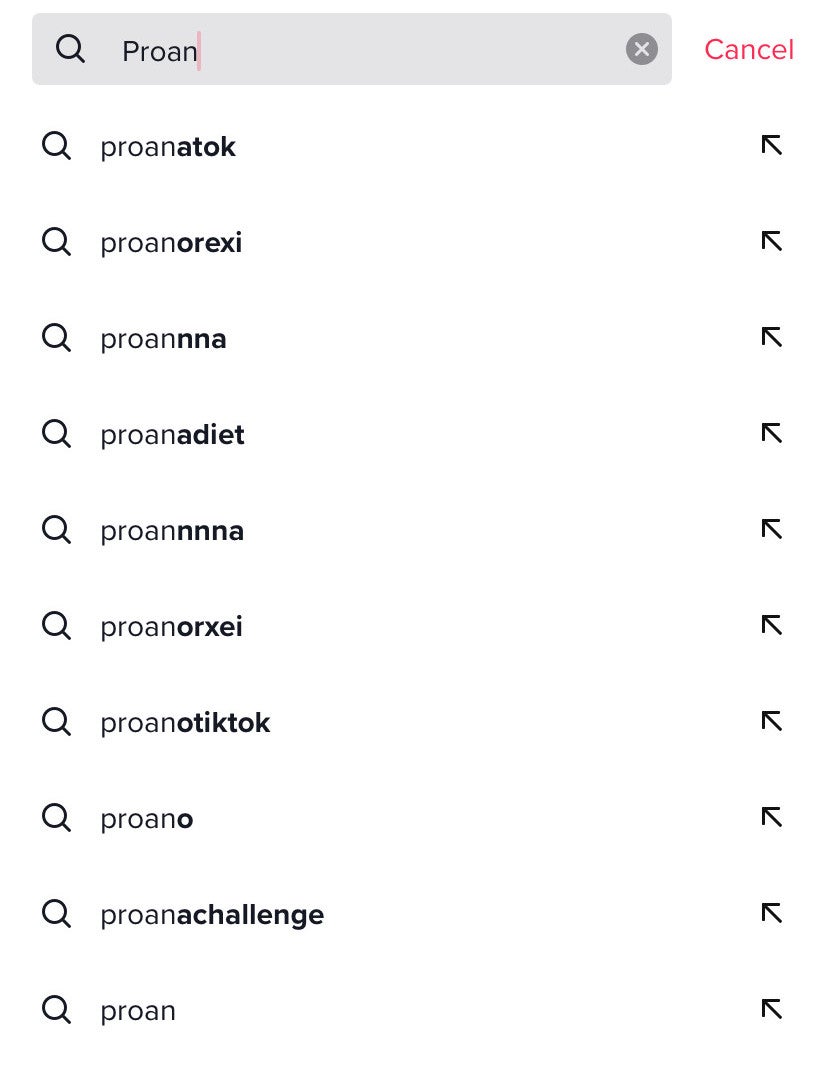 Evidently, TikTok has since banned such accounts, flagging them for violating community guidelines and posting content that promotes eating habits likely to cause health problems. But others have, of course, surfaced in their place. With the problem still so prolific, TikTok is now being urged to do more and impose stricter regulations to combat what Gerrard calls ‘a disturbing level of inaction.’

At present, unlike other platforms such as Instagram and Tumblr, TikTok doesn’t refer users to mental health charities where they can access help, nor does it send resources to people searching pro-ED terms. Alternatively, it either pulls up the rulebook for user behaviour, or simply says ‘no results found.’

For a platform that’s grown so exponentially – recently reaching the milestone of half a billion users just four years after its 2016 launch – it’s certainly shocking that only now has TikTok begun to address this, albeit somewhat inevitable given that it relies on users to generate their own content.

Yes, TikTok is still a relatively young app and will learn vital lessons as it continues to develop, but that doesn’t deter from the fact that it’s 2020 and one thing is clear. The app must take responsibility in moderating content with the potential to endanger the health of its overwhelmingly young user base because dropping the ball like this cannot be attributed to growing pains alone.