The ever popular and lucrative business of Esports is about to head to the next level, sealed by a futuristic $500m stadium build in Toronto.

Esports has burst onto the mainstream in recent years, blossoming from a subset of sports culture into a full blown industry in its own right. Quite frankly, parents now have no grounds to berate their kids for choosing gaming over outdoor activities.

With gaming officially recognised as the biggest entertainment industry in the world, revenue projections for Esports are set to surpass $1 billion for the first time this year. As much as 69% of this rapid growth can be attributed to sponsorships, merchandise, and advertising, but the industry appears to now be turning its attention to bolstering live ticket sales.

At the head of this business realignment is the blueprint for an incredible purpose-built arena dedicated to hosting Esports events in Toronto.

This week, OverActive Media – the ownership group behind Esports teams Toronto Defiant and Toronto Ultra – announced its plans to erect the $500 million facility on the Exhibition Place grounds in Toronto, Canada. Just take a second to marvel at that design… eat your heart out Jorn Utzon.

With hopes to light up a four acre plot on Lake Shore Boulevard before 2025, the currently unnamed venue will provide Toronto based outfits a place to play ‘home games’ in front of its fans during the active season. While Toronto players are honing their skills off the clock, the city will also utilise the space for music gigs, theatre shows, product launches, and award ceremonies. Representing the first sports or entertainment venue the city has seen since the BMO Field in 2007, this 7000 seater arena will tie Hong Kong’s Chongqing Zhongxian Esports Stadium as the largest capacity arena the sport has seen thus far. 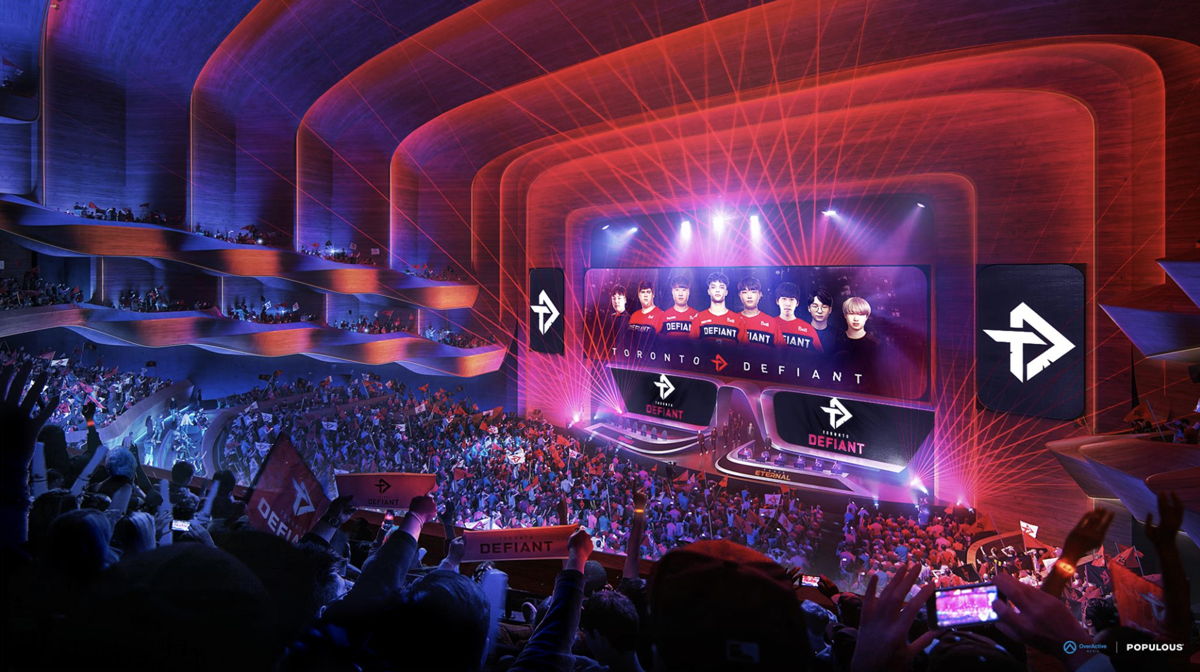 ‘It has always been our intention to develop a venue and hosting strategy and to build a facility that could not only serve as an iconic home for our two franchises, but ultimately emerge as a global hub for major international Esport events,’ said OverActive president and CEO Chris Overholt in a statement.

‘We are already in active discussions to attract some of the biggest Esport events in the world.’

Provided all formalities are ticked off by city officials, which Overholt claims is all but certain at this stage, the blueprints will be handed over to a modern design firm called Populous, which has also worked on big projects including the London Olympics, Super Bowl, and Yankee Stadium.

With Esports resigned to remote online events for another season, it’s promising to see that industry figureheads are planning to bring the physical spectacle back to life when the pandemic subsides, and on a grander scale than ever before too.

At the rate the sport is growing, within the next decade we could be seeing gaming buffs donning their hometown’s colours and travelling home and away to cheer the best gamers our areas have to offer. The co-founder of Google is plotting the build of a huge relief aid zeppelin. Powered by the world’s largest mobile hydrogen fuel cell, it will be eco-friendly and aim to deliver humanitarian aid in hard to reach locations. Google co-founder Sergey Brin is plotting something huge (in scale and scope) for the future of both eco-friendly aviation and disaster relief aid. The billionaire worth a cool $88 billion USD has long... Thanks to Covid-19, finding seasonal workers to harvest the globe’s many orchards has become a real problem. However, farmers have found a viable solution in the form of autonomous fruit picking robots. Considering that 800 million tonnes of fruit are produced globally each year, harvesting it seasonally across the world’s many orchards requires an all hands on deck approach. When it comes to the produce trade, a farm owner’s profitability often... Dispo lets users take pictures through disposable camera filters and locks them for viewing until 9am the next day, imitating the vintage experiences of 90s photographers. You may know David Dobrik for his YouTube vlogs and Madison Beer antics, but he’s also a savvy venture capitalist and tech innovator. His invite-only, ‘in the moment’ vintage photography app Dispo launched in beta last year, generating significant buzz with his sizeable YouTube...