A biomedical start-up is currently developing a wearable Bluetooth device that administers ketamine like an insulin pump to fight opioid addiction and treat chronic pain.

In light of new findings that psychedelic drugs could transform mental health, scientists and researchers alike are persisting with their dedication to change our minds about the revolutionary medical potential of these once heavily frowned-upon compounds. Simply put, the benefits of these substances are getting progressively harder to ignore and every day it becomes more and more evident how game-changing it would be to rebrand and integrate them into mainstream healthcare systems.

With stigma still firmly attached however, it’ll be a long time before we see widespread administration of LSD, psylocibin, DMT, and even MDMA (among others) to patients seeking treatment for anxiety, addiction, and depression.

But there does exist one illicit substance, despite its growing popularity amongst recreational drug-users who enjoy powerful hallucinations and out-of-body experiences, that appears to be making waves as a method of pain relief. This is alongside microdoses of acid, which have been discovered to be a remarkable alternative painkiller to morphine.

Arguably more accepted within a professional sphere given its clinical properties and the fact it’s been utilised as a rapidly acting, nonbarbiturate general anaesthetic since the 1970s, ketamine has recently emerged as a ground-breaking means of treating acute postoperative pain following surgeries and other medical procedures. And amid a great deal of media hype surrounding the dissociative psychedelic as a breakthrough treatment for depression, using it to specifically target pain management is unique.

This is because not only is pain very challenging to treat, but ketamine used in this radical way has the additional potential to combat the US opioid crisis. With opiate overdoses claiming 50,042 lives in 2019 alone (as reported by the CDC which also states that more than 40% of these deaths were linked to oxycontin prescriptions), it’s a harrowing epidemic that’s been raging for two decades too long and continues to show no signs of abating.

‘One of the most fascinating differences between ketamine and opioids is their effect on memory, which plays a huge role in managing pain and addiction,’ explains director of the National Institute on Drug Abuse, Dr. Nora Volkow. ‘Pain is a learned experience. Ketamine creates a psychological distance from pain so that it’s a signal, but not necessarily having a grip on your consciousness, while opioids accelerate the development of chronic pain.’ 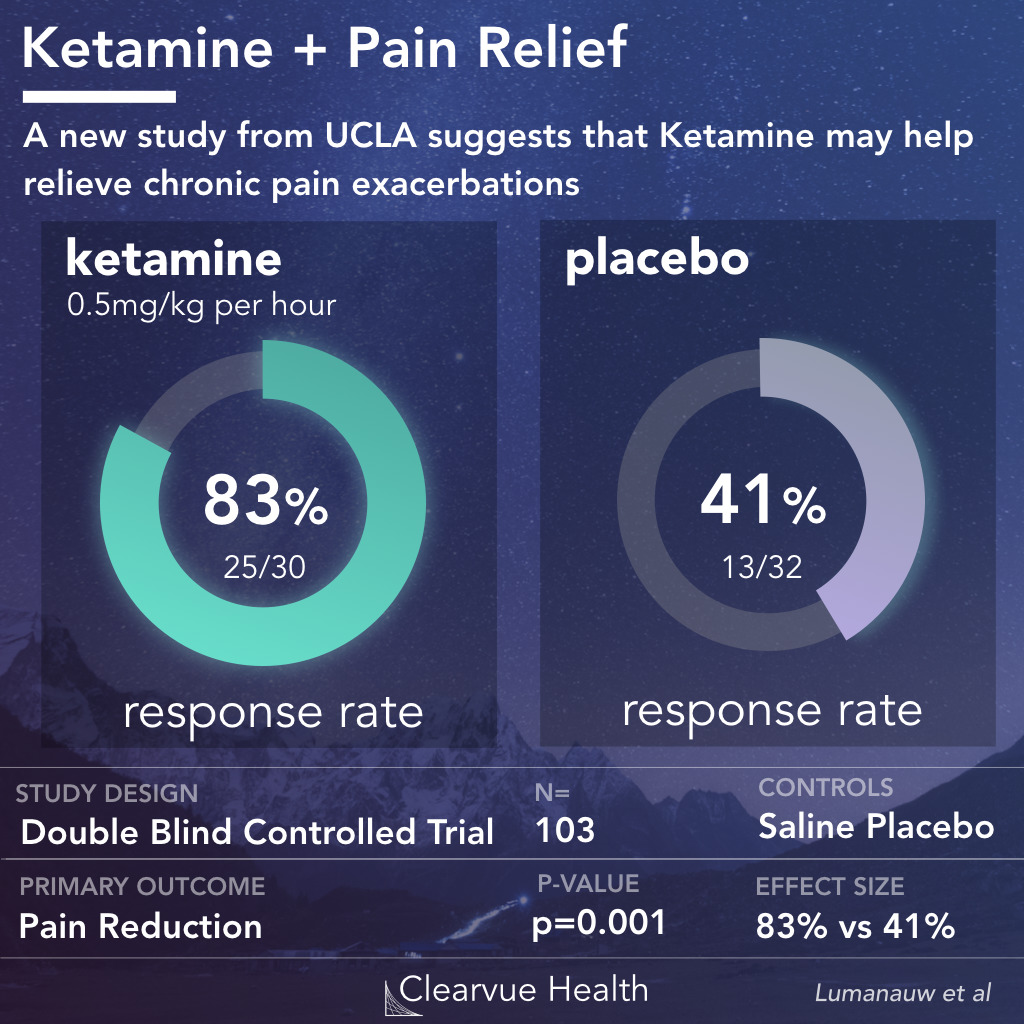 Enter ‘wearable ketamine.’ Though the concept seems outrageous – and is certainly a good while-off from hitting the market – it could unravel yet another layer of this extraordinary drug.

‘Post-operative pain is one of the leading drivers in the opioid crisis,’ says Gregg Peterson, CEO of Bexson, the biomedical start-up that came up with this idea. ‘If you want to move the needle on opioid addiction in America you need to provide a new, non-opioid therapy that patients can go home with that has opioid-level efficacy and a lower abuse potential. We think our product will be able to do that.’ In theory, ‘wearable ketamine’ is a futuristic-sounding device one could liken to an insulin pump that you attach to your stomach and control via Bluetooth, complete with anti-tampering and anti-abuse technologies. In the process of manufacturing it, Peterson outlines that the device will contain a disposable cartridge filled with a ‘proprietary formulation of liquid ketamine with an increased bioavailability and a higher pH level.’

This signifies it can be subcutaneously injected through a minute needle into the layer of fat between skin and muscle which is far less painful than traditional intravenous injections and though it’s absorbed into the bloodstream at a slower rate, much more effective than intranasal administration.

Over a 24-hour period, the cartridge (each holding between 70-200 milligrams of ketamine in total) will gradually release a low dose of around 4mg per hour, the effects of which Bexson deems no more intense than drinking a glass of wine. So no, tripping won’t be involved. ‘We know it’s safe and we know it works, which is very rare for a biotech at this stage,’ adds Peterson.

Currently in the middle of a $4 million Series A funding round, the device is still in pre-clinical development, but with animal testing already taking place and human trials due to start as early as next January, Peterson believes the FDA may approve wearable ketamine by 2026.

‘Bexson is interesting because a lot of companies [in the psychedelics space] are focusing on mental health, but they are one of the few companies looking at pain management,’ says Peterson. ‘You have a huge addressable market, which I am excited about from a public health standpoint, and the prevailing treatment options are falling short and leading to bad patient outcomes.’

Wearable ketamine seems ambitious, but it could certainly make a significant dent on the public health crisis of opioid addiction and according to Forbes, if successful, Bexson’s unique ketamine formulation and delivery device could claim a piece of the $12 billion annual post-op pain market.

I look forward to seeing how this pans out.