New research has uncovered a ‘parallel pandemic’ of unexplained tics in young people, the sudden onset of which is likely to do with their social media use.

It’s no surprise that the pandemic – bringing global devastation, millions of deaths, economic strife, and unprecedented curbs on social interaction – has had a significant impact on people’s mental health.

Of those currently experiencing anxiety and depression related to COVID-19, over half of them are Gen Z, according to a study which found 63% of 18 to 24-year-olds to be suffering as a direct result of the crisis.

This is because young people are especially vulnerable to psychological distress and often have an intense need to socialise during adolescence.

Filling this gap during the last 18 months, TikTok emerged in the earliest days of COVID-19 as Gen Z’s knight in shining armour, ensuring we were more connected than ever before.

However, alongside our newfound pandemic-induced addiction, a troubling trend arose and, no, it doesn’t involve dancing, #fitspo, or the Olympics.

A report, published recently by the International Parkinson and Movement Disorder Society, has uncovered that tic-like behaviours among Gen Z have been on the up since lockdowns began.

Quite drastically in fact, with referrals for these rapid onset conditions rising from 1-5% of total cases pre-COVID-19 to 20-35% of them currently.

Of the 20 patients studied, eight had complex vocalisations consisting of the repetition of random words or phrases, 11 engaged in the repetition of curse words, or obscene, offensive, and derogatory statements, and 14 had complex behaviours such as hitting or banging parts of their bodies, other people, or objects.

Most unpredictably, researchers conducting the study believe an increased exposure to influencers on social media with Tourette’s syndrome is to blame.

‘There have been striking commonalities in the phenomenology of these tic-like behaviours observed across our centres in Canada, the United States, the United Kingdom, Germany, and Australia,’ they explain.

‘In some cases, the patients specifically identified an association between these media exposures and the onset of symptoms. This exposure to tics or tic-like behaviours is a plausible trigger for the behaviours observed in at least some of these patients, based on a disease modelling mechanism.’ Opinion — Lockdown didn’t hinder my eating disorder, it helped it While positive representations of Tourettes on TikTok have helped to normalise a neurological condition that affects an estimated 300,000 people in the UK, the influx of such content is bringing about what medical experts deem the equivalent of ‘dancing mania.’ 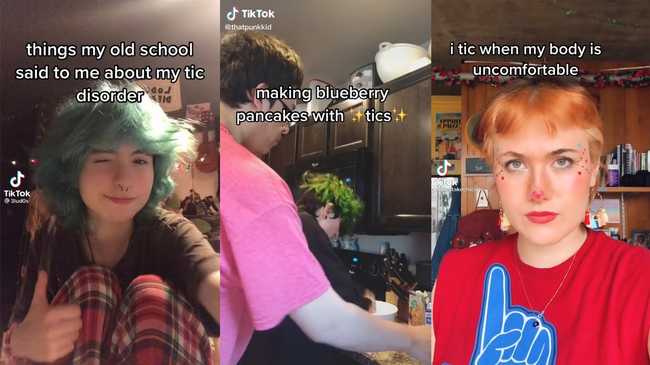 A social phenomenon that occurred in the Middle Ages, it’s thought to have been triggered by mass hysteria which, in the right group of people, can spread like a virus.

In 2021, this is known as ‘mass social media-induced illness,’ or MSMI.

‘Tics are prone to be mimicked and can be ‘caught’ from one person to another in high-stress environments,’ continues the report. ‘This is why social media poses a new-age problem.’

Yet it’s still impossible to pin the blame entirely on TikTok. Namely because one of the main causes for Tourettes is anxiety – and we aren’t exactly living in normal times right now.

‘There may be a cohort of people who are very suggestible,’ says Uttom Chowdhury, who works in an NHS community clinic focused on tics and Tourettes.

‘In the same way there was hysteria in different centuries, there’s outbreaks of tics. We don’t know enough, so try to always keep an open mind.’ An internal presentation outlining two years of research on the psychological effects of Instagram has been leaked. The reports conflict with company representative’s public narratives of the platform. By now, we’re all aware of the potentially negative consequences of social media use, whether that knowledge was obtained through our own personal afflictions, or endless news stories and academic reports on the subject. The only people who are totally unwilling to admit...