Amid growing acceptance of hallucinogens including LSD, magic mushrooms, and DMT as treatment for mental illnesses, new data shows the highest rates of psychedelic use among students since 1982.

Disclaimer: all content within this article is provided for general information only, and we are by no means endorsing the use of these substances in uncontrolled settings.

In light of new findings that psychedelic drugs could transform mental health, scientists and researchers alike are persisting with their dedication to change our minds about the revolutionary medical potential of these once heavily frowned-upon compounds.

Simply put, the benefits of these substances are getting progressively harder to ignore and every day it becomes more and more evident how game-changing it would be to rebrand and integrate them into mainstream healthcare systems.

With the global market growing as rapidly as it currently is (projected to reach $10.75bn by 2027), it’s no surprise that fresh data from the annual Monitoring the Future survey has uncovered a boom in the recreational use of LSD, magic mushrooms, and DMT (to name a few) among Gen Z.

The uptick comes during an era where psychedelics, as well as ketamine and MDMA, are being trialled and prescribed to treat a range of conditions such as depression and PTSD. The red tape restricting them from scientific integration is gradually beginning to fall away. ‘There’s been a huge rise in the number of young people experimenting with hallucinogens, predominantly LSD which is at its highest level since 1982,’ says assistant professor of Biostatics and Epidemiology, Andrew Yockey.

‘I think it’s getting more popular due to the recent rise in knowledge about the benefits of these medicines, such as cognitive enhancement and personality development.’

Likely also responsible is the pandemic-induced mental health crisis that’s brought with it a ‘tsunami’ of psychological problems affecting primarily – over half to be precise – those aged between 16 and 24. Yockey explains that traditional modes of therapy are ineffective for some, and studies show that psilocybin, for example, is a great alternative to reducing anxiety if pharmacological drugs don’t work. It’s for these reasons that more and more Gen Zers are resorting to using such substances at home.

This is ascertained by the National Survey on Drug Use and Health, to which 1.2 million members of the demographic admitted to taking LSD in 2020 compared with 317,000 in 2004. 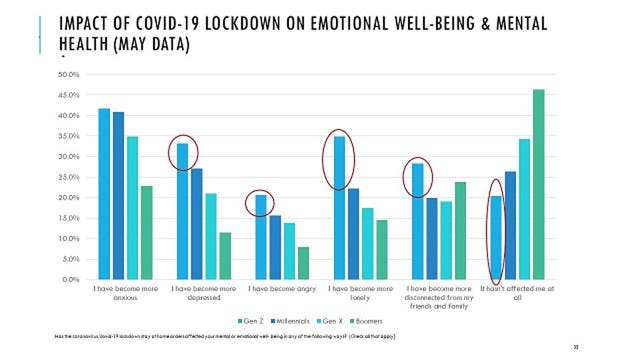 ‘This upward trend is likely partly due to the changing perception about the dangers and possible medicinal benefits of hallucinogen use,’ says psychologist and lead researcher for Monitoring the Future, John Schulenberg.

He adds that though it would be natural to assume Gen Zers are using psychedelics for fun, to escape reality, and cope with lockdowns, Monitoring the Future’s results suggest otherwise.

More often, they are using them as an aid to wellbeing, to deal with stress, and to find relief from psychiatric illnesses.

‘Psychedelics are really versatile drugs. I can imagine for some people bigger doses may have allowed them to work through anxieties the last 18 months have raised for all of us,’ he continues.

‘I think we are in a decade where we all want to feel more connected to ourselves and the world and we need new ways of comprehending the madness that we see around us, especially climate change. I think psychedelics can offer that in a way that stimulants can’t. And they are also pretty safe.’