MSCHF has released nine TikTok sound bites that you can use to talk smack about big companies and you’ll be paid depending on your view count. It’s the definition of an anti-ad.

It’s part of a recent company movement to criticise late stage capitalism via viral trends and stunts. MSCHF previously released a bizarre game called ‘Card v Card’ that had players collectively spend real money via credit cards all linked to the same bank account. If the total spent by all players reached the account’s overdraft then players wouldn’t be able to purchase anything else, meaning small items had to be bought if anyone wanted to actually get anything.

Is it convoluted and ridiculous? Yes, but that’s kind of the point of MSCHF. The company only has ten employees and many of its projects are designed to be jarringly weird. One of its other ideas was to recreate medical bills as oil paintings and sell them off. The money earned back was then used to clear the original debt. Unconventional is the name of the game here.

This new idea is similarly unusual. TikTok users can download parody songs to implement into their own videos on the app, all of which take blows at huge corporate entities and are bluntly critical of top billionaires. The higher the view count, the more money you’ll earn. 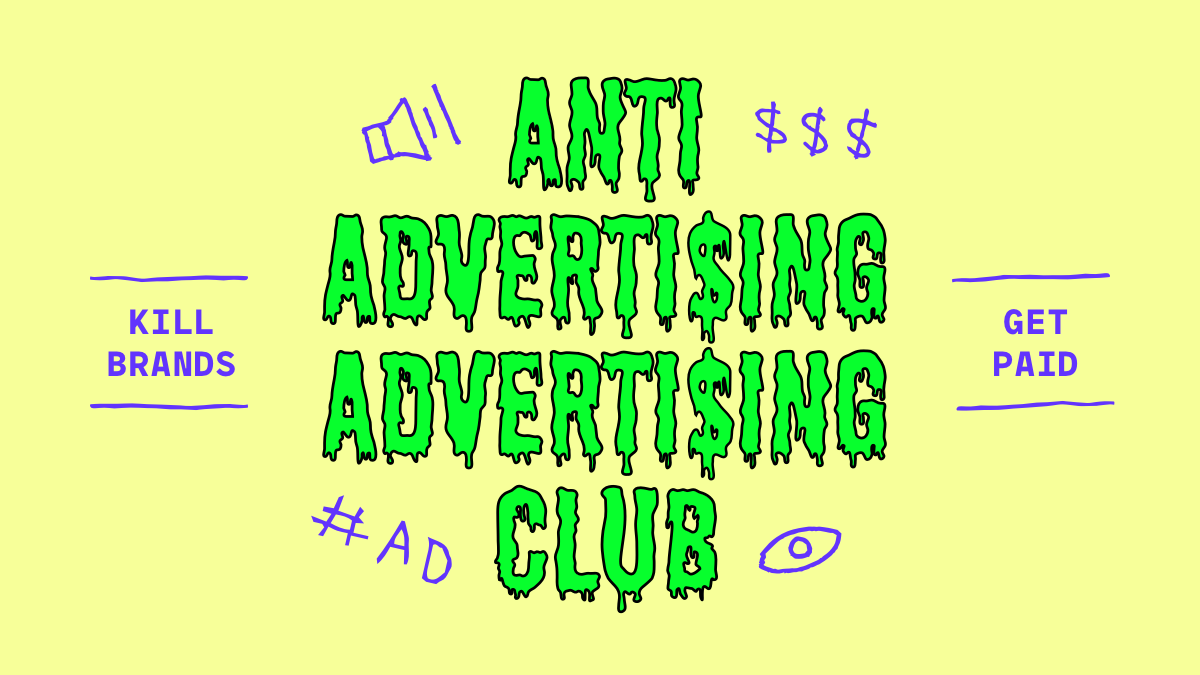 How does this ‘kill brands’ campaign work?

The campaign’s official title is ‘The Anti Advertisement Club’ and each musical snippet is a rework of popular TikTok songs and trends. The MSCHF versions are deliberately provocative and criticise both big brands and TikTok as a platform.

One of the parody samples has the lyrics ‘if you’re ugly and you know it, TikTok will not show it’, for example, which is an obvious dig at the app’s tendency to favour more attractive users. Another track changes the lyrics on Billie Eilish’s ‘bad guy’ to ‘that big boss type, squash your union type’, in reference to Tesla’s allegedly anti-union, toxic workplace culture.

Users are encouraged to create their own TikTok videos using these clips and target specific companies. Facebook, Tesla, Comcast, NFL, Amazon, Fashion Nova, and others are all called out on the official Anti-Ad Club website, and MSCHF provides direct links to download each mp3 file.

You can get $10 USD for earning over 5k views on a single video at the lowest end, and several thousand dollars at the highest end. All you need to do is enter your PayPal and provide a separate video of yourself for verification. After that, MSCHF pays directly to your bank account. 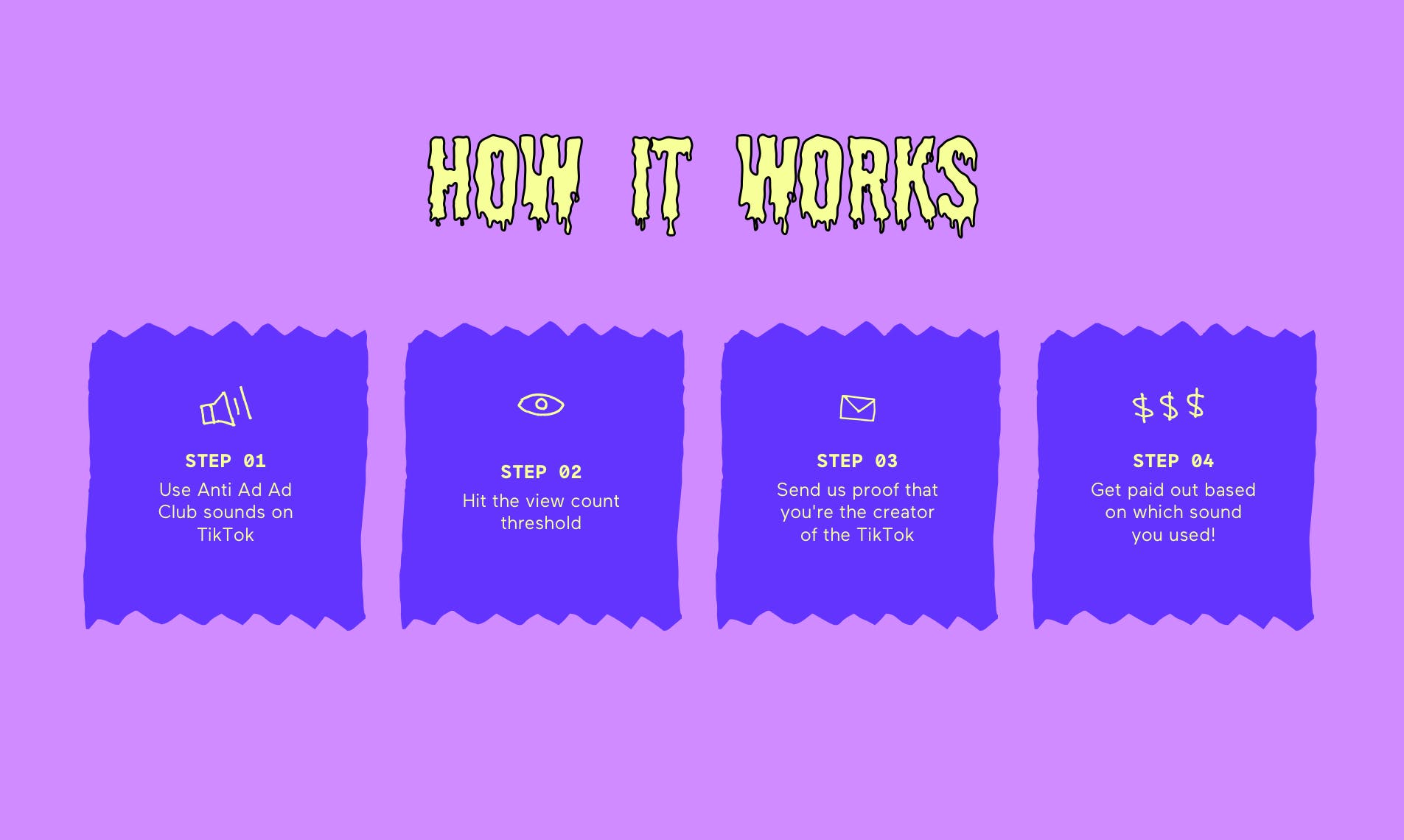 It’s hard to pinpoint exactly what MSCHF is, per say.

Part cryptic art movement and part viral product maker, the company routinely drops mysterious projects every two weeks on its confusing website. These are referred to as ‘drops’ – similar to a Supreme launch or a new fashion collection release – and they can be literally anything. There’s no rhyme or reason to most of what you’ll see, and CEO Gabriel Whaley has previously referred to MSCHF as ‘structured chaos’.

Want one hundred or so videos of a man eating random objects? If that doesn’t tickle your fancy, how about a Netflix extension that makes your screen look like a Zoom call? These releases are just two of 31 ‘drops’ already available, with over forty more apparently in the works. The website includes a handy countdown clock to keep track of each drop, and you can text a special number to gain access to new ones early, if you feel inclined.

Though there doesn’t seem to be any thematic consistency between each product or project, most tend to satirise or poke fun at online trends and behaviours. Its last three have been notably anti-capitalist, which suggests it could be moving in a more politically charged direction.

The company used to run ads to generate profit, but since September 2019 it’s relied mostly on private investment, raising upwards of $11.5 million USD as of January this year. That may explain how its able to pay out influencers for its latest anti-ad TikTok movement, where you can earn up to $20,000 USD if you reach over 5 million viewers. 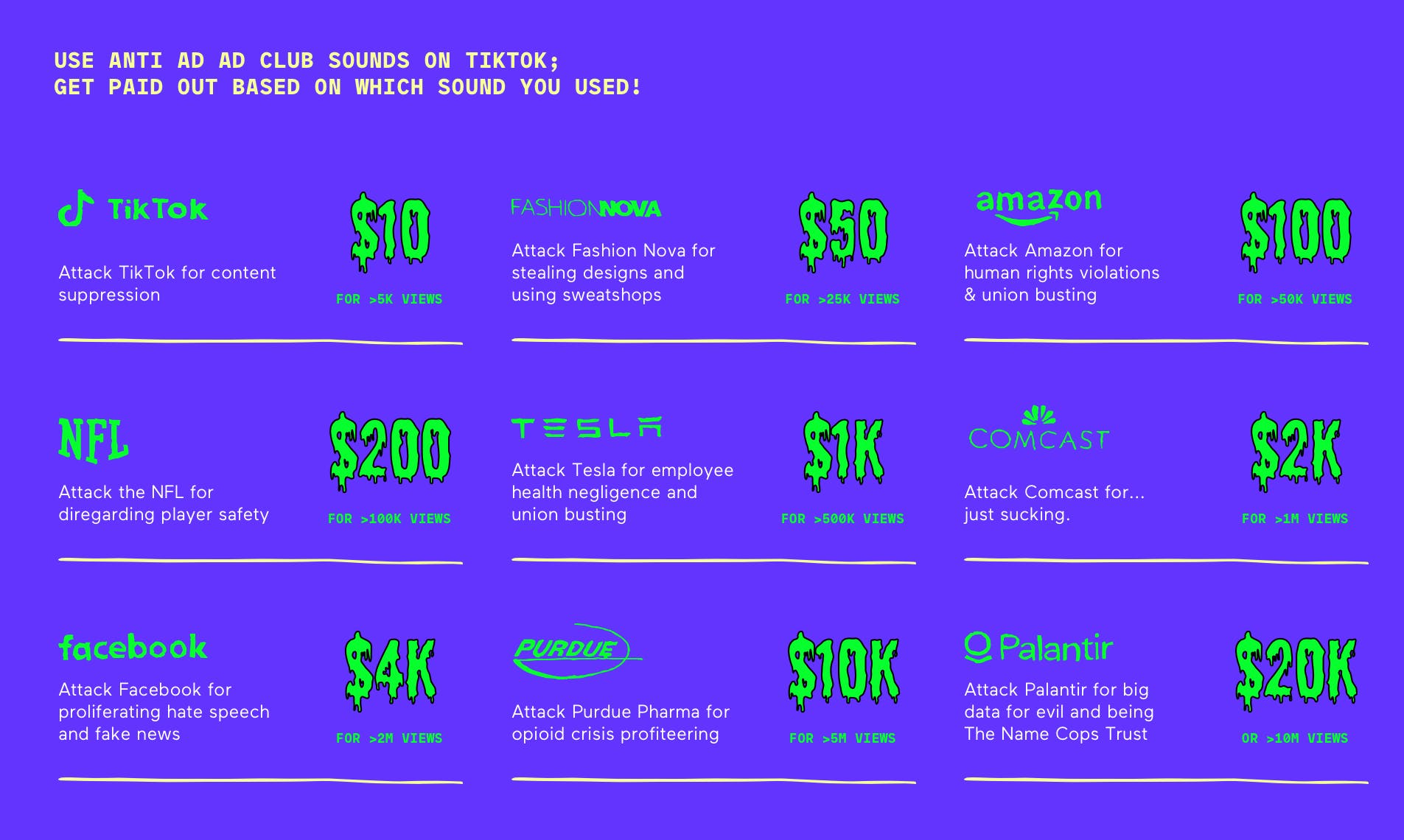 Should we support it?

MSCHF should be credited for launching a campaign that’s uniquely disruptive in the digital, social media age, and for putting its money where its mouth is. Paying users for anti-corporation content is an effective incentive to keep momentum up, even if it is somewhat ironic and a little hypocritical.

I’m all for tearing down TikTok’s dodgy beauty standards and calling out Tesla’s dismissive attitude toward worker’s rights, but it’s worth remembering that MSCHF has capital investment behind it and has used advertisement for big brands to generate funds in the past. It’s not an activism platform usually and its main focus is usually manufacturing junk joke products or quirky apps in order to spread brand awareness. It is a company first and foremost.

I also question how effective this campaign will really be in spreading the word and bringing about real change. Many will be motivated by the potential pay-out rather than genuinely being inspired by the issues that MSCHF highlights. It’s easy to see how the activism behind this initiative could easily get muddied as it continues.

The idea is certainly novel, though, and an excellent way to infiltrate the algorithms that we’ve all become so reliant on for news and daily content. The approach is aggressive and may be the type of force we need to actually get cogs turning and bring more Gen Zers into the conversation, but could equally become diluted with inauthentic TikToks.

We’ll have to wait to see what happens. Maybe you’ll hit it big and grab $20,000 USD with a viral campaign video yourself – just don’t then spend that money on the companies that MSCHF is trying to tear down.