Long criticised for its perpetuation of problematic body image standards, the beauty industry remains in the early stages of addressing its complicity. From the get-go it’s been the small, independent brands like Nue Co. and Hum Nutrition at the forefront of the conversation, maintaining transparency when discussing the mental health of their employees and customers.

Now, ahead of its undisclosed 2020 release, Selena Gomez’s Rare Beauty is getting involved, pledging to raise $100 million towards addressing gaps in mental health services for under-served communities in the US.

Over the next decade, Rare Impact Fund will aim to support those affected by issues such as loneliness (a silent killer, as harmful to our bodies as smoking a pack of cigarettes a day) and hopes to become one of the largest known organisations doing so from a corporate entity.

Funded through 1% of all Rare Beauty sales, it’s being administered by Hopewell, an NGO that works to assist changemakers quickly launch new social change projects. And, while many beauty companies currently scramble to rectify their previous lack of action, the Rare Impact fund is providing them with a stellar example to follow, one of the industry’s most prominent financial efforts in the space to date.

Our goal with the Rare Impact Fund is to raise an ambitious $100 million over the next 10 years to help increase access to mental health resources. How? Starting with our very first sale, 1% of annual Rare Beauty sales will go directly to the Rare Impact Fund. But that's not all. We're committed to raising funds with numerous philanthropic partners to reach our goal. The Rare Impact Fund will help support the local, national, and global organizations that have a direct impact on the well-being of this amazing community. Together, we are better, and because we know we can’t do this alone, we’ve established the Rare Beauty Mental Health Council comprised of leading mental health experts and professionals with lived experience to help steer our impact efforts. To learn more about our resources and support, and to meet the members of our Mental Health Council, head to our IG stories! #RareImpact

For Gomez, above all, the purpose of the fund is to combat loneliness. With Gen Z recently described as the ‘loneliest generation’ in a study conducted by Cigna, her concern is that this has been exacerbated by the Covid-19 pandemic which forced young people (alongside the rest of the world) indoors. Choosing to launch the fund before her own products, Gomez is not only demonstrating that her company’s mental health efforts are more than an afterthought, but acknowledging the power of her platform to do good.

With a whopping 184 million followers on Instagram, making her the sixth-most followed account after the likes of Kylie Jenner and Dwayne ‘The Rock’ Johnson, her support is truly invaluable. Not to mention how honest the singer has been regarding her own battles with therapy, medication, and in-patient treatment for depression, which has been a huge step in the fight towards reducing stigma surrounding mental illnesses.

Though unfortunately, reducing stigma only goes so far if treatment is inaccessible. The National Alliance on Mental Illness (NAMI) reports that only 43% of mentally unwell adults and just 64% of those with serious illnesses will receive treatment for it each year . But this isn’t stopping Gomez, who despite her awareness of the barriers that money, time, and stigma can present, is firmly set on bridging the gap between help and those who need it. 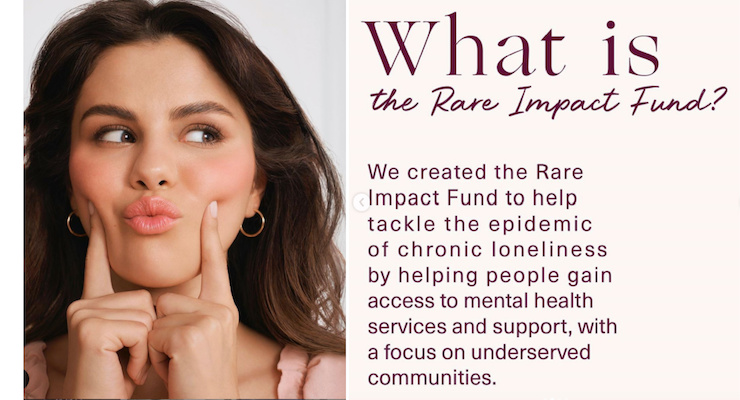 ‘Since the brand’s inception, we wanted to find a way to give back to our community and further support people who needed access to mental health services, which have had a profound impact on my life,’ she said in a statement. ‘The Rare Impact Fund will make a direct impact on many lives and, ultimately, make a difference. Our sole focus is to help people feel more connected to one another and less alone in the world.’

Gomez has also enlisted a council of advocates and experts to inform the direction of the fund’s charitable efforts. Comprised of ten people from medical and academic backgrounds, as well as notable beauty industry figures such as the editor-in-chief of Teen Vogue, Sephora VP Jennifer Cohen, and Lindsay Peoples Wagner, it will ‘guide the company’s strategy to ensure maximum impact.’ ‘The mission with the Rare Impact Fund is to help address gaps in accessing mental health services,’ says director of the Yale Centre for Emotional Intelligence, Dr. Marc Brackett. ‘There is a dire need for equitable access to mental health resources for both children and adults, and my hope is that these funds will help us support those who need it most.’

By fostering direct relationships through community outreach, Rare Beauty has real potential to shape positive stories about beauty, self-acceptance, and mental health. ‘We must make a stand against the idea of perfection by embracing what makes us unique and encouraging our community to embrace what makes them unique’, finishes Gomez. ‘If we can use our influence to shift the narrative around mental health through content and outreach and campaigns, then that’s making a positive difference.’