Amidst shocking revelations of malpractice at clothing factories owned by the fast-fashion giant, the industry’s timid approach to ethical issues is being readdressed.

Boohoo, the online fashion retailer behind popular trend-driven brands like Nasty Gal and Pretty Little Thing, has lost almost £2 billion in value after speculations of ‘modern slavery’ at one of its factories.

The undercover investigation, which was launched by The Sunday Times last week, revealed that workers in Leicester were being paid £3.50 an hour, despite minimum wage for anyone over the age of 25 being £8.72.

Published after a surge of Covid-19 cases in Leicester, the report also claims that the factory in question (Jaswal) had not taken necessary precautions against the virus, operating at full capacity with no access to hand sanitiser or the ability to social distance while working. What’s most unusual, is that workers at Jaswal  – who have now come forward with accounts of lockdown breaches and furlough fraud – have been primarily behind a rapid 45% sales growth for the company – even in the middle of a global pandemic. ‘We are deeply shocked by the recent allegations about the Leicester garment industry,’ responded John Lyttle, CEO of Boohoo Group. ‘We wish to reiterate how seriously we are taking these matters, and we will not hesitate to terminate any relationships where non-compliance with our code of conduct is found.’

Concerns like this are not new. Newspaper exposés and open criticisms (such as that of the Parliament Environmental Audit Committee’s 2018 report) have long been calling for an end to the era of fashion’s ‘throwaway’ culture. The dial has been shifted and with increasing investor focus on environmental governance, negative PR has much more serious ramifications.

‘Let this be a warning to those who are exploiting people in sweatshops like these for their own commercial gain’ says Secretary of State for the Home Department, Priti Patel. ‘This is just the start. What you are doing is illegal, it will not be tolerated, and we are coming after you.’

NEW REPORT// How can @boohoo report 44% growth in the first quarter of this year and shares increased by 22%, DESPITE the global pandemic? Workers report lockdown breaches, furlough fraud and modern slavery in Boohoo's supply chain. #Boowho?https://t.co/GScanP3wCu

Consequently, announcing an immediate independent review of its supply chain, Boohoo will be looking into supplier compliance with ‘minimum wage regulations, COVID-19 regulations, working hours and record keeping, and right to work documentation and contracts of employment.’ It has also pledged £10 million to eradicating any malpractice still taking place in the UK.

In light of the news, Boohoo’s army of influencers (essential to the brand’s success as celebrity endorsements greatly appeal to its specific target market) have additionally terminated their involvement, and major retailers such as ASOS, Next, and Zalando are pulling all Boohoo clothing from their virtual shelves. Forever 21 and the death of fast fashion Bizarrely however, this hasn’t seemed to deter consumer interest, with a large proportion (50% according to a Vogue Business survey) of young buyers still admitting they’d continue shopping at the fast-fashion giant despite hearing about the Leicester coverage.

With Gen Z often praised for being the most sustainability minded generation, this poses an important question: what makes fast-fashion so appealing that consumers are willing to overlook such obviously ethical breaches of Boohoo’s code of conduct?

The winning formula is attributable to a variety of factors. A large number of young shoppers choose to purchase from e-tailers due to their competitive pricing and fast flow of new styles and Boohoo’s speedy delivery, extensive sizing options, and trend-led, influencer inspired clothing has, as a result, proved highly popular amongst teens. 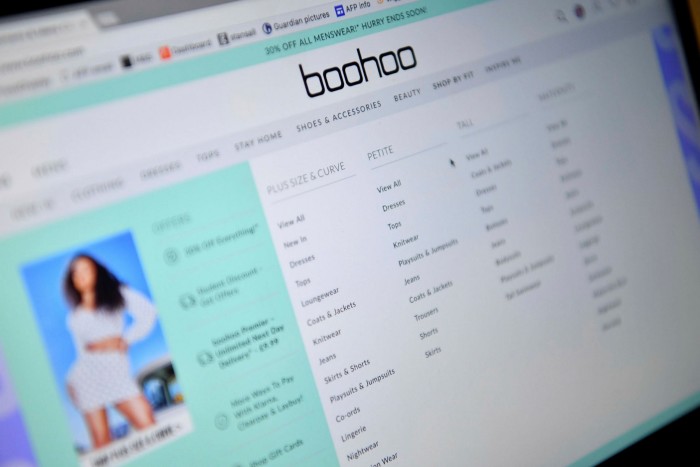 ‘When I’m bored I go through them and I always end up buying something,’ says 19-year-old Mehak Akhter who regularly posts ‘haul’ videos on TikTok. ‘All these brands are affordable; they also offer new discounts every day which make you feel better about spending.’

In fact, it appears that TikTok is largely to blame, a breeding ground for aspiring influencers who have shaped their entire online identity around the promotion of excessive garment consumption. The video-sharing platform, which already faces a great deal of criticism towards the inherent lack of awareness about ethical issues within its community, has recently seen a dramatic boom in the use of hashtags such as #haul and #onlineshoppingaddiction. For those used to posting this kind of content therefore, it may be a challenge finding alternative retailers where they’re still able to afford such a high level of consumption.

It’s difficult to break the current consumption cycle. Particularly at a time when people feel an underlying pressure to follow the latest trends and wear ‘what’s hot’ according to their favourite influencers. But, in addressing society’s behavioural issue with consumerism and the unsustainable notion that we constantly need to buy, issues like Boohoo’s may never have arisen.

The pandemic has provided the industry with a much-needed reset period, and it’s due time brands made change so that consumers can follow suit because there’s simply no longer any space in fashion for those that don’t do the right thing. So, the next time you consider a knock-off version of Kylie Jenner’s outfit an ‘absolute steal,’ remember that if a brand new dress only costs a tenner, there’s most likely an unpalatable reason why.