The rate of global remittance is set to decline sharply thanks to the harsh COVID economy. This could have dire consequences for the world’s poorest communities.

Looking at the worldwide coronavirus statistics, it’s easy to see the virus as a western issue. Deaths and rates of infection are, if the stats are to be believed, overwhelmingly higher in western nations. Whilst the UK stands at nearly 250,000 cases and over 34,000 deaths as I write this, and the US houses over 1.5 million infected and nearly 100,000 dead, Ethiopia and the Congo have less than 400 cases each, whilst Zimbabwe and Malawi are both reporting under 100 people infected (according to the worldometer).

Given the lack of infrastructure and personnel required to handle a pandemic situation in many eastern emerging markets, numbers in these countries coming anywhere close to Europe’s would cause untold devastation. The fact that we’ve (so far) evaded the worst in Africa, The Middle East, and Southeast Asia is one of the only consolations of the COVID-19 tragedy. However, the impact of the virus is starting to be felt there in other ways, as the western economy weighs heavily on all corners of the globe.

Due to the mass unemployment and job insecurity currently sweeping the western hemisphere, The World Bank has issued a prediction that global remittances, or the money sent home from people working abroad, will fall by around 20% in 2020. As the economy grinds to a halt, migrants, who are significantly over-represented in the gig economy, are losing wages and access to remittance services. For many of these migrants, the promise of being able to financially support their families back home was an incentive to move to the west, and their families have come to rely heavily on these supplements to live. 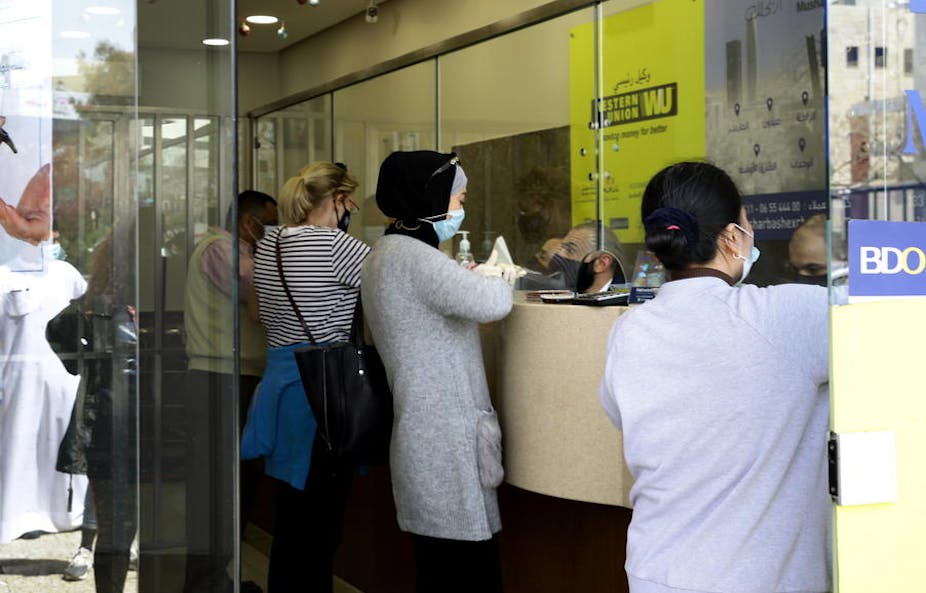 ‘Migrant remittances provide an economic lifeline to poor households in many countries,’ reads the report. ‘A reduction in remittance flows could increase poverty and reduce households’ access to much-needed health services.’

Last year, around $554 billion USD in remittance flow was received by low-and-middle-income countries (LMICs). This is actually a larger amount than all the official foreign investment in these nations combined, making remittance a significant part of the global economy. Now, as shops and work-sites close around the world, freezing the wages of many who use remittance services, this cash flow is set to drop to around $445 billion USD.

All recipient regions will be affected, with the World Bank highlighting Europe and Central Asia, Sub-Saharan Africa, and South Asia as regions which will see a fall of more than 20%. Many of those who receive remittances do not have any other social safety net, so the reduction in remittances will hit them hard. Panu Poutvaara, economist at the University of Munich and member of the German Expert Council on Integration and Migration, told Forbes, ‘I do not expect widespread famine, but tens of millions more are likely to end up in severe poverty. Unfortunately, when the cut in remittances is combined with other shocks hitting poor countries, like the collapse of tourism and steep declines in exports, there is going to be a steep increase in global poverty.’ 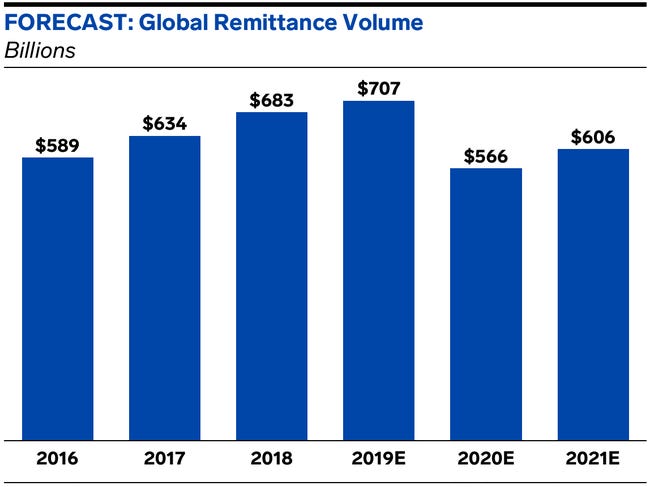 Some, such as Michael Kent from remittance service Azimo, think the World Banks projections are too pessimistic, feeling that Citibank’s recent 5-15% projected decline is more realistic. Whilst in this interview he expressed concern for migrants in the GCC or gulf regions (such as the UAE) that rely on income from the oil industry, he also stated that ‘things will be much better in Europe where migrant populations are more entrenched, and governments will support incomes much more.’

Whilst it’s true that furlough and universal income schemes have kept much of Europe afloat during the pandemic, the large number of migrant workers on zero-hour contracts means that many of these benefits won’t be felt in migrant communities. Moreover, concern remains for the US, where over one-quarter of the population have filed for unemployment benefits.

The World Bank’s report projects that next year remittance will rise by 5.6% to $470 billion USD, but much rides on the ability for western economies to recover quickly, and safely. Despite saying it would make no immediate changes to plastic production earlier this year, Coca Cola has now announced it will be switching all plastic to plant-based bottles by 2023. I make it no secret around the office that Coca Cola’s advertisement campaigns in recent years have aggravated me to no end. Its emphasis on making ‘recyclable plastics’ and being environmentally conscious has never sat right with me, given that it... Panicked comments over gaining weight and toxic #Quarantine15 memes plaguing social media since the pandemic began reinforce an incredibly troubling narrative. It only takes a few seconds of scrolling through social media at the moment to come across a meme complaining about the possibility of weight gain during quarantine. ‘Gaining weight at university was the freshers 15, this time it’s the quarantine 15,’ one says. ‘I desperately need to social...